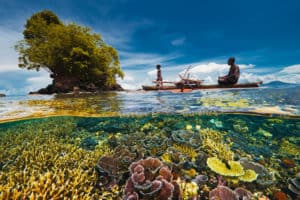 Even though it looks like a plant but coral reef is an animal. Its body is built by tiny animals called polyps that is also known as cnidaria. The group of polyps can be held together because of the existence of calcium carbonate.

This what makes the coral reef is hard as stone and it also protect the coral reef from predators. It lives in the swallow area but there are also some species of them that live in the deeper area, even though only in a small number.

Coral reef also has many benefits such as became a home for some animal (e.g., fish, worms, sponges, mollusk, etc), shoreline protection, and many more. The coral reef is classified as a fragile ecosystem because it is very sensitive. And here are the threats to coral reef that maybe you have never known before.

The coral bleaching is happened because the algae that supplies food for the coral is gone. Even though the coral color is changing into white, the coral can still live even not for long. When they don’t get a proper treatment and nutrient that they need immediately the coral will die because of hunger. Last year, about 90% of coral in The Great Barrier Reef was hit by the bleaching and between 29% – 50% coral died.

Because the coral reef is very sensitive, even the sunlight can harm it. When the sea level is rising, it means the sun light intensity will be decreased. The photosynthetic algae inside them will also less producing the food for the coral because they don’t get a proper lighting from the sunlight to produce the food. And again, the coral reef can die because of hunger.

Pollution such as the factory waste that is thrown to the sea can also kill the coral. This is caused because the waste can change the condition around the coral ecosystem (e.g., pH) and also can be a toxic substance that is eaten by the coral reef. When a strange substance get into the coral reef digestion system and the system can’t handle it, it become a toxic matter that will destroy the whole system.

Without the existence of ozone layer in our atmosphere, sunlight can be a dangerous thing for us. Because of the UV radiation, our skin can be burnt so badly and even can make the skin cancer happen to us. Remember that the coral reef is a sensitive creature, so when the temperature of the sea because of the sunlight exposure isn’t suit with the coral reef needs, it can die.

There are more than 20 type of coral disease that have been discovered. The disease is happen because of so many factors such as infection due to the bacteria or virus, extreme sea temperature, excess nutrient, and physical damage. Black band disease is one from many type of disease that is being caused by bacteria named Phormidium corallyticum. It will destroy the coral reef tissues and kill it slowly.

What makes it dangerous is that, the pesticide that is used by the farmer to grow and protect their plants from the pest can go to the sea both by land or air through the clouds. When this agricultural runoff reach the sea and contaminate it, the pH will be changed a little by little.  This change affect the coral reef condition because coral reef needs a certain pH to live. So, when the pH change, there will be a big possibility that the coral reef go to a further damage.

This is the end of today’s article of threats to coral reefs, I hope you enjoy it! And thank you for still following our website and read every article until the end. Hopefully, every article that we serve to you can help you to know more about what’s happening in the ocean. And also helping you to care more about our environment.

10 Deepest Sea in the World – Depth