Sea grass is one of many plants in the ocean that is so easy to be found. It is because its spread out through all ocean in the world. You can find it in the shallow area starts from the salty water in the sea until brackish water. There are about 75 different species of sea grass in the world that start its existence from 100 million years ago.

As one of ocean productive ecosystems, Sea grass also has many important role to support the development and stability of ocean life. Such as main producer of food chain, as habitat of biota, as catcher of sediment, reduce the movement of ocean water, and sometimes, sea grass also edible to eat.

Also known as marine macro algae, you can find the existence of sea weed in the sea attach the rock surface and another hard substrate. It is known as macro algae because basically sea weed is algae. Based on the type of algae that created sea weed, sea weed is divided into three type which are brown algae, green algae, and red algae.

Meanwhile, there are two types of sea weed. one is edible to eat, and other can not edible to eat. Types of Sea weed which can be eaten are kombu, wakame, hajiki, arame, and nori. Therefore, many fishers sell sea weed and become sea weed farmers due to high order from consumer.

Mangrove is a tree that only grows in the coastal area in the salty water and brackish water. Its ability of living in different type of water habitat with different salinity is that because mangrove has the ability to tolerate salinity. The existence of this tree is helping the marine animal to have a home. Besides that, the existence of mangrove also prevent coastal abrasion happens.

Meanwhile, there are also some benefits of mangrove existence. Both in form of ecological, economic, biological, chemical, and social benefits in all over area in ocean terms.

Also the same as mangrove, sea lettuce also can live in the salty and brackish water. Besides that, sea lettuce that is claimed for having many nutrition also edible. This plant also has a scientific name of Ulva and there are about 100 different species of sea lettuce.

On the other hand, to find this plant is kind of easy because its distribution is wide spread through out the world’s ocean.  Many marine animal feed on sea lettuce as well as human because it contains a lot of nutrition.

Next, for the plants in The Great Barrier Reef is sea grapes. This plant has a scientific name of Coccoloba uvifera and people also known this plant as baygrape. Sea grapes can live until 100 m depth and usually live in the muddy areas. Usually this plant will live adjacent the coral reef.

When you dive maybe you will find this crustose coralline algae that has a beautiful pink color. Besides its beautiful color, coralline algae also play an important role in the coral reef ecosystem as a food for many marine animal. Such as, parrot fish, sea urchin, chitons, and limpets.

Not all dinoflagellate is classified as a plant. This is because, there are also some species of dinoflagellates that is become parasite and some of them can produce light through bioluminescence. 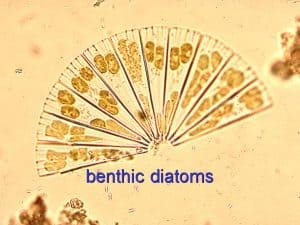 Moreover, there are about 225 spesies of benthic diatom from 54 different genera that has been identified.

Brown algae that can grow until reach its length up to 60 m is playing an important role in the ocean. The existence of this plant is giving some marine animal a home and also food since brown algae also became a food for some animal. In the world, there are about 2000 species of brown algae has been identified.

Kelp is still classified as a brown algae. What makes it different is that, kelp is the largest form of brown algae. It can reach its length up to 80 m with its growth speed that can help it grow about a half meter in a day. In the ocean, kelp will make an underwater forest and supporting many marine animals life.

Phytoplankton is also classified as a plant since it is using sunlight to produce food through a process called photosynthesis. Classified as a microscopic creature does not mean we cannot see the existence of phytoplankton in the ocean.

When phytoplankton exist in a high number in the sea, it will glow because of chlorophyll and pigment in their cells.

This kind of bacteria also using sunlight to help them produce food through photosynthesis. It also can produce oxygen as well. The color of cyanobacteria is blue. The existence of cyanobacteria is helping the earth from oxygen poor that is happens because of so many things such as global warming and greenhouse effect that may cause the number of carbon dioxide number is high.

Also known as Syringodium filiforme, this plant is a food to manatee. It exist until 20 m depth and it also become a food for some other marine animal such as parrot fish, surgeon fish, sea urchin, and pinfish.

Manate sea grass usually live in the sandy and muddy bottom through out the western central Atlantic and eastern central Pacific.

Coral reef that is basically an animal surely will need food support from plants to keep it alive. Besides another microscopic creature such as phytoplankton that support its food, coral reef also feed on algae. Green algae has about 8000 different species starts from microalgae that can’t be seen by eyes until macro algae that has a large size.

That’s all for today’s article of plants in The Great Barrier Reef. Thank you for reading this article until the end and also thank you for the loyalty to keep following our website. There will be more interesting article for you to read and hopefully all of our article can help you to know more and care more about our environment.

17 Plants in The Ocean Biome