Sea Sponges was known as part of unique category. It is half plant and half animal, was known to the Ancient Greek as Zoofitan. It has a unique ability to asexually reproduce and to regenerate from a single cell, yet it has no brain or central nervous system and maintains many plants like qualities.

It is belongs to the world’s simplest living organism. It is located basically everywhere all over the world from polar waters to tropical and to all depths. There are 12500 species of Sea Sponges but only a few of them have commercial values. Usually it’s the Sea Sponges that come from seas of depths of 10-15 meters. Here are 15 types of sea sponges that you need to know : 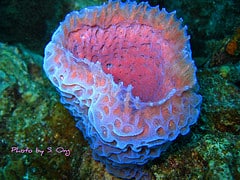 Azure vase sponge also known as Callyspongia Plicifera and it has pink to purple and fluoresces light blue color.

Azure Vase Sponge distribution mostly in South Florida and Bahamas but common to occasional in the Caribbean. It’s habitat most commonly grow on walls and often associated with Sponge Brittle Stars (Ophiothrix Suensonii) 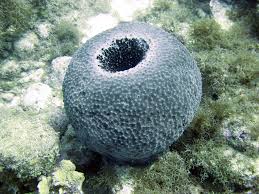 Black Ball Sponge common habitats is on reefs, but also on muddy sands and at bottoms at greater depths. It is prefer brightly lit areas and its distribution are from Florida to the Guyana Shelf.

Black Ball Sponge also knows ans Ircinia Strobilina with ball or cake shaped. It belongs to large specimens and rounded one especially tends to expanded masses up to 20 cm high and 23 cm in diameter,

Meanwhile, it has variant color such as blackish gray on the upper surface and yellow gray near the base.

Boring sponge also known as Cliona and it grows into coral and coral rubble by secreting minute amounts of acid.

Its distribution spread along Florida, Bahamas and Caribbean. The corals interior are more complicated with tunnels and chambers that may eventually harm their structure to disintegrate while their exterior looks fine. 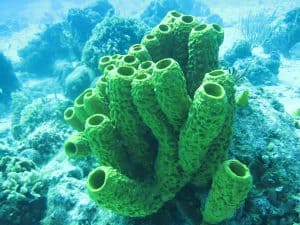 Branching Tube Sponge also known as Ailochroia crassa. It has normally yellow color with blue or green spots, but total bluis specimens can be found and this species grows almost exclusively from reef localities.

Branching Tube Sponge’s distribution spread alng the abundant caribbean, common Bahamas and occasional South Florida. Its rubbery, cheese-like and compressible consistency stick out beyond the dermis. It is considered massive and often lobate to rarely ramose. 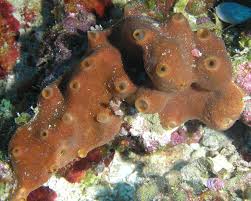 The first one has massive-amorphous, irregularly lobate forms which may or may not have apical osculates. While the other one has more regularly disturbed encrusting forms with 2 – 5 mm high collars. It has firm and rubbery consistency.

Brown Tube Sponge also known as Agelas Conifera. It has light purplish brown and mottled on the surface. Somewhat yellow in the atria, around the base and in the interior. It has semi-incrusting thick branches or lobate masses and the surface is finely rugose to verrucose.

There are three types of oscules. Circular apical oscules which strong, recessed and grown from 5 mm to over 5 cm in diameter. The second one is more elongate and contorted invaginations with higher sides of protuberance with 2 – 3 mm wide and up to 3 mm long.

The last one particularly small with circular crowded vents, only grows about 1 mm wide and 1 – 3 mm apart. It is scattered all over the place in wide areas, contractile and inconspicuous with stiffly spongy consistency. Brown Tube Sponge habitas on reefs and walls, particularly in sheltered environment. Usually Golden Zoanthids and Maroon sponge Zoanthids may grow on its surface. Its distribution area occasionally on Florida but more common in Bahamas and Caribbean.

Ectyoplasia Ferox or Brown Encrusting Octopus Sponge grows in two habits. The first one is thickly incrusting, in could be up to 5 cm thick with a spread of 30 cm or more.

While the second one more massive, erect and frequently compressed with thickly flabelleate, oscules on lateral, horizontally projecting elevations and terminal erect chimneys. It grows up to 10 cm long and gradually tapering.

The oscules are about 2 – 7 mm wide in both types. It has spongy, compressible, resilient and easily torn consistency. It has a very beautiful color on its exterior with rich brownish orange and yellow-orange on the interior. Its distribution are occasionally in Florida Keys, but somewhat more common in the Bahamas and Caribbean. Ectyoplasia Ferox or Brown Encrusting Octopus Sponge habitats in reefs and adjacent areas. It is often grow on coral rubble and dead areas of the reef.

Branching Vase Sponge has a very varible color from lavender to brownish-gray to greenish-gray and occasionally light tan. It is also called Callyspongia vaginalis and its distribution commonly from South Florida, the Bahamas to the Caribbean.

Giant Barrel Sponge has shades of gray color, brown, red brown or rose purple color. It is also known as Xestospongia Muta and it has brittle, incompressible, and easy to break consistency. It’s habitat is on mid range to deep coral reefs and muddy sand bottoms in deeper water.

The specimen are small and display a cone shape form mostly without oscules with a few small openings. This species may be over 100 years old with a rough, frequently jagged stone hard exterior

Green finger sponge commonly found in South Florida, Caribbean and Venezuela. It has black with longitudinal green patches. It is tough and in compressible in consistency. It is known habitats is from reefs and frequently covered with winding chains of Golden Zoanthids.

Fire sponge or Tedania ignis mostly known from sheltered bays and lagoons, on mangroves and among algae. It is belong to the fouling community with bright warm red and occasionally rosy orange color. It is named fire because the species causes a mild skin irritation. It has soft, compressible and easily to tear consistency with 20 cm in horizontal expansion size.

Dark Volcano sponge can be found in coral reefs between 13 and 35 meter. Its distribution rarely spread along in Florida and Bahamas but most common in Caribbean. It is also known as Pseudaxinella zeai with spreading, massive, thick lobes up and chimney like characters. Its consistency are soft and crumbly.

Convoluted orange sponge commonly found in deep areas of coral reefs in about 20 – 80 m particularly in protected location with little water movement. You can also see plants in the coral reefs. The surface is often covered with sediment and algae but this species has yellow to orange color. It looks identical with Didiscus oxeatus.

Chimney sponge mainly has cream with purple spots to purplish yellow color. Its habitats lies only on reefs in Florida, Bahamas and Caribbean. It is also known as Callyspongia Fallax with firmly spongy consistency yet somewhat smooth surface. Its individual lobes are about 2 -3 cm in diameter and tubes size up to 4 cm high.

Chicken Liver Sponge also known as Chondrilla Nucula. It has a dark brown to walnut brown or beige color. The base and inner tissue are light beige to buff and specimens growing in dark areas may be pale.

Chicken Liver Sponge has 2 different habits separated by color and habitat. The first type grows among the most common sponges in lagoons where the loves are attached to the vegetation or the incrustations spreading over rocky substrates or other sponges.

The second type seem to be more restricted to the Millepora terraces and vertical cliffs. Both distribution most commonly belongs from South Florida to the Caribbean. It has somewhat tough and cartilaginous consistency and cover way more larger areas than the first type and it is thinly incrusting on rocky substrates.

There are few sea sponge that can be harvested for commercial use and each continuing to repopulate the ocean floor without interruption. It has been known that sea sponge can live up to 10 years. Some people have raised awareness towards marine life environment including ocean animal, ocean plants and including sea sponges. It is good that people are standing together to protect sea plants.