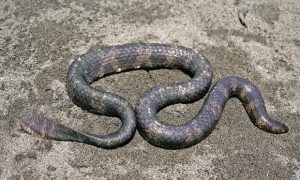 The endangered Short-nosed sea snake is also called the Sahul reef snake. This snake species is venomous and found in the reefs of Western Australia. The colour of this snake is brown with really dark muddy coloured rings all over the body.

Furthermore, the average length that this snake can grow to is around 60 centimetres. Other than that, the head of this snake is quite small. This species sheds its skin more frequently than the land snake. It also has a long lifespan but it also takes a long time to mature. This snake also likes water with depth that’s more than 10 metres. But sometimes it rests on corals where the water doesn’t exceed 2 metres deep. 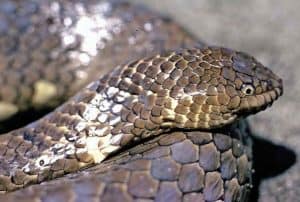 The Leaf-scaled sea snake is a critically endangered venomous sea snake. It is found on the islands of Ashmore and Cartier in Australia.

Similar to the Short-nosed sea snake, this species also prefer to live in water with a depth of 10 metres. The average lifespan of the Leaf-scaled sea snake is 5 years. However, it can live up to 8 or 10 years. (Read: 20 Threats to Marine Life)

Due to its rarity, it was once considered to be extinct. Its last habitat was in the Timor Sea, specifically the Hibernia Reefs and the Ashmore island. Reportedly, it was there where the whole species disappeared. But then in the late year of 2015, it was discovered that they were living among the bed of seagrass in Shark Bay, Western Australia. Habitat degradation is thought to be one of the factors affecting the decline of this species population. 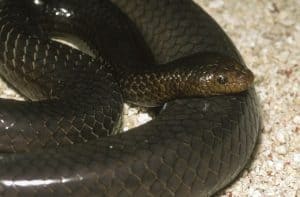 Another endangered sea snake is the Timor Reef snake which is also often called as the Dusky sea snake. This snake is a native species of the Timor Sea. The colour of its body tends to vary from brownish-black or purplish-brown.

This species may grow up to an average length of 78 centimetres although there are reports where others can grow longer than that. Moreover, it can also live up to 10 years. It prefers to stay around reefs where the water is shallow. However, some are found in the depth of 30 metres inside the water.The Timor Reef snake loves to eat eels as well as fish eggs. (Read: Solutions to Stop Overfishing)

There is a huge decline of this species. It is said that the population has experienced a 70% decrease. The main culprit for this population decline is mostly due to the increasing occurrence of coral bleaching. Also, the species is also affected by the poor health of the marine ecosystem it inhabits. 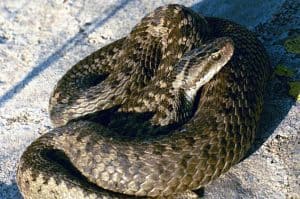 This particular species is also endangered and on the risk of going into complete extinction. It is a native species to the eastern Arafura Sea.

It is also found around the coasts of Australia and New Guinea. The Large-headed sea snakes also inhabits rivers or continental shelf waters where the sand is soft. The snake has a bigger head than its body and its body has black bands all over.

The Large-headed sea snake has a lifespan of 12 years. It also takes many years for it to fully mature as well. Moreover, the process for reproduction takes a very long time too. The diet of the Large-headed sea snake is dominantly fish. The species has experienced continuous decline of population for the past 25 years. Trawling play a huge role in the decline of this species. Due to the high numbers of trawling many of them die. (Read: Decomposers of the Ocean) 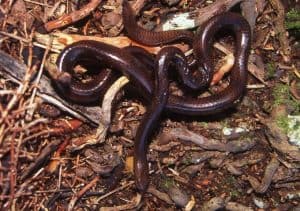 The Rennell Island Sea Krait can only be found in the Solomon Islands. To be specific, it resides in the freshwater lake of the islands. Not a lot is known about this species because it only lives in one location. But from all the research gathered so far, it is thought that this species only reproduce within a certain period.

The Rennell Island sea krait eats fish. The population is at high risk of declination because it only lives inside the lake. Any disturbances and pollution in or around the lake may pose a serious threat. Coastal development, extreme weather and water pollution are some threats that are concerned to have a negative affect to the already vulnerable species. (Read: Herbivores in the Pacific Ocean) 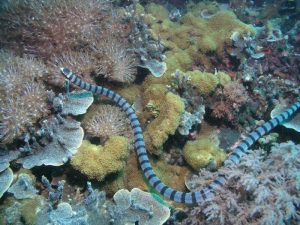 This sea snake is one of the sea snakes that has a deadly venom. However, it does not see humans as its prey so they rarely attack unless aggravated. The venom is mostly used for its food. (Read: Types of Ocean Birds)

Its diet consists mostly of eels. The snake is said to have an amphibious quality because it is able to leave the water often. The female species of the Yellow-lipped sea snake also lay their eggs on land. It can lay around 5 to 13 eggs at once. 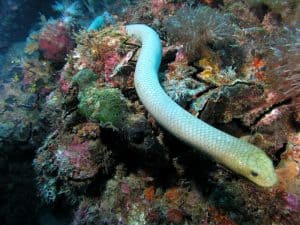 This endangered sea snake can only be found in the Southern parts of Papua New Guinea. Not a lot of information is available for this sea snake due to its extreme rarity. It mostly inhabit coral reefs and other shallow areas. Its diet is mostly eels.

Similar to other species of sea snakes, this snake also needs land even though it is able to swim in the waters. It emerges to land when it needs to rest, digest, peels off its skin. The female species especially needs shallow land so it can lay its eggs.

This species is threatened by numerous habitat destructions. Coastal development and mass bleaching of corals reduce its chance of survival since it no longer has a place to live. Since the female species needs a rocky, shallow area to lay its eggs then rising sea level is also a major threat. If the sea level continues to rise, then most rocks would likely be submerged in deep water. This already threatened species could as well be extinct. 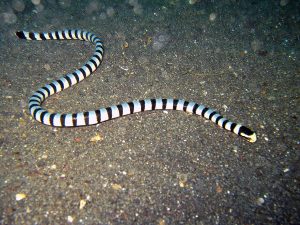 This venomous snake is a native species to the Pacific Island nation of Niue. The length of this species can reach 1 metre. This dangerous snake has a tail that is structured similar to a fin which helps it to swim around.

The female species of this snake often look for shallow areas of sea caves to lay its eggs. The eggs will take around 6 months to hatch. Once the eggs hatch, the young sea snakes will then swim into the water.

The Flat-tail sea snake is highly endangered and may face serious threat of extinction. The loss of habitat is a major culprit for its demise. Other enviromental degradation such as the ever increasing occurrence of the mass bleaching of corals also reduce its population. Tropical storms such as cyclones also act as a threat to the species since it is vulnerable to extreme weather conditions. 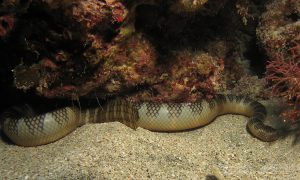 The Chinese sea snake lives in the Pacific Ocean since they prefer waters with warm temperature. It also often inhabit the coral reefs. The Chinese sea snake is a nocturnal creature because it barely shows any activities during the day. This species can grow up to 170 centimetres. (Read: Types of Small Ocean Fish)

Its diet is mostly fish among the corals or eels. This species is also venomous. Its venom is more powerful than that of a Cobra. Its bite is able to paralyse its prey and rarely used to attack humans unless they are in danger. Similar to the other species of snakes, the female Chinese sea snake also lay their eggs on land. This snake is often consumed as a soup in southern Japan. It is said to have a similar taste to tuna.