Oceans are the place for every marine lifes, from the tiny like zooplankton until the biggest like whales. In the ocean, there are many different types of ocean habitats in wich plants or animals live. Habitats are the natural place for living and growth for every marine lifes. Also habitats are place to keeping safe these all marine lifes from the threats. It can be predators, disaster, human activity and others. Here now the information about the types of ocean habits we should know. 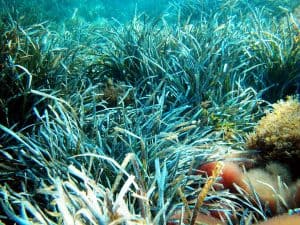 Coral reefs are houses of ten thousands marine species. Coral reefs are found all around the world in tropical and subtropical oceans at depth of less than 50 meters. Corals are sometimes mistaken as being a rocks unlike rocks, corals are alive. The coral reefs grow best in warm water (21-29 Celcius degrees).

There are over 2.500 kinds of corals 1.000 corals are hard corals and others corals are soft corals. Soft corals have skeletons that are flexible and can bend with the waters. In reefs there are three types of coral reefs are fringing reefs, barrier reefs and coral atoll. Fringing reefs are grow directly along from the shoreline and surrounding islands.

Fringing reef is the most common of the trees. It may grow hundreds of yards from shore with numerous seagrass meadows and patch reefs. Next, barrier reefs are parallel the coastline but separate by deeper, wider lagoons. More than 1.500 fish species live on the reefs and not only fishes, sea turtles, sea snakes, whales and dolphins have been record in barrier reefs. The largest and most famous barrier in the world can be found at Australia. Last, coral atoll is a ring-shaped coral reefs and that encircles a lagoon completely. Most of atolls are in the Pacific ocean and only found in tropics and subtropics. 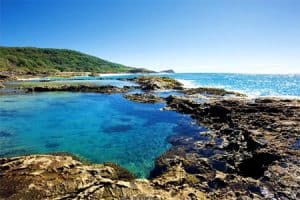 Rockpools or tide pools are located in between high and low tides in one of  three intertidal zones. The high tide zone is the furthest away from the ocean, plants and animals living here have to be able to survive long time out of the water. Middle tide zone are covered and uncovered twice a day by seawater, so creatures found here have have to be able to live in place.

Then, low tide zones are closest to the ocean and are always covered  by waters. Creatures calling this zone home can’t live without water for very long.

In a tide pools, there are many creatures that live in such as sea anemones, mussels, barnacles, crabs, sea cucumbers, seaweed, algae and lots of tiny fish. They must also be able to hide from hungry shore birds and the drying rays of brights sunlight.

Meanwhile, on hot sunny days some tidal pools can dry up completely. Living in tidal pool is not easy for the creatures because the tide pool is always changing. A water level that change all the time, also temperature of their pool from cooler to warmer. And the amount of salt and oxygen they find can be changed by falling rain or the drying sun. 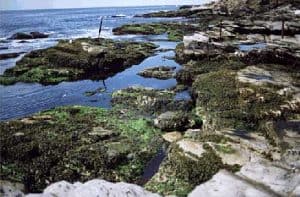 Inter-tidal zone area between high and low tides it has four distinct physical subdivision based the spray zone, and the high, middle and lower inter-tidal zones.

Each sub-zone has a characteristic and distinct biological community. The Spray zone is a part of the land than an ocean . It is submerged only during rare, very high tides or severe storms, but it repeatedly wet by splashing waves and wind-blown spray.

Usually, in spray zone we should found lichen and periwinkle snails. High inter-tidal zone is flooded during the peaks of the once or twice daily high tides, and out of water  for the long stretches between. In here lives blue-green seaweeds and purple shoreline crab. Next, middle intertidal zone is generally submerged, except for a fairly short period during the turn of the low tide. Most of mussels bed, sea urchin, snail, sea stars and anemones lives in here.

Last, low intertidaal zone is exposed only during the lowest spring tides. This area is teeming with life and there is also a great biodiversity. Organisms in this zone generally are not well adapted to periods of dryness and temperature extremes. Some of the organisms in this area are abalone, anemones, brown seaweed, chiton, crabs, green cucumber, sea lettuce, sea palms, snail,sponge and others. Creature in this area can grow into larger sizes because there is more energy in the localized ecosystem. 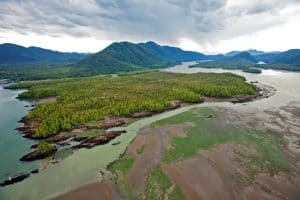 Estuaries are areas of water and shoreline  typically found where rivers meet the ocean. Many different types of plant and animal communities call estuarie home because their water brackish it’s mean a mixture of fresh water draining from the land and salty seawater.

This unique combination of salt and fresh water creates a variety of habitats for the plants and animals to live in.

Some common estuarine habitats are oyster reefs, kelp forest, rocky and soft shorelines, submerged aquatic vegetation, coastal marches, mangroves, deep-water swamps and riverine forest. Estuaries  are among the most productive ecosystems in the world. Many animals rely on estuary for food, places to breed and immigration stopovers. So, then estuaries are very important to the lives of many animals species because estuaries are nurseries of the sea.

Moreover, Estuaries provide a safe haven and protective for small fish, shell fish, migrating birds and coastal shore animals. Beside the animals, people enjoy living near estuaries and the surrounding coastline. They sail, fish, hike, swim and enjoy bird watching. An estuary is often the center of a coastal community. 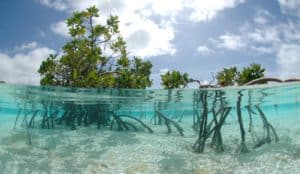 Mangroves are another salt water habitat along the coast. These area are covered by salt tolerant mangroves trees and are important nursery areas for variety of marine life.

Like in the mangroves around of the root, barnacles, oysters, mussels, sponges, worms, snails and small fish lives here. Beside around the root, some animals live in mangrove water  such as crabs, jellyfish and juvenile snappers.

As you know  that young sharks spend their first year around the mangrove swamps and feeding on small fish.The food chain mangroves begin by transforming the sunlight into energy and that food support microorganisms that in turn support larger and larger animals. Pieces of leave are attacked by bacteria,fungi and yeast then that break down leaves particles consumed by protozoa and microscopic animals. Other leaves that fall into the water are broken up crabs and snails in turn provide nutrients for other life forms.

These are all found the animals who live in mangroves, important to keep our mangrove forest save from the threat like over fishing, dumping of garbage, surface mining and others threat that make mangrove threaten. Because mangrove forest is vital to people that live in coastal areas, providing them with fish and other seafood and offers protection from storms and tsunamis. Also mangrove is a home of many terrestrial animals. 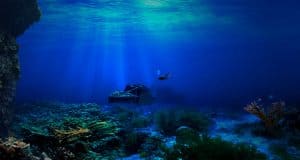 Deep sea is the part of the ocean that is perpetually dark is 103 million square miles area. In the deep sea animals have to live in a very cold, dark or with little or no sunlight penetrates and high pressure environment where they can’t see a thing.

Meanwhile, to survive there, they have evolved some very strange adaptations. Some make their own light and ability called bio-luminescence , while others are totally blind. It’s even harder to imagine anything live in here.

However, the researchers are discovering that thousands of fascinating animals. Many of these animals look quite alien to us.  Some have huge eyes or eyes on long stalks. Life in the deep ocean is largely dependent on the dead material and droppings that sink down from above. 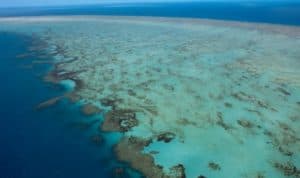 Shallow seas are defined as marginal or inland extensions of  ocean with average depth of about 200 meters. There are thousands of types of living things at the bottom of shallow parts of the ocean. Some live in place where the ocean floor is sandy or muddy.

Others live in places where the ocean floor is rocky. Where the shallow ocean floor is sandy or muddy, there are often animals like sand dollars, sea stars and crabs.

Some fish and sharks prefer to live near the bottom just above the sand. Sea grass, which looks like a lawn of tall grass, sometimes grows in the sediment. Many animals that live in the sediments are deposit feeders, eating sand or mud and digesting the organic material in it. Where the shallow ocean floor is rocky  and the water is cold, habitats called keep grow from the ocean floor all the way to surface of the water and it’s about 20 meters. 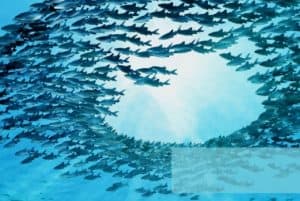 Open ocean also called with pelagic zone, is the largest area of the marine ecosystem. It reaches from coast to the middle of ocean. The livings that survive in the open ocean need to have away to float or swim. The area of  open ocean where sunlight shines through the water is called the photic zone.

On the other hand, in the photic zone, most life is found. Swimmers including fish, such as herring and tuna  swim schools while others swim alone also whales and sharks.

Finally, those are complete explanation about how many habitats that live in Ocean. As well as their characteristics and also existences in order to keep ocean life sustainable for a long time. Therefore, we must keep their habitats well to keep the balancing of our nature life.

Types of Soil in the Ocean – Characteristics