17 Plants in The Coral Reef – Characteristics

Diversity on the ocean can be seen around the coral reef. Yes, coral reef is an animal that basically still need support from the other plants to make them alive. Coral reef will have such a symbiosis relationship with the plants so both of them can get their own benefits to support their life. To let you know more about the plants in the coral reef, in this article I would like to share you with some of the plants that live around the coral reef ecosystem. You can also see another related post that can help you to develop your knowledge about the deep ocean.

Phytoplankton is become one important key to the ocean lives. It provides food for many marine living being because it can produce its own food unlike us human or animal that still depend on plant. Its other name is micro algae because it is still classified as an algae family. What is unique from phytoplankton is that it can capture sunlight so it will glow at night. The more light you see in the ocean water it means there are a lot of phytoplankton there and it also can indicate that the place is well.

Just like dinoflagellates, diatom also classified as protist even though it is an algae. What makes diatom unique is that it has transparent cell wall made from silica. And as you know that silica is the main ingredient to make a glass. You can also find diatom in any kind of water habitat so it is not only exist exclusively in the ocean near the coral reef.

Even though it is a bacteria but cyanobacteria has chlorophyll that can help it to produce food through photosynthesis. Cyanobacteria is unicellular cell but they live within a group or colony. This kind of bacteria also becae the largest and the most important bacteria group on earth.

Next, we have zooxanthellae. Zooxanthellae is became one of the most important beings in the coral reef. This is because it helps coral reef by providing food. Without the existence of zooxanthellae that might be caused by stress or temperature difference it can die and cause the coral bleaching because coral reef has lost one of its food resources.

Sea weed is the plants in the coral reef that is edible to eat. Many people consume it as delicacy such as nori. You can find sea weed all around the world and up to now there is no known poisoned sea weed. Usually you will find sea weed in the depth between 8 m to 40 m but there are some species that could be found in the depth of 250 m.

Basically sea lettuce is sea grass but what makes it different from sea grasses generally is that its leave is translucent. Its leave also look alike with the land lettuce that is why it is called as sea lettuce. People may also known sea lettuce as green laver. And you can find this plant in the rocky substance along the coastline in the shallow area. It also can tolerate brackish water unlike most of the marine plants.

Kelp has an ability to grow so fast compare to another plants. It can grow up to 60 cm in a day and it can reach its length up to 100 m. In the sea kelp will live within a group can creating kelp forest that can support the life of many marine beings. Usually kelp will live in the sea with the depth of 40 m but there are some species of them that live deeper.

Algae has so many species start from the unicellular cell until multicellular cell are exist. Even though algae does not have real roots and leave but it has chlorophyll to help to produce its own food. Besides that, it also help us by producing and maintaining oxygen. There are some species of algae such as red algae and blue algae that have a close relative to the land plants.

Neptune grass is also known as tape grass and it is native to the Mediterranean Sea. It can also be found until 33 m depth. It is also classified as flowering plants because it has flowers. If kelp has the fastest ability to grow in the sea, the neptune grass became the slowest plant to grow.

Eelgrass is one of the species of sea grass so it is also classified as flowering plant. Its leave can reach its length up to 3 feet. This plant also support some marine beings by being their food or shelter. Because of the existence of pollution and another development, the habitat of eelgrass is decreasing because it also can live from the place that has high nutrient. 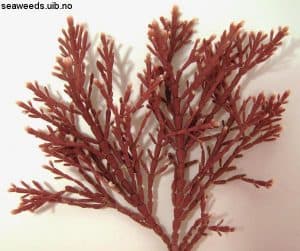 This plant has a scientific name of Corallina officinalis. Usually it can be found in the rocky substance in the shallow area. Its length can reach up tp 120 mm, maybe because of its small size we can classified it as a small plant in the sea. It is also produce calcium carbonate to strength its thallus. And this plant can only live in the salty water which is in the sea.

Toothed wrack or serrated wrack are the other name of this plant. It is also known as North Atlantic Ocean sea weed because it is native there. So you can find it along the Atlantic coast around the rock and rocky shore. Its color is brown and it grows up to 6 feet long. This species of sea weed is also being used in cosmetics as one of the ingredients.

Basically Posidonia australis is a scientific name of one of the type of seagrass that grows in the Australia. And mostly people there also know it as fibreball weed. The existence of this plant is really important because it has the ability to decompose detritus along the shore line. It live in the shallow area so you will usually find this plant from the depth of 1 m to 15 m.

Coralline algae is basically red algae that attach to the coral and it also has so many color. Even though mostly all of them has pink, magenta, red, violet and purple but there are more various color of them. They can also has blue, white, yellow, and green color.

Next, we have mangrove as a plant in the coral reef ecosystem. There are about 80 different species of mangrove tree all around the world. And all of them is tolerate the soil and low oxygen habitat. This is why mangrove is a right plant that grows in the coastline. Mangrove also has the ability to stand and slower the impact of tides to the land.

That is all for our today’s article hopefully this article can help you to know more about plants diversity in the ocean around the coral reef. And also thank you for reading plants in the coral reef article until the end. Do not forget to keep following our website because there will be more interesting article to read for you.