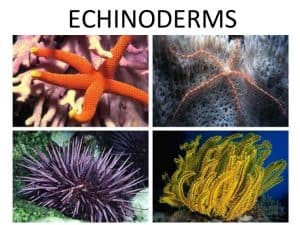 Echinoderm is one of the ocean animal that can be found nearly in every depth of the ocean. This phylum of animal has about 7,000 species.

Some marine animal that is classified as echinoderms and known by people are sea cucumbers, sea star or star fish, sand dollars, and sea urchins.

Even though echinoderms look like a tame animal that does not have a significant role in the ocean but actually it has. Since there are not so many people realize about the importance of echinoderms in oceans I would like to share you with some of it importance in the ocean ecosystem.

1. Take an action as a water filter

All echinoderms actually have no blood. To replace blood, they have this water vascular system in their body. Just like blood, this system is helping echinoderms to do things with their body such as to absorb food, transportation inside the body, respiration, and etc.

Through this system too, the ocean water that is coming into their body can be filtered and turn out to be a clearer ocean water.

Next up, most echinoderms is known as an omnivore where they feed on almost everything. This may be a plus point from echinoderms. It will usually eat the dirt in the ocean as well as sick fish.

By doing this echinoderms can actually prevent the spread of the disease that may come out from the sick fish.

Habitat is a home to a living beings. To make you comfortable with a place you are living in somehow you need to maintain the cleanliness and any other thing that make a habitat stay like what it is. The existence of echinoderms somehow can help the habitat in the ocean to stay like what it is.

Having a role as a balancer also become one of the importance of echinoderms in oceans. Without the existence of echinoderms, the ecosystem may unbalance because echinoderm place cannot be replace by another animal.

Besides that, a role that is being done by the echinoderm also cannot be replace by another animal. Each living beings has their own role toward the ecosystem.

It is classified as an omnivore and by eating the dirt in the ocean floor it it cleaning up the ocean floor and make it clearer. Clearer ocean ecosystem will be able to help the living being within the ecosystem to live better and comfortable.

There are lots of echinoderms species and one of them is known as sea star or star fish. Sea star is feed on sea urchin.

And because of this feeding activity, sea star somehow maintaining the amount of sea urchin population in the ocean to stay in balance, not too much but not too little. When

Food chain alteration will happen if there is one species extinct from the ecosystem. One species gone and it can change the whole food chain system.

If there is no echinoderms or echinoderms will go extinct in the end this means that there will be a change for diet habit of echinoderms predators. Which can also change the behavior of all ocean animal because they are connected to one another inside the food chain.

Another importance of echinoderms in oceans is that its role as a maintainer of seaweed habitat. To make it more specific, actually sea star is the one that is responsible for this role.

It feeds on sea urchin and maintain the population of it so, sea urchin won’t eat much of seaweed and make it extinct. Maintaining the habitat of seaweed is also important because seaweed is important not only to one specific animal but also to many living being in the ocean.

9. One of the predator in the ocean

Echinoderm is known as omnivore which means it can feeds on both plant and animal. This also means that they are predators since they also feed on another animal such as fish.

10. Important prey to other animal

Since echinoderms is known as herbivore and feeds on almost everything including the dirt, echinoderms can clean up the ocean ecosystem somehow.

Coral reef is one of the ecosystem that need a specific standard of clear and stable ecosystem. Echinoderms that has a role to clean the ecosystem can maintain the clear ecosystem for the coral reef to live and grow. This will also prevent coral reef from bleaching.

Echinoderms has a role as a predator which means they will feed on another living beings below them in the food chain. This means that they are maintaining their prey population in order to maintain the amount of plant as well.

When the amount of plants is balance and it can produce oxygen this may help our earth temperature to be in balance. This has become one of the indirect importance of echinoderms in oceans.

Ocean plants is distributing more than 50% of oxygen for the earth. Its distribution of oxygen somehow affecting the temperature of the ocean water it self.

Without echinoderms maybe the oxygen supply can be decreased slowly. Echinoderms feeds on sea urchins and another ocean animal that feeds on plants or known as herbivore.

Those are the importance of echinoderms in oceans that I can share you with. By reading this article somehow you will know better that each species or living being in the ecosystem has their own role to support the ecosystem.

The existence of each species should be maintained since it can alter the ecosystem itself. Thank you for keep following our website this means that you are aware towards the environment around you especially ocean ecosystem. May you can find another article in our website such as importance of ocean in hydrologic cycle.

15 Importance of Starfish In The Ocean