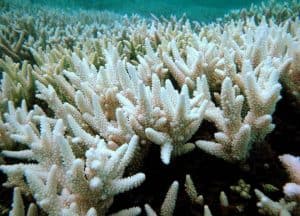 Coral reef is one from many ecosystem that exist beneath the sea. It has the ability to support the living of marine live because it has become a home and a place of food resource for many marine animals. But sadly this beautiful and colorful animal is so fragile.

There are so many factors that can easily affect the coral reef’s life. A certain constant temperature and pH are two from many requirement that allows the coral reef to live.

Those are some from many causes of coral bleaching and so when the temperature and pH change it will let the bleaching occur. The bleaching may lead the coral reef to death slowly, it also shows that the algae and phytoplankton inside the coral reef is died and can’t distribute food for coral.

Pesticide that the farmer usually use to prevent pests from their plants is not always bring a good impact toward the environment. Just for your information, many kind of pesticide can change the soil pH level become more acid. And when the water pH where the coral reef live is changing it also can become another factor that caused the bleaching toward coral reef.

As you know that coral reef is relying on the existence of algae inside its cells. Algae will need the sunlight to do a photosynthesis to produce food for the coral reef. And when oil from the ship is spill to the sea and covering the coral reef body’s surface, the algae will die and lead the bleaching toward coral reef.

Many fisherman will use dope in order to catch more fish. The use of dope also make the fisherman’s job easier. But again, because dope is a chemical substance it also can change the water pH and lead the coral into bleaching.

Almost all visitor of the beach will do such an activity in the beach. Such as swimming, diving, or even only playing with the sand. When you are choosing to go into the sea to swim for the example, you will use sunblock which will decay into the sea and it also can changing the sea water pH because it contains a chemical substance that will be the causes of coral bleaching.

Air pollution can be many things. Ship that sail in the sea also become a contribution because of its chimney. There are also exist some mining in the sea which sometime also polluting the air because of the smoke created from the mining machine.

As you know, there are a lot of factors that create the global warming exist. Such as, pollution. When the global warming happens it means that the earth temperature will become warmer. And this is also bad because the sea and the ocean will absorb about 30% of the temperature and when this is happened the coral reef will also being affected because it needs a constant specific temperature to live.

Deforestation will not only bringing a bad impact such as landsliding or flood. It also can lead the coral reef into bleaching. With less tree there will be less oxygen to produce and it is easier to increase the earth temperature. Because of this many people including government are committed to protect the coral reef by creating such a marine protected areas.

There are so many vehicle exist in our surrounding. To make the vehicle work, it will need a fuel and in exchange because of the use of fuel there will be an emission out from the vehicle. And this also become one of many factors that caused the global warming that in the end become the causes of coral bleaching.

There are a lot of factory surround us. Even in the coast or near the sea also exist some factory that making a product from the marine animals such as fish, shrimp, and etc. These factories are for sure having a waste after they produce something and the waste can be in any form such as air and water pollution. Basically coral reef need a clean area for them to live so when it is polluted they will at first having a bleaching and die.

Our earth is protected by ozone. Ozone is helping us not to get exposed by sunlight directly because that will be so harmful for the earth’s living. The problem is that, nowadays many people using AC to make a room become cooler. AC contain a substance called as CFC that can make the ozone layer become thicker and it even can create a hole in the ozone layer. This will be harmful because when the sunlight exposing the ocean water directly and increasing the temperature there then the coral reef can bleach.

As you all know, there are so many beaches that near with the mountains. And within the mountains exist trees that usually get fires because the area is too hot. The smoke from the fires may also affecting the temperature beneath the sea where the coral reefs live.

Storm is one of many natural disaster that may happen in the ocean. The existence of storm also can destroy many habitat including the coral reefs ecosystem. There are a lot of types of ocean storms that may causes of coral bleaching with different speed and ability to destroy something. Not only causing the direct death toward the coral reef but when the storm happen it may lead bleaching and let the coral reef dies slowly because of the material that the storm bring within that can covered the coral reef from sunlight.

Besides storm, tsunami is another natural disaster that may happen beneath the sea. Tsunami occur because of the earthquake underneath the sea. The big wave from the sea will go and sweep the land before it goes back to the sea. And when it goes back to the sea, many dirty material is being brought by the wave and those materials can harm and covered the coral reef. You also must know about Causes and Effects of Tsunami.

Unfortunately, there are also another device that using CFC which is hair dryer. You should be so familiar with this beauty device. The problem is that many of this device also contain CFC that can make the ozone layer become thicker.

Again, another thing that is created to help human beings work but contain CFC is spray. Any kind of spray such as hair spray, oil spray, and etc will use CFC to help the liquid inside the bottle spray comes out. When the liquid is out and turns into a smaller particles, the CFC gas will also released to the air and affecting the ozone layer.

19. Opening the refrigerator too long

Refrigerator also using CFC to help the machine keep the food cold for a long period of time. So when you open the refrigerator too long then the air that contains CFC from inside will go out to the open air. And this is surely will affecting the ozone layer.

Sea urchin is feeds on kelp and for sure most of them will be found in the kelp forest. The problem is that when the population of sea urchin is declining so significant, kelp will has the power to be freely grow in the sea water surface this will also creating a problem for the coral reef because the algae inside it will have not enough lighting to do photosynthesis. And this also become the causes of coral bleaching.

Those are some causes of coral bleaching that affected the coral reef’s life. Hopefully this article and another article from our website can help you to increase your awareness toward the ecosystem and the life surround you. And remember that temperatur changes and also pH changes become the biggest factor of the coral reef bleaching.