Home » Creatures » 15 Importance of Starfish In The Ocean

15 Importance of Starfish In The Ocean 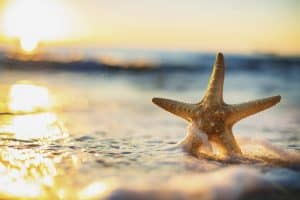 Starfish or also known as sea start is one of the ocean animal that is interesting to be known deeper.

We can actually find this animal easy since it’s exist in the shallow till the deepest part of the ocean.

This is possible because starfish has so many species which is about 1,5000 species.

The size and color of the starfish also differ from one species to another. Starfish also known through its arm it has 5 arms with high regeneration ability.

So, the arms can grow again once it is cut and another fun fact is that starfish has no brain and blood. In the shallow area of the ocean, starfish existence can be found easily in the seabed or simply sea bottom area. You may find it easy in the sea floor and look at it doing nothing.

But actually, this small and doing nothing looked like animal has such an importance of starfish in the ocean. So to let you to know more about starfish here are some of its importance in the ocean ecosystem.

1. Act as a predators

The first importance is the act of sea star or starfish as a predator. Without starfish the amount of their prey will go higher and make the ecosystem unbalance. This is not only applied for starfish but also applied for another types of ocean predators.

By having a role as a predator and a prey beneath the ocean this means that starfish actually hold a really important role just like any other living being.

Without starfish, ocean food chain may become unbalance and a certain species may endangered due to the low amount of prey or high amount of predators. There are lots of the importance of marine food chain that make us need to maintain the balance.

Another importance of starfish in the ocean  is that it feeds on almost everything in the ocean even though it is specified as a carnivore.

When it feeds on debris in the ocean somehow starfish is helping the nature to maintain the ecosystem by cleaning it up.

The accumulation of debris beneath the ocean may cause some changes in the ecosystem. Such as less space because of the debris accumulation and etc.

7. Preventing the kelp population to decrease

Continuing the previous point, basically sea urchin is feed on kelp. When there is less starfish means there will be more sea urchin and less kelp.

If this kind of condition keep happening means the population of kelp in the ocean may start to decrease because there is more sea urchin that need food.

8. Preventing the altering of the food chain

9. Indirectly maintain the oxygen supply in the ocean

Since starfish is feed on the sea urchin to prevent it consuming kelp too much until it is not exist again means starfish has an indirect role to the kelp.

By its existence starfish can maintain the amount of kelp population to stay in its number and to produce oxygen as it should as a plant. So by then the amount of oxygen will be maintained.

10. As a key animal to prevent the spread of disease

There are lots of starfish species that we can find in the shallow till deepest bottom part of the ocean. By this, eating the debris means that the starfish can prevent the disease coming from the bacteria that is living in the debris to spread out.

Since starfish is indirectly maintaining the population of kelp and sea grass from extinction due to the high amount of sea urchins, there is another impact of this.

If kelp or another marine plants are still exist and they can produce oxygen it means that the water temperature in the ocean will be still maintained. It won’t be too hot or too cold.

12. Keep one of the ocean habitat to stay exist

Even though starfish is known as a marine animal that lives in the ocean floor and can be found nearly in any depth of the ocean and look like it does nothing but it actually does something important.

One of the importance of starfish in the ocean that it can done by eating is that it keep the kelp population still exist. Kelp is not only has a role to act as a food but it also have a role for another animal for example as a habitat for another marine living beings.

Without starfish, another living beings may not able to have a place to stay since the kelp population will be decreased due to the increasing number of sea urchins.

13. As a key animal to eliminate abnormal fish

Starfish feeds on almost everything. It will also feeds on abnormal fish that is easily to get sick and remove them from the food chain and ecosystem.

Somehow their diet habit to eat the sick fish can help the ecosystem to get better since surely there will be more health fish exist in the ecosystem. By then each healthy fish can do their role in the ocean perfectly.

Since starfish feeds on almost everything in the ocean bottom including the dirt it can also help the coral reef from bleaching.

Starfish has no blood but it has a water vascular system. Through this system actually starfish has another role that is beneficial to the ocean ecosystem.

Because of the existence of the water vascular system, starfish is able to filter the ocean water. Ocean water filtering is surely important since it will maintain the ocean water to stay clear.

Clear water will help the living beings beneath the ocean to do any kind of activity that is involving water for example to breath.

So those are the importance of starfish in the ocean. I hope this information can be useful to you whether it is to help you to gain more knowledge or to let you to know more about what is happening in the deep ocean ecosystems.

Thank you for keep following our website. This means that you are actually aware and care towards the environment surround you.