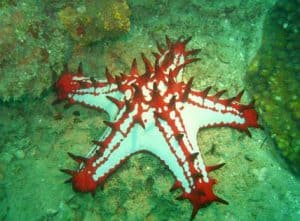 Sea Star also widely known as starfish and they belong to Phylum Echinoderm and still related to different types of Sea Urchin. Sea star scientific name is Asteroidea. Starfish only lives in ocean environment and unable to live in freshwater.

Sea star belongs to kingdom animalia and in class Asteroidea. There are more than 2000 species of sea stars and they lives in a various different place throughout the world’s marine, from inter tidal rock pools to the deep seafloors.

Typically, sea star only have 5 arms, but in New Zealand, sea star have been found with 11 arms.

On the other hand, Forcipulata typically have long and rounded arms for protection and food taking functions. Forcipulata sea star lives in shallow ocean water throughout the world and eat clams, oysters and mussels. Asterias rubens, vulgaris, A. Forbesi and A. Amurensis are some sea stars that belongs to Forcipulata group. Sometimes, this group preys on other echinoderms such as sand dollar.

Here the information about how many characteristics that Sea Star has as ocean animal, as follows:

Most sea stars lives in the benthic zone, meaning they are always at the lowest lever of a body of water. Organism who lives at the bottom of a of water called benthos. Other invertebrate ocean animal who lives in benthic zone besides sea star is crustaceans and polychaetes.

Echinoderm basically means an ocean invertebrate, include sea stars, sea cucumber, sand dollar and sea urchins with radial symmetry physical characteristics. This characteristic mean they have upper and bottom side, not right and left side.

Unlike fish, ocean invertebrate such as sea star are covered with spines and not scales. This spines covered with hard skinny skeleton with spike and thorns as their defense weapon against predators. Sea otters, rays, sharks, seagulls and some bigger fish are sea star predators.

Sea star can reproduce sexually and asexually. Starfish don’t have characters or both genders but they have the ability to change the gender whenever they like. Males sea stars will release millions of sperm and females sea star will release millions of eggs. When they finally met each other and they will form a fertilized egg and later on they can lives up to 35 years in healthy ocean ecosystems. You may want to read about Sawfish Facts

Sea star red spots located at the tip of sea star’s arms. This red spots also knows as eye spots. Even though sea star don’t have any visible body part that look like eyes, the red spots or the eye spots are functioning as their vision with light sensibilities. Sea star always has red spot in each of their arms. That being said, if they have 5 arms, they also have 5 eyes. If they have 40 arms, meaning that this captivating sea animals also have 40 eyes. Unfortunately, all those eyes cannot differs color.

Sea star larvae formed by millions of male sea star sperms and millions of female sea star females egg that has been released into the ocean. Later on, the sea star larvae moves with eating micro organism such as plankton and always take care of its own body. Adult sea star never takes care of its baby sea star hatches. They will gradually grow longer arms and bigger disk, until it is ready to mate again. Read more about  Types of Jellyfish in Indonesia

All animals has its own defenses systems that protect them against any kind of predator or that would help them in dangerous situations. Other than hard spike outer skin, sea stars has another defense system with chemical defenses. This chemical defense called Saponins. There are only two sea animal who has saponin which are sea cucumber and sea star.

Based on studies, the sea stars chemical defense has very unpleasant tasting, and in some cases it can caused vomiting, nausea and other unpleasant effect. You may want to read about Economic Uses of Ocean

Every animal has defense. Sea star has hard body plates as their armor, especially in tropical marine ecosystems, sea stars has bony body and spike spines. Tropical sea star such as Pentaster, the Valvataceans, Oreasteridae and Pentaceraster developed hard body plates compared to other in or to function in the wild and as defensive representation. Acanthaster planci has a very hard body and spike spines and chemical defense saponins attached on its body wall.

Since star fish are bloodless, there are three systems that helps its body to flow nutrients from the digestive tract. These three systems occurs in three places, which are the perivisceral coelom, the water vascular system and the hemal system

Sea star move using their arms, which also called a tube feet as the part of water vascular system. Tube feet for each echinoderm is different, if sea star using their arms, sea urchin moves with their undersides, as well as sand dollars and sea cucumbers. Nonetheless, it has the same functions as organs of locomotion with small and flexible hundreds of appendages. Sea star tube feet can cling or attached in steep surfaces, such as aquarium wall and creep in any direction.

Sea star is quite unusual and very peculiar compared to any other marine animals that we usually see. Even they only look like cute symmetrical star, they can see, touch and smell like any other animal. Their sense of smell is actually really amazing. It is called the chemo-receptors, it is so sensitive and able to detect faintest smell of preys and the direction they’re coming from. You may want to read about Types of Ocean Parasites

Since, star fish is an echinoderms marine animals, they have no brains and have no bloods. However, they can regenerate their missing body parts. Let’s say they only have two left arms after being attacked by the predators, the remaining arms will develop missing arms until it has completed and totally recovered like the previous one.

As long as the central disk unharmed, there’s always a chance they could survive and grow new arms while other survived arms still has access to food functions. The process takes quite a lot of time and probably around one year depend on how many arms that is lost.

Typically sea star has 5 symmetrical arms, but in particular place all over the world such in New Zealand, there are sea star with more than 5 arms. There are 10 arms sea stars, 20 arms sea stars and even 40 arms sea stars. Their length and weigh also differs, depends on their size and their arms but usually the are weigh up to 5 kg and 25 to 65 cm in length.

Starfish lives by eating clams, shells and mussels. The size of sea stars mouth is very small, sometimes when they need to eat larger prey that cannot be eaten by their small mouth, their stomach will pushed outside their meal while they are eating. Sometimes, sea star even eat many bristled worms and even eat other echinoderms such as sand dollar as well.

This characteristic on sea stars are very unique, why? Because Sea stars mouth located on the inside part of its central disk body, or you may say the underside, while their anus located on the upper side that everyone can easily see. You may want to read about Characteristics of Sea Turtles.

Those are complete explanation about how many characteristics of sea star that you must know, to enrich your knowledge about animals in the ocean life.