Home » Ocean Facts » Why the Water on Earth Never Runs Out? Here’s the Explanation

Why the Water on Earth Never Runs Out? Here’s the Explanation 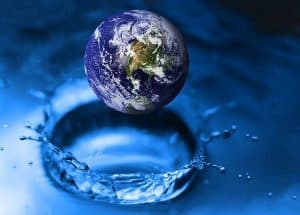 Perhaps you once had thought and asked “Why the water on earth never runs out? Where is the source of this water? Can the water be reduced?” These questions truly are good questions that related to water. Water is a life source that highly important for human life, and also for other living organisms such as plants and animals.

As you can see, this morning perhaps you already took a glass of water, or before going to your workplace, you made a cup of coffee with water. Without a sufficient supply of water, as a human being, we will face some distresses in our daily activities. Therefore, there are many utilizations of water resource in human life. Our body itself needs the water so much to live the daily activities, also water is used for other activities such as bath, washing the body, and also for farming.

In this article, we will discuss the origin of water and why the water on earth never runs out? Here’s the explanation based on science.

Where Does the Water on Earth Come From?

The first question that perhaps can be answered is the origin of the water. Our Earth stores lots of water on the inside. Maybe you wouldn’t believe, that beneath Earth’s surface that we stand on, there are lots of water that always ready for our uses. Besides that, water on the Earth also comes from the atmospheric layer, volcanoes, seas and oceans, rivers, and lakes.

More than millions of years, this water is continuing to undergo the recycling process through several media which we already stated in the above statement. This process is the reason that water on Earth can be used by us.

So, it can be concluded that the sources of water are:

Why the Water on Earth Never Runs Out?

Earth is a planet that so interesting to learn. This planet that inhabited by human has several advantages and also other unique characteristics compared to other uninhabited planets, one of the characteristics is water availability. Although, current findings suggest that there is a high possibility that Mars contains water. However, Mars experiences high radiation exposure that’s very harmful to human, while the Earth doesn’t.

In this case of water supply, Earth has a significant feature in storing the water supply. According to a volcanologist, Jim Weber, Earth is so efficient in storing a massive amount of water. Water undergoes evaporation through the atmosphere, but there is a slight possibility that this can go beyond the atmosphere. This because of the temperature in a certain height of the atmosphere is very cold which cause the water vapors to turn into crystals.

Because of the gravitational force, then these crystals drop back to the Earth. Well, the water that drops back to Earth takes the form of rain will be absorbed back into the Earth, then it will be stored again by the Earth. The ability to change from is the one of properties of water.

This phenomenon is a cycle that can be called the hydrological cycle, where this cycle runs all the time without ever stopping, even while you’re reading this article. That’s one of the causes why the water on Earth never runs out.

Thing to Consider About Water

Not every region on this Earth has good water absorption or good water cycle. There are several places that experience rare rainfall which leads to drought and causing the places lack of clean water. Some phenomenons such as wind and river flow also become key factors that determine water supply. Aside from that, water pollution also causes a lack of clean water. So, although the water on Earth always has the exact amount in some places there is a chance of lack of water supply, especially clean water.

More than one million of the world population live without enough clean water supply, they lack clean water supply. Besides that, climate change also affects the scarcity of clean water in this world, in general, weather and climate have some effects on life. Some clean water sources start to decrease in some areas in countries that previously possess clean water.

Water supply on this Earth will never run out because of the naturally-occurred cycle. This cycle is known as the hydrological cycle, wherein its process, water will be always returning to Earth, stored, distributed, and also can be used by humans. So. this cycle is the cause of why water on Earth never runs out.

Preserving water absorption also become our task as humans, because if we don’t preserve it well, this hydrological process and its components won’t perform as it should be and this can lead to some disastrous events such as flood and landslide.