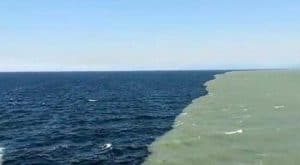 Popular name of Indonesia as the biggest islands country is not a lie. At least there are more than 17.504 islands spread from Sabang to Merauke. So no wonder if Indonesia is well known as maritime country and for sure it has very broad sea territory. The water territory especially seas in Indonesia totally is 3.25 millions km square. so we can say that Indonesia seas are larger than the lands which is only 2.01 millions km square.

The biological varieties of Indonesia especially in the seas are uncountable. Some of them even cannot be found in another country which means those can be found in Indonesia only. Beside that, the under sea beauty is no doubt. Many kinds of fish from the small size to the big size and various coral extend its beauty which belongs to Indonesia only.

The Split Sea in Suramadu

Perhaps, Suramadu  is not a strange name for most of us. For the who do not know Suramadu, Suramadu is the name of a bridge that connects Java Island in Surabaya to Madura Island exactly in Bangkalan. This bridge across Madura Strait and becomes one of the longest bridge in Indonesia.

In 19 of March 2019 a viral video spread to public. The video which was recorded from Suramadu Bridge showed that the sea under the bridge looked like split. Some people said that the phenomenon normally happened only in the coast or around the bridge pillars in Bangkalan side and happened in a short time. However, that time was different and happened through the sea below the bridge. This unique phenomenon showed the water color was different between black and almost muddy, while the other side was not. So that it looked like split.

The Cause of Split Sea

According to Alan Koropitan, an Oceanography Expert from IPB and the member of Indonesian Young Scientist (ILMI) said that the phenomenon happened in Suramadu was known as plume. Plume itself normally happens when rainfall is quite a lot and the water discharge is increasing. Alan said that the phenomenon is because of the the water plume had different density and might be because of high rainfall volume so that the water discharge increased and brought the river sediment plume to the sea. According to him, the plume is like a pattern that is formed on the water surface so that the color looks like contrast.

The phenomenon of split sea is also explained by Nugroho Dwi Hananto, an earthquake and marine researcher from Indonesian Research Institution (LIPI). He said that that the phenomenon is interesting. According to Nugroho, that phenomenon is because of 2 water densities were unmixed. Water that contains high salinity is sometimes difficult to mix perfectly. Beside that, Nugroho also explained that the phenomenon can happen because sea water and tasteless water meet but not perfectly mixed. According to him, this phenomenon normally happen during transition from rainy season to dry season.

The Effect of split Sea Phenomenon

The effect of the nature phenomenon made Surabaya Madura Development Institute or BPWS explained that the phenomenon was known as Halocline. And based on the video spread to people, the halocline had 60 km length. According to Faisal Yasir Arifin, the Public Relation of BPWS, said that the phenomenon had frequently happened but this time Halocline quite long and it even reached Sampang. Faisal explained that the Halocline effected the color difference or color gradation due to water density either in the west or the east up to 60 km.

Faisal also explained that color difference or gradation is the impact of different salinity of the water, density difference, constraint, water turbidity so that gradation was formed on 2 different water flows below Suramadu bridge. It happened not only to Suramadu, but also to Sunda Strait and Gibraltar Strait.

Nothing to worry from this phenomenon. The color gradation on the sea which is known as Halocline did not affect anything. And there is no correlation with atmosphere of the weather. This is just because the water density which created color gradation.

Unique Facts of Halocline in Suramadu

The sea phenomenon which looked like split sea attracted a lot of people to come and perpetuated that moment when crossing by Suramadu bridge. From the bridge, the color difference from 2 different water densities could be seen clearly. However, it is not all people may see this unique natural phenomenon.

The fishermen who passing by that area could not see the water difference clearly. Even though that phenomenon happens everyday, but some fishermen who pass by that halocline said that they can find a lot of froth along side the bridge the same as the one in the video.

According to Ady Hermanto, a forecaster from Maritime Meteorology Station of Perak Surabaya, the halocline phenomenon can’t be seen by everyone around Suramadu bridge. Because halocline can be seen from certain height only. While if we approach the sea with different color, it will look like faded. This is because of overview parallax which is too far so that it must be seen from certain height. While the fishermen can’t see it.

People who cross on Suramadu bridge for sure may see halocline clearly. The height of Suramadu bridge is 35 meters from the sea surface. The froth which was seen by the fishermen who passed by that area was the result of tasteless water and sea water that meet each other. This is it which create long and straight froth.

That’s all the scientific explanation of split sea phenomenon in Suramadu. Hopefully this article will be useful for you.

Characteristic and Facts Of The Red Sea