Home » Creatures » 13 Uses of Sponges in the Ocean

13 Uses of Sponges in the Ocean 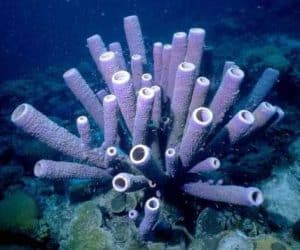 A sea sponge has a unique feature that makes it different than the rest of the marine creatures. It has a porous body, thus the name which is sponge.

Sea sponges have no nerves, circulatory or digestive system. They solely rely on the moving water that moves past their bodies. But are these sponges useful? They are indeed useful to the ocean ecosystem as well as to humans. Find out the 13 Uses of Sponges in the Ocean which you can read below.

2. Tells the Health of Water

A sea sponge can regulate harmful component. It has the ability to collect bacterias into its body. The bacterias can absorb ammonium in the ocean water. They also convert the harmful ammonium into nitrogen gas. So the sea sponge helps to minimise the nitrogen level for coral reefs and the whole ocean ecosystem.

Other than monitoring the pH level in the ocean, a sea sponge is useful in studying ocean periods. In this case, the skeleton is crucial too. Scientists may study the skeleton, looking for chemical residue during the changing ocean periods. There must be some chemical changes when the ocean turns warm from cold or vice versa. Also, this can help in studying the climate in our world too.

This next use for the ocean sponge is for understanding the ocean cycles. Through its skeleton, researchers are able to study the pattern in ocean cycles. This is important because it can help in studies that are related to the ocean environment or the whole ecosystem.

An ocean sponge can filter ocean water. The main function of its body is to absorb the ocean water surrounding it. During the absorption, it takes every sea component into its body. It releases the water back into the ocean once it finishes the filtering process.

Another use for ocean sponge is providing shelter. In the ocean ecosystem, a sea sponge can provide home or temporary shelter to the marine animals. This is especially important to those creatures that live among the coral reefs environment. Furthermore, the marine creatures that take shelter in the sea sponge are shrimps, crabs or algae.

You can actually use an already dried ocean sponge for arts and crafts. You can use them to paint on a canvas. Furthermore, the texture will create interesting patterns for your painting.

An ocean sponge is very popular for bathing tools or cosmetics. People use it for bathing or exfoliating. The sponge has the perfect texture and components to carry out all those uses.

So, there are a lot of uses to the sea sponges. They help in maintaining the nutrient in the ocean and helps feed other marine lives. But most importantly, they played a part in creating complex forms in the ocean. Without these sea sponges, we may never have the ocean and all the marine creatures that we have today.