17 Characteristics of an Ocean Ridge

What are  17 characteristics of an ocean ridge? Before we talk about it, we may also know, what ocean ridge is. Ocean Ridge is the largest features in ocean basins, ocean basins contain the overwhelming majority of all water on the planet and have an average depth of almost about 2.5 miles. A number of major features of the basins depart from this average-for example, the mountainous ocean ridges, deep-sea trenches, and jagged, linear fracture zones. Ocean ridges are any of various underwater mountain ranges forming a chain that extends almost continuously for about 66,000 kilometers.

How are Ridges in Ocean Formed? 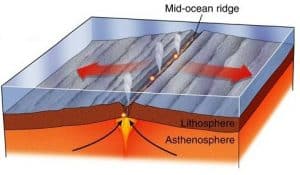 Mid-oceanic ridge is a long mountain range on the ocean floor, extending almost continuously through the North and South Atlantic Oceans, the Indian Ocean, and the South Pacific Ocean. A deep rift valley is located at its center, from which magma flows and forms new oceanic crust.

As the magma cools and hardens it becomes part of the mountain range. Mid-oceanic ridges form when tectonic plates meet beneath the ocean and ridge-push, slab-pull or do both to create a subduction zone.

Characteristics of an Ocean Ridge


They are two types of a ridge, they are fast-spreading ridge and slow-spreading ridge. Fast – Spreading ridge, it’s located in the Northern and Southern East Pacific Rise. It has smoother topography at the ridge crest and looks more like domes. They have relief of only a few hundred meters down the sides of the ridge to the crest. They have valleys in it, but usually, they’re much smaller, it less than 100 m wide and only 10-20 meters deep.

In here, is hotter, meaning that more magma is present beneath the ridge axis and that more volcanic eruptions occur.Because the plate under the ridge crest is hotter, it responds to the divergent spreading process more fluidly and that behaves like hot taffy being pulled apart.

Slow-Spreading ridge, it’s located on the Mid Atlantic ridge generally have large wide rift valleys sometimes as big as 10-20 km wide and very rugged terrain at the ridge crest that can have relief of up to a thousand meters (3,128 feet). At the slower-spreading ridge, the seafloor behaves more like a cold, when it pulled, it cracks and breaks to form ridges and valleys.

Ocean water is constantly filtered through cracks at the mid-ocean ridge. The cold ocean water goes down and meets the hot new crust below the surface. There’re many types of metals such as sulfur, copper, zinc, gold and iron are transferred into the water.

Deep ocean water, is the most active areas where tectonic plates meet in the Atlantic and the Pacific Oceans are seething with volcanic activity.

Types of The Mid-Ocean Ridge of Oceans

Below, there are some types of Ocean ridge, as follows:

Refer to the information above that  Pacific ocean is the fast-spreading ridge. How fast is the mid-ocean ridge spreading? Well, when lava gets erupted at the mid-ocean ridge axis it cools and turns into hard rock. As it cools it becomes permanently magnetized in the direction of the Earth’s magnetic field.

As the second largest ocean, an Atlantic ocean. It occupies the central part of flat abyssal plains that continue to the margins of the continental coasts. The Mid – Atlantic Ridge is in effect an immensely long mountain chain extending for about 10.000 miles in a curving path from the Arctic ocean to near the south of Africa. The ridge is equidistant between the continents on either side of it. The mountains forming the ridge reach a width of 1,000 miles.

The Indian Ocean is the third largest ocean, it extending from Asia to Antartica and from Africa to Australia. Indian ocean is a very slow oceanic ridge, while the spreading is very slow but it spreads at intermediate rates.The floor of the Indian Ocean has an average depth of 3,400 meters. The ridge rises to an average height of 10,000 ft and a few peaks emerge as islands. The mid-oceanic ridge along with other submarine ridges encloses a series of deep-sea basins. Rifted crest and rugged mountainous flanks are characteristics of the Southwest Indian Ridge. The mid-Indian Ridge has fewer features of this kind, and the Southeast Indian Ridge has generally smoother topography.

The floor of the Arctic ocean is one of the last frontiers on Earth,  its too much ice, and too difficult. But, on a research expedition, the U.S. Coast Guard Cutter which a specially designed icebreaker equipped for science. The Arctic expedition, funded by the National Science Foundation, focused on the northern end of the mid-ocean ridge.

The Gakkai ridge is the deepest and most remote portion of the global mid-ocean ridge system. It extends 1,100 miles from north of Greenland to Siberia, lying about three miles beneath the Arctic ice cap.The Gakkel Ridge is the slowest spreading ridge in the world, spreading at a rate of one centimeter in a year. Because it’s so slow-spreading, scientist expected there would be very little volcanic activity along the Gakkel Ridge.See Also : 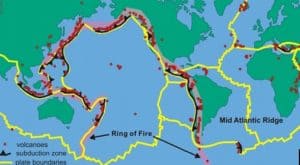 The Mid-ocean Ridge Volcanoes form where two plates are moving apart, as the plate move apart, cracks form in the crust. Magma from the mantle surges up these cracks and erupts onto the surface forming new crust.

They have produced huge volumes of lava. This lava is very fluid, it pours onto surface and flows or forms lakes. The example of Mid-ocean Ridge Volcanoes is the destroyed of Vesuvius and Pompeii. The 79 CE eruption of Vesuvius destroyed the nearby town of Pompeii.

Excavations of the buried Roman city show just how dangerous volcanoes can be. The day after the eruption began, violent pyroclastic flows ripped through Pompeii, destroying the parts of the city which hadn’t yet been buried and killing anyone left behind.Unfortunately, these flows traveled beyond Pompeii, catching up with many who had evacuated. The destruction of Pompeii has inspired artists for centuries.

Another example is in Hawaii, which is actually the chain of island volcanoes, created as the Pacific plate moved over the mantle plume. The Big Island of Hawaii is made up of several volcanoes. The largest, Mauna Loa, is bigger than Mount Everest – but the most of it is under water. Kilauea on the Big Island is possibly the most active volcano in the world. Hawaiian eruptions are spectacular, but because they are not as dangerous as explosive volcanoes, they are a major tourist attraction.

Ocean Ridge is the largest features in ocean basins, ocean basins contain the overwhelming majority of all water on the planet and have an average depth of almost about 2.5 miles. It forms because ridges and trenches are caused by continental drift, the earth is covered by a series of tectonic plates that float on a mantle of molten rock.

Besides, Mid-oceanic ridge is a long mountain range on the ocean floor, extending almost continuously through the North and South Atlantic Oceans, the Indian Ocean, and the South Pacific Ocean. A deep rift valley is located at its center, from which magma flows and forms new oceanic crust. There are three main of characteristics of an ocean ridge; ridge types, fracture zones, water, and minerals. Therefore there are other characteristics based on the four major of the ocean; Pacific, Atlantik, Indian and Arctic Oceans.

Next, they have characteristics on the four major of the oceans which are a different one to another ocean, like Pacific ocean, it has the fast-spreading ridge and it has the best fracture zones are located in the Eastern Pacific. Other ocean like Arctic ocean, it deepest and most remote portion of the global mid-ocean ridge system and it extends 1,100 miles from north of Greenland to Siberia. Above the information, we also tell about the example of mid-ocean ridge and mid-oceanic volcanoes examples. Hopefully, all the information about these characteristics may help you and give knowledge to us.

17 Types of Jellyfish in the Great Barrier Reef

17 Endangered Whale Species in the World