Corals are organisms that are made up of many animals called polyps. Corals can be found anywhere within the ocean environment. They grow near rocky areas of the sea, the shallow areas of the beach or deep inside the ocean water. Corals come in many forms, shapes, colours and sizes. There are currently around 2.500 species of corals out there. Here, we will talk about the 15 Different Species of Coral. It is fun to know more about these species which grow in different parts of the world’s oceans. 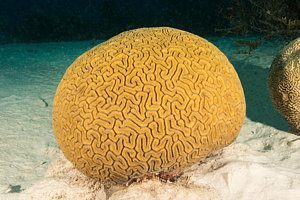 The Grooved Brain coral is named as such because of its appearance. The coral looks like a human brain.

Moreover, the coral has grooves that form lines similar to the folds of the human brain, almost making it look like a labyrinth.

The colour of this coral is grey. Its size is around 2 meters. The inside part of the coral is actually made up of calcium carbonate skeleton while the outer part consists of tissues. Also, the coral is often found in reef areas or deeper parts of water. The coral eats tiny zooplanktons which are rich in nutrients.

On the other hand, the Ivory Bush coral that lives deep in water is unable to do the same thing. So, it produces energy by eating the planktons carried by the water currents. This coral is important to a lot of marine species. It provides shelter and a suitable habitat for them.

This particular species of coral is also known as Round Starlet coral due to its round shape. Its colour is dominantly red with a bit of brown hues. Massive Starlet coral is able to grow up to 2 meters.

The Massive Starlet coral is more common in shallow water than deep water. The Atlantic Ocean and the Caribbean Sea are places where the massive Starlet coral thrives. Other than that, this coral grows best near rocks. This species is known to grow within a very slow speed.

The Clubbed Finger coral also goes by the name of Cat’s Paw coral. It is a coral species with varying locations. It can be found in the eastern parts of Africa, Madagascar up to the Red Sea. The coral is known to have a speedy rate of growing.

Additionally, it is also very quick in adapting to any sudden changes in the environment. The coral comes in many different colours including green, blue, pink and cream. The branches of the coral are quite thick and flat. As for the tips of the branches, they are round but blunt.

Mustard Hill coral, which is also known as the yellow porites, lives in the waters of western Africa, Atlantic Ocean and Caribbean Sea.

It is one of the species that fall under the category of stony corals.The corals have different colours including yellow, grey or brown.

The surface of the coral seems as if it is porous. This coral lives best in areas where there is nothing to block the light of the sun to reach it. It needs a moderate amount of light to produce energy. 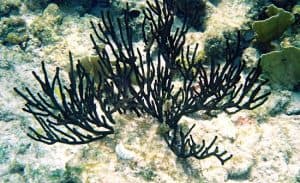 The Black coral is best found in tropical waters. Specifically, it grows in deep parts of water where it is extremely dark or murky. Thus, due to the condition it lives in, the colour of this coral is black or deep shades of brown.

There are also small thorns covering its surface. That’s how it earned its nickname which is Little Thorn coral. This coral has similar appearance to trees. Each Black coral has numerous different size and shape. 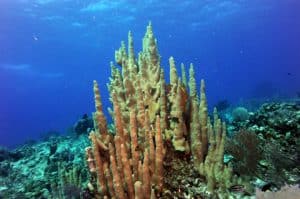 The Pillar coral is huge and can reach up to 3 metres. It is common in the Caribbean Sea as well as the Atlantic Ocean.

This coral looks like a group of tall, thick pillars growing towards the surface of the water. It grows straight from the surface it lies on without growing any additional branches.

The colour of the Pillar coral is either brown or beige. This species used to grow in other parts of the world such as the reefs in Florida. However, it no longer grows there because its population suffered from excessive harvesting. 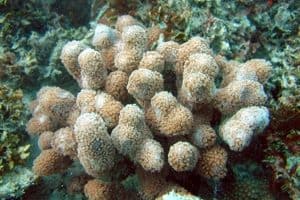 The Hump coral is common in the waters of West Africa, Atlantic Ocean and the Caribbean Sea. It looks like a group of fingers with big tips.

The colour of the Hump coral is usually white or grey with a hint of pale blue. It can grow up to 8 metres.

This coral grows close to each other but sometimes there are spaces between each coral. This species grow at a very slow speed. It is said to be one of the oldest creatures on Earth. 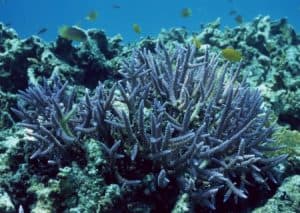 The Blue coral is common in the Indian Ocean, Pacific Ocean and the Great Barrier Reef. It lives in areas with deep water as well as reefs that receive a lot of waves.

This coral species has a huge skeleton on the inside with living tissues surrounding its outside. The colour of this coral is blue or grey.

The Blue coral is one of the most favourite corals used in aquariums. Reportedly, the population of this coral is decreasing due to the poor environment. 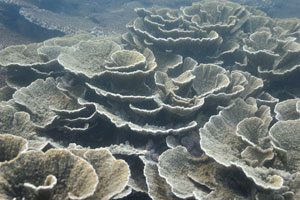 The Lettuce Coral can be found in western parts of the Atlantic Ocean as well as the Caribbean Sea. It is also very common in the waters of Brazil.

It prefers areas with shallow depth. The growth of this coral is affected by the movement of the water. The size of the Lettuce coral is quite small.

Other than that, it has a very short lifespan. However, there are always many young Lettuce corals. After all, this species is one of the most common species of corals in the world. 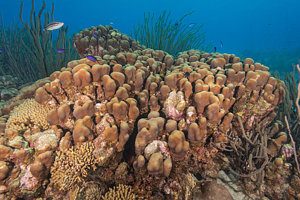 The Boulder Star coral is a native species of the Caribbean sea. It grows best where the depth of the water is deep.

Moreover, it can grow to a huge size which is around 1.5 meters.The Boulder Star coral is famous for its size since it is bigger than other species of corals.

The coral grows upward like boulders with a dome-like tip. The colour of this coral is brown. However, it is often found to be grey with a hint of green shade. The Boulder Star coral grows at a slow rate and it is very vulnerable to diseases. 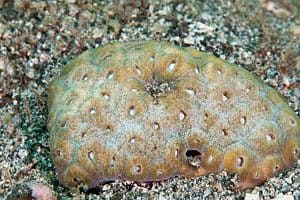 Just like the Boulder Star coral, the Great Star coral is also a native species of coral in Caribbean sea. It thrives in areas with a lot of reefs.

The colour of this coral is bright red that might vary into orange. The coral is made up of polyps that look like huge fingers.

The polyps of this coral will extend when night time falls. A group of the Great Star corals may form a dome like shape when each species cluster together. 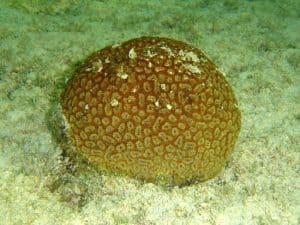 The Elliptical Star coral is a special species of coral. What makes this coral special is the fact that it has been around for approximately 55 million years.

The coral is also known with its alternative name which is Pineapple Coral. It can be found in Florida, Bahamas, the Gulf of Mexico and the Caribbean.

However, it is declining in population within those areas as it is very vulnerable to diseases. It is currently protected in the reefs of the Dutch Caribbean where the coral grows in healthy numbers. The colour of this coral is cream or orange with brown hues. 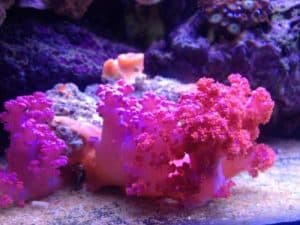 The Flower Tree coral also goes by the name of Strawberry coral or Orange Cauliflower coral. The colour of this coral is reflected through its name which is varying shades of red and orange.

The size of this species is quite small when it is closed. When it is open, it may seem bigger as it expands. The Flower Tree coral feeds on planktons.

It prefers to live in dark parts of the water since it does not carry out much activities that help in the process of photosynthesis. 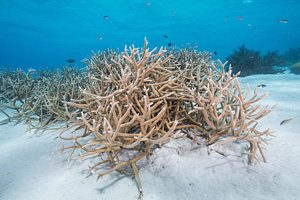 The Staghorn coral lives best in waters with great depths. It can be found in the Great Barrier Reef, the Florida Keys, the Caribbean Sea, the Bahamas and the Gulf of Mexico.

This coral is very known for its speed of growth. It can also grow to a very big size, around 2 meters. The branches of this coral is roundly shaped.

The Staghorn coral is important to the growth of the Great Barrier Reef as it provides a suitable habitat for the fish.

These 15 Different Species of Coral in the oceans do have interesting shapes and unique characteristics. Furthermore, they are important to marine life as they provide food and shelter to them. The next time you visit the beach or the ocean, you might be able to spot one of these corals.