The Great Barrier Reef is located in the northeastern part of Australia. It is rich of various marine species. Currently, there are hundreds of starfish species in the habitat.

Starfish is a marine echinoderm with a central body and many arms. They are known for their outstanding ability to lose their arms and regenerate new ones. 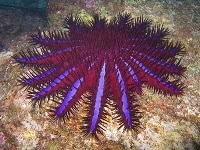 The Crown-of-thorns starfish is infamous for its deadly venom. The venom is released from its spines that look like thorns covering all over its body surface.

Other than that, this starfish is one of the largest species of starfish in the ocean. Its size can reach 35 cm.

Although the body of this starfish looks stiff, it is actually flexible. Additionally, the Crown-of-thorns starfish has multiple amount arms. Besides that, there actually hundred of sharp thorns covering most of its body surface. The colour of this starfish is usually very light brown but it can also be found in other striking colours. 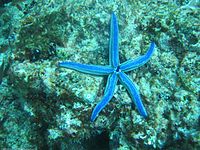 The Blue starfish is a common starfish found in the Great Barrier Reef. It has a tremendous ability to regenerate its own body.

Moreover, the colour of this species varies from purple to blue or bright blue. Its feet are short and pale yellow. The Blue starfish moves very slowly.

This species is also often dried and sold for ornaments or decoration purposes. Aquarium enthusiasts love to collect this species as an addition organisms for their aquariums. 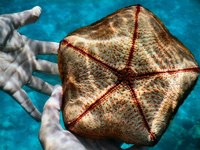 The Cushion star can be found in the southern part of the Great Barrier Reef, Heron Island. Its appearance is similar to its name.

The starfish looks like an inflated cushion or pillow. The colour of the Cushion starfish could be orange, red, green or brown.

This species is fond of absorbing nutrients from the corals surrounding it. Moreover, it also likes to eat meat from clams. 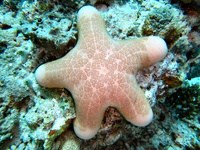 The Granulated starfish can grow up to a large size. It has five short arms that resemble cones. Other than that fact, the arms are also very thick.

Read: Animals in the Coral Reef

The colour of the Granulated starfish is light pink with its center in brown. This starfish thrives living in reefs with shallow waters at maximum depth of 40 meters. Its diet consists of detritus, algae or particles from dead marine animals. 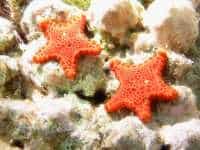 The Biscuit starfish can be found among the northern area of the Great Barrier Reef. Specifically, in the Lizard Island. 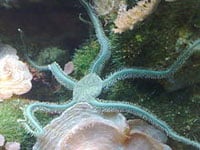 The Brittle star lives in the One Tree Island, the southern part of the Great Barrier Reef. This starfish has bioluminescent quality which means that it can emit light from its body.

The arms of this starfish are long and able to grow up to 60 centimetres. Other than that, they are also thin.

These arms help to quickly move around places but the Brittle star prefers to hang on corals. A Brittle starfish is most likely to eat detritus. It also consumes plankton and organisms that are decaying. Also, it is able to kill other small animals for food. 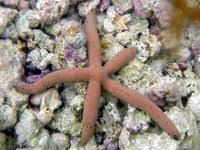 The Linckia starfish has many nicknames. It is also often called as Spotted Linckia, Dalmatian Linckia or Multicolor Starfish.

There is a reason for those names, this species come in a wide variation of colours. It can either be found in grey, brown or pink.

The surface of the Linckia is rough. Moreover, it has 5 arms and it is known to exhibit frequent removal of its own arms. 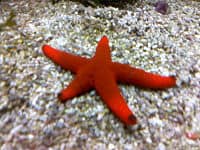 The Red starfish is basically a starfish species in striking red. The body surface of this starfish is covered with tiny black dots.

The black dot is also present on each tip of its arms. The Red starfish is a sensitive species since it cannot tolerate sudden changes in the pH of the sea water. This species is known to be peaceful and mainly feed on algae. 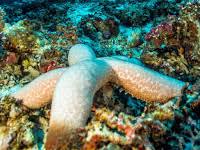 The Brown Tipped starfish has an interesting appearance. It is white in colour with a slight hint of pink.

However, every tip of its arm is brown. The starfish is also quite thick and large. The arms actually look like sausages.

That’s why it is also often called Heavy starfish or Fat Sea starfish. This starfish mainly eats other species of invertebrates in the water. 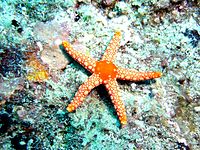 Another starfish with an interesting look is the Necklace starfish or otherwise known as the Marble Starfish. This species of starfish has five arms with red tips on each.

The center of its body is one huge red circle. But, the remaining parts of the body look like they are covered in small, white cobblestones. This starfish likes to eat sponges or small species of invertebrates. 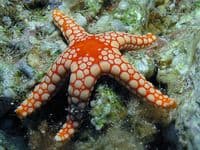 The Firebrick starfish is a head turning species. The patterns and the colours will immediately catch anyone’s attention.

Its body is covered in small circles of fiery orange and bright purple. There are big, swollen circles on each tip of its arms.

Its arms are also very blunt and round. The Firebrick starfish can grow to a huge size. This species of starfish likes to live in deep parts of the water. 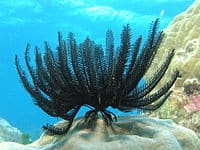 The Feather starfish is a common beauty in the Great Barrier Reef. It looks just like graceful feathers moving underwater.

This species may grow the average amount of 5 arms. But, it also has the ability to grow over 200 arms if it lives in good health and condition. The arms are sticky so they can catch small food particles that are passing through in the water. 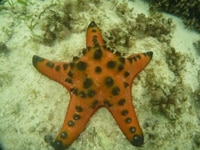 The Rhinoceros starfish is named as such because its body is covered with tiny bumps. These bumps are pointy spikes that resemble the horn of a rhinoceros.

The pointy spikes may look like chocolate chip to some people, that’s why it is nicknamed as Chocolate Chip starfish. The body of this species is designed as such so it can frighten any dangerous predators. 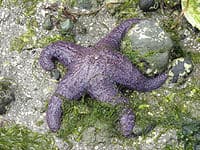 The Giant starfish may come in red, purple, pale yellow, grey or even brown. There are very small dots that are usually blue all over its body.

The arms of this starfish can be quite wide. This species feed on mollusks. Besides that, the Giant starfish likes to live around rocky areas with tides that are low. 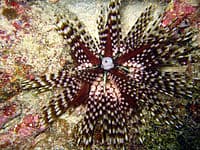 The Eleven Armed starfish is often mistaken by people as the Crown-of-thorns starfish. The colour could be brown, red or orange.

It prefers to live around areas with plenty of rocks. The average species of this starfish do have 11 arms.

However, some species can be found with less than that amount of arms due to many reasons including losing an arm to scare predators away. This starfish likes to feed on small sea urchins, molluscs and even other species of starfish. 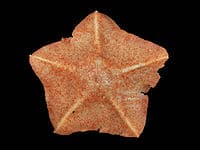 Some species of this starfish may have fully developed arms which are separated from one another. But, some species have less developed arms and tend to merge which make cause their shape to be more hexagonal or pentagonal. 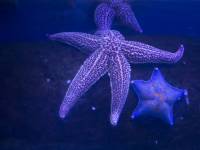 The Northern Pacific starfish that is in the Great Barrier Reef poses a threat to other native species in the habitat. This species is an invasive species just like the Crown-of-thorns starfish.

The body of this starfish is very pale yellow with dots of purple. Every tip of its arm is covered in purple too.

Starfish may be pretty to look at but don’t let their appearances fool you. Some are dangerous to other marine species and humans. Such starfish are the invasive species like the Crown-of-thorns and Northern Pacific. However, a large percentage of the starfish species is not harmful. They only attack when there are predators coming after them. Other than that, these species are just keeping up the balance of the marine ecosystem.

17 Types of Seaweed in the Great Barrier Reef