In this century, marine energy has become a hot discussion topic in this planet. Why it becomes a hot topic for us? Because marine energy is a new alternative energy to support world’s electricity needed. Other fact that supports marine energy as our main topic is that marine energy relates with global warming. Does it give a bad or good effect? It is the positive one, exactly.

Due to this condition, marine energy gives us the solution. This energy uses ocean movements to run the energy device, and then resulting on more electricity source for our daily activities. Marine energy also leaves no greenhouse effect, so that our environment will be safe.

Marine energy or well-known also as ocean energy, is one kind of renewable energy source. This energy is resulting from the extraction of ocean energy such as tides, waves, ocean thermal energy, to generate electricity. The vast power of ocean movement makes it worth to be one of energy source for our electricity needs. 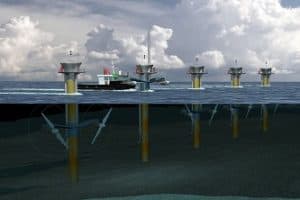 The low and high or can also called as the rising and falling condition of the tides is influenced by the gravitational forces of the sun and the moon.

Thus, the use of ocean tides and the gravitational effect of the sun and the moon, tidal energy is labelled as renewable energy source as well as alternative energy source.

Indeed, the effect of the center of solar system and the natural satellite; the sun and the moon, causes the large amount of water movement around the world’s oceans.

As we know, our earth, the sun and the moon rotate around each other in its space. Regarding with the rotation movement, the gravitational forces influenced the water on earth. Then, it causes the large amount of ocean water builds periodic shifts on water over the world. The vertical shift on ocean water is later called as tides.

High tides happen when the earth and the moon lines up with each other. Consequently, the gravitational forces from our earth and our natural satellite becomes very strong. This strong forces then cause a large amount of ocean water to move towards the shore. Similarly, low tides happen when the earth and the moon gravity are at 90 degrees to each other. The result of these gravitational forces is a weaker influence. This weak influence makes the ocean water flows away from the shore as the mass of water moves to another location on our planet.

In processing our electricity source, tidal energy uses two working systems; named tidal barrages and tidal stream. Tidal barrages are built to capture the tides. When the tides flood into the basin, turbines in the barrier sets up electricity. The absorbed water will be released from the turbines, and the electricity will generate again when the tides outside the tidal barrages decreased. The other system, tidal stream, extracts energy from the kinetic movement of ocean water. The kinetic movements we are talking here is the ebbs and floods of tides. When this device got the kinetic energy, it produces the electricity. 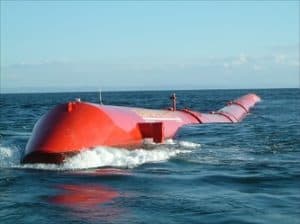 The kinetic energy inside the surface ocean waves is then captured by wave energy technologies to do useful works.

Its also including the generation of electricity, water desalinization, and pumping water into basin.

When wind blows across the sea surface, it transfers the energy to the waves.  Wave speed, wave height, wave length, and wave density become the measurement of the energy output.

The wave energy is extracted through a device named Wave Energy Converter (WEC). This converter is an enclosed chamber with an opening under the sea. The converter allows strong sea waves to flow into the chamber and back outside the chamber .

Meanwhile, the water level in the chamber rises and falls with the rhythm of the wave. The air forced forwards and backward via the turbines joined to an upper opening in the chamber. Afterwards, the compressed and decompressed air has enough power to propel the turbines.

The turbine is propelled in the same direction by the back and forth airflow through the turbine. The propelling turbine turns a shaft connected to a generator and then produces electricity. After that, the electricity is transported to electrical grids and later supplied to demand centers and distribution lines that connect individual homes and industries. 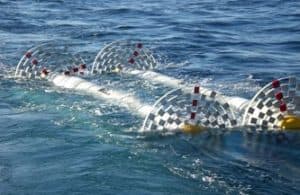 Most ocean currents are driven by wind and solar heating of surface waters near the equator, while some currents result from density and salinity variations of the water column.

Ocean currents are relatively constant and flow in one direction, in contrast to tidal currents along the shore.

While ocean currents move slowly relative to typical wind speeds, they carry a great deal of energy because of the density of water. Water is more than 800 times denser than air. So for the same surface area, water moving 12 miles per hour exerts the same amount of force as a constant 110 mph wind. Because of this reason, ocean currents contain an enormous amount of energy that can be used as the source of electricity.

This kind of energy is now well-known as ocean current energy, which extracts the kinetic energy of marine currents. An example of this kind of energy is The Gulf Stream, which is a powerful, warm, and swift Atlantic ocean current that originates in the Gulf of Mexico and stretches to the tip of Florida. Although still not widely used at present, marine current power has an important potential for future electricity source. This energy is more predictable than wind and solar power.

Many countries are seeking for ocean current energy, for example the United States. Unfortunately, this energy is still at its early development. Relative to wind, wave, and tidal resources, the energy resource potential for ocean current power is the least understood, and its technology is the least mature. There are no commercial grid-connected turbines currently operating.

Furthermore, the tested prototypes and demonstrations units are still remain in a small number. Several applications of tidal and in-stream current are in prepared to be commercialize, even though the ocean current energy is still in its early age. 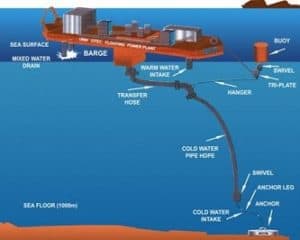 The source of ocean thermal energy derives from absorbed solar energy in the ocean. As we know, oceans are covering two-third parts of our planet.

Because of that, most solar radiation hit the ocean surface and then absorbed and stored in our ocean. In terms of heat energy, the amount of solar radiation absorbed by the oceans on an average day equates to about 250 billion barrels of oil.

This means that if even a small amount of the heat energy stored in the oceans could be harnessed, it would have the potential to produce billions of watts of electrical power.

There are 3 systems of ocean thermal energy conversion that have been used until now:

A liquid with a low boiling point, for example ammonia, is heated using the warm ocean surface waters. This produces steam, which then rotates a turbine to generate electricity. Cold water from the depths is then taken into the generator to cool the vapour which can then be recycled.

In these systems, the seawater itself is used to drive the turbine, as it is taken into a pressurised container where it boils. Once again, the deep cold water is then used to turn the vapour back into liquid again.

As the name suggests this combines elements of both systems. First, the warm surface water is vaporized, and this steam in turn vaporizes a low boiling point liquid which turns the turbine. 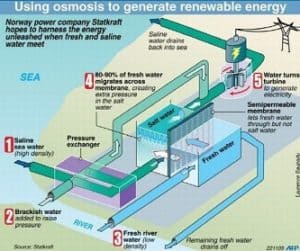 Osmotic Energy has two well-known names, there are salinity gradient power and blue energy. The source of this energy is the difference between seawater and river water.

Methods in this energy are reverse electro dialysis (RED) and pressure retarded osmosis (PRO). These processes await on osmosis with membranes. The key of this energy is a semi permeable, double-sided membrane that lets water through but captures mineral salts.

The most method used in extracting osmotic energy is pressure retarded osmosis (PRO). It converts the high salinity water (seawater) and water with no salinity (river water) into electricity source. The process of converting this energy needs to make the salt water meet the fresh water through a membrane.

Afterwards, the ions inside the salt water are processed in the membrane until the salt water and the fresh water reach its equilibrium, the state of osmosis. The salt ions which already contained electrical charge, will be extracted for our electricity needs. The osmotic energy is usually occur when a river meets the sea.

That is all information about the new alternative energy source, marine energy. Now we know that marine energy is useful for our daily electricity needs. Besides, it helps our earth to survive from global warming, since marine energy leave no dangerous gasses or other pollutants.

Acidification of The Ocean – Causes and Effects