15 Types of Stingrays In the Great Barrier Reef

Stingrays are species of fish that have a close relation to the shark species. Most people often mistake some species of stingrays as sharks because of the similar appearance. The difference lies in the fact that stingrays are often disc shaped with long, sharp tail. Here are 15 Types of Stingrays In the Great Barrier Reef. Read on to know more about the various species living within the Great Barrier Reef ecosystem. 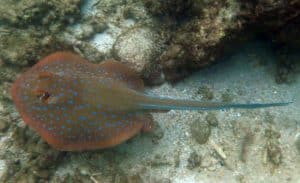 The Blue Spotted Lagoon ray is the most common species of stingray that is most often encountered in the Great Barrier Reef. The colour of this species is dark brown with blue spots all over its body.

The size of this stingray reaches 50 centimetres in length. As for its tail, it is approximately 70 centimetres. The Blue Spotted Lagoon’s tail is dangerous. This is because the tail contains mucus that is poisonous.

The poison may cause a lot of pain to those who got sting. It likes to camouflage itself among the sand. Extra caution is needed so someone won’t accidentally step on the stingray and get hurt. 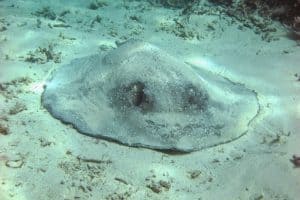 There are small, pointy thorns all over the body of the Porcupine Ray. This stingray is very large. It can grow up to 1.2 metres.

Its tail usually has the same length as its body. However, the tail contains no venom so this species is not poisonous. The species also has five pairs of gills that can be seen on the under part of its body. 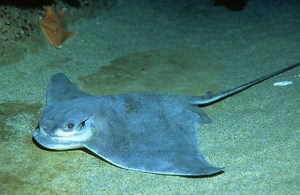 The Eagle ray is well known for its fondness of swimming close to the surface of the sea water. The stingray often displays aerial acrobats skill. It likes to jump out of the water at great heights.

When the Stingray swims in water, it looks like an eagle with wings. The size of this species vary. It can grow between 1 metres and 9 metres. This stingray rarely swims in the deepest, bottom part of the sea.

However, they do sometimes swim into the deep ends to feed on shellfish. Besides feeding on shellfish, the Eagle ray also likes to eat crustaceans and mollusks. Other than that, it is also a very active stingray. 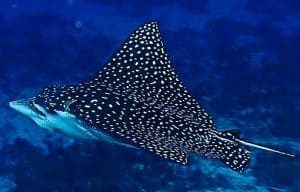 Similar to the Eagle ray, this stingray is highly active too. It likes to jump above water surface occasionally. There are even reports of it jumping on boats. The tail of this stingray is very long and there are stingers filled with venom located there. This stingray likes to eat fish and other organisms hidden underneath the sand.

The Guitarfish is a uniquely shaped stingray. The shape of this stingray resembles the shape of a guitar. The Guitarfish’s head is flat and small. Moreover, its head is also triangular which is unlike the other species of stingrays. 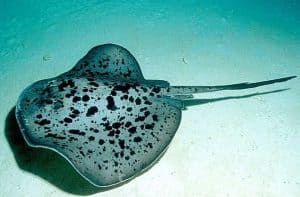 The Round Ribbontail Ray is another large species of stingray often spotted swimming in the Great Barrier Reef. This species of ray can reach 3.3 metres in length and 1.8 metres in width.

The body of the stingray is roundish with long tail. The eyes of the Round Ribbontail stingray is quite large. It also has a wide mouth.

The stingray also has a lot of teeth that are densely packed inside its mouth. Both the upper and lower jaws of the Round Ribbontail stingray may consists up to around 46 teeth. 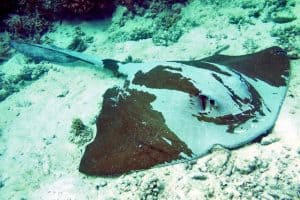 The Cowtail stingray is a popular species because of its skin. Many people in the fishing industry goes after this stingray because its skin can be turned into a type of leather.

Due to the overly amount of hunting, the population of the Cowtail stingray suffers a terrible decline. The length of this species can reach as much as 3 meters.

Its weigh may also measure up to 250kg. The body of the Cowtail stingray is thick and comes in dark grey or dark brown. Both of its eyes are small. The tail of this stingray contains venom. 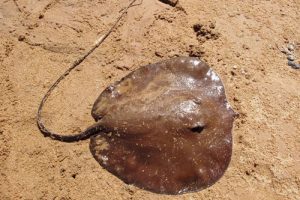 The Brwon Whipray is also a species of stingray in the reef. The body has a shape that resembles a diamond.

The size of the Brown stingray may reach 1.7 metres in length. Also, the colour of its body is brown just like its name.

However, there are a couple of white dots that may appear at the edges of its body. The tail of the Brown stingray is thin and is also filled with venom. The colour of the tail is usually black but it may also be in the dark grey colour. 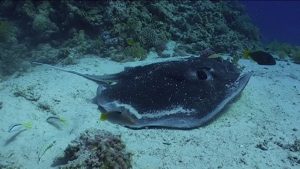 The Whitetail stingray has an oval shape body. Moreover, the overall built of the body is also thick.

The colour of the Whitetail stingray is extremely dark grey or brown. There are faint spots of white on its body.

As for the dark colour, it is caused by its mucus. Without all the mucus, the actual colour of the stingray is grey with a hint of orange. The tail of the Whitetail stingray is usually longer than the overall width of its body. 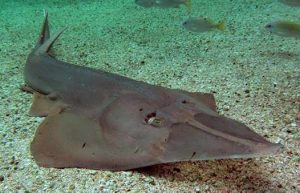 Giant Shovel-nosed stingray is found in the shallow parts of the water in the reef. The size of this stingray can be huge as it is able to grow up to 2.7 metres.

The snout of the Giant Shovel-nosed stingray also has a paler colourisation in comparison to its body. There are thorns present along the middle part of its body. 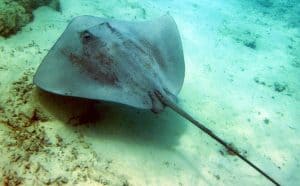 The body of this species also resembles the shape of a diamond. Its body is most often brown. However, there are also other Pink-whip Tail stingray species that are grey with a hint of pink shade. Its tail also looks as thin as a whip. 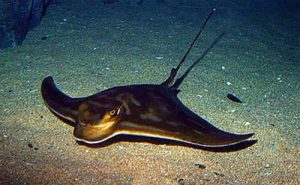 The female species of this stingray is usually longer than the male ones. The species is called a Bull due to the way its head is shaped.

The snout of the Bull stingray is long but round. Its tail is not that long as the average length is around 6.1 centimetres. The Bull stingray is very fond of feeding on many marine organisms such as squids, crabs, prawns and molluscs. 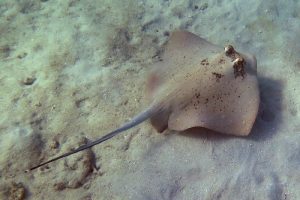 There’s a reason why this next species of stingray is given the name Maskray. The name comes from its unique feature which is a colour pattern that is visible around both of its eyes.

The colour pattern makes the stingray looks like it is wearing a mask. The Maskray might seem a bit intimidating as it has a line full of thorns growing in the middle part of its body.

The tail of the Maskray is short though. It is also black in colour. Other than that, the mouth of the Mask stingray is also small.

Find out more: Animals in The Ocean Biome 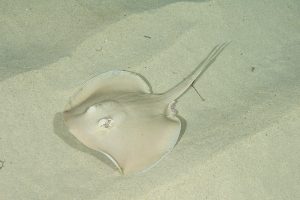 The Common Stingaree is a stingray that is round in shape. Its body is quite small as the average length of the stingray is only around 52 centimetres.

Its teeth are also small. As for the eyes, they are medium in size. The colour of the Common Stingaree is usually a dark hue of brown or almost olive green. It may also come in a variation shade of grey.

It may be hard to spot as it camouflages with the colour of the surface it comes close with. The tail has the same length as its body. The surface of the stingray is smooth with no signs of spots or patterns. 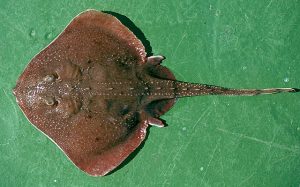 The last species that can be spotted in the reef is the Thorntail stingray. The stingray can grow up to 1.8 metres in length.

It may not sound that huge but its weight can be quite heavy. The average weight of this species is around 200kg.

The colour of this stingray is very dark. This species has a venom that could cause a lot of pain. But keep in mind that it does not attack humans unless the creature is provoked. There are also small thorns growing from its head all the way down to its back.

Each species of stingray has its own unique characteristic. That makes it easier to identify while looking in the water of the Great Barrier Reef. One should always be careful around the presence of a stingray though as it may be venomous.

17 Types of Dolphins In the Great Barrier Reef

17 Plants That Live In the Pacific Ocean