Home » Ocean Facts » 15 Importance of Salt in The Ocean

15 Importance of Salt in The Ocean 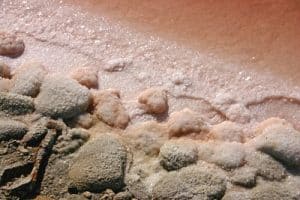 1. Controls protozoans on the fish skin and gills

Have you ever own a fish and kept it in the aquarium? Surely there are a lot of preparation you need to do in order to keep the fish alive inside the aquarium.

There is also one important component given inside the aquarium which is salt. Salt may help the fish in the aquarium prevented from the fungi that may exist in their scales and gills. This may cause disease till death to the fish. The same thing also applied to the ocean, this is why the salt content in the ocean is needed.

Mucus is a substance that may comes out from our body that actually act as a defense system. So when our body is threatened by virus or bacteria that may cause disease, mucus may comes out to clear out the bacteria and virus. This is not only happening to the human body but also animals. Salt in the ocean water is enhancing the mucus production of ocean animals.

3. Fulfilling the body needs of mineral

4. Keep the living being to stay alive

Salt contains sodium. And a little amount of sodium is needed in order to keep the pressure inside a cell in balance. The pressure or tension inside the cell need to be kept because if it isn’t then the cell may broken. This has become one of the importance of salt in the ocean, because without it, cells in living beings body won’t last long. And the beings may lead to death.

5. Adds up diversity in the ocean

If you pay attention, surely you will see clearly that the living beings in the saltwater and freshwater are different.

7. Affecting the movement of ocean currents

8. Maintaining one of the ocean habitat

Another importance of salt in the ocean is to maintain one of the ocean habitat. The existence of salt can help the cold temperature to stay stable.

This is important to the areas that is covered with ice which is North Pole and South Pole. The salinity level there is quite high compared to another tropical oceans. This can be seen through the living beings diversity in there which is not so many.

9. Help us to monitor the variance in water cycle

As we know the mineral salt that creates the ocean water taste salty is coming from the water cycle or natural activity. This natural activity may include hydrothermal vents, water that reacts with emission from volcanoes, and etc.

If there is no ocean circulation and the nutrient beneath the ocean can’t be distributed equally means there will be an area of the ocean that has no life.

See also: Climate of the Ocean – Importance of Ocean For The Global Climate

12. To monitor the oxygen intake of ocean living beings

Another importance of salt in the ocean is that it can help to monitor the oxygen intake of ocean living beings. The more salt means the salinity level will go higher.

And higher salinity level will decrease the oxygen intake by ocean living beings and this may resulting their metabolism system to go down.

Rocks in the ocean actually contains some amount of mineral that makes the ocean water become rich of mineral. Somehow, one of the component that is needed to form a rock is salt. This also become a reason why knowing the salinity level in the ocean is important.

14. Water resources to many living beings

If you are thinking that ocean water can only be consumed by fish and another ocean living beings, you are wrong. In facts, there are another living beings that also able to consume the ocean water even though it is salty in order to fulfill its body needs.

One of those beings is known as sea birds. Yes, sea birds, it is used to drink and consumed ocean water. Their body with a unique formation will release the salt through the salt glands that is exist above their eyes.

If the sea level keep rising you may imagine that there will be damage happened. The water comes from the sea may cover the land and kill the living beings there.

And please do keep following our website since there will be lots of articles that can help you to expand your knowledge as well as awareness towards the ecosystem surround you.

Thank you for the time given to read our articles, this also means that you have awareness towards the ecosystem.

15 Importance of Metallurgy in Marine Engineering