Rocks also can provide minerals that is needed by both human and marine living beings. And, Each types of the rocks that you can find in the ocean floor has its own uses both for our life or for the last of the marine life since it becomes an abiotic factor that supports the marine life. 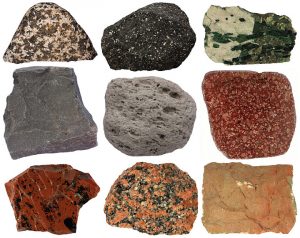 The first types of rocks on ocean floor we have is igneous rocks. Igneous rocks is formed from the molten volcanoes that is already cold and also magma or lava that came from the mid ocean ridges. So every time when there is a volcanic eruption, at the same time after that there will be formed igneous rocks.

Then, about the igneous rock’s texture, its texture is glassy due to the rapid formation. The example of igneous rocks are basalt, andesite, and granite. There are some benefits that we can get from the igneous rocks. For example, basalt is used in the construction and buildings. Basalt also becomes one common types of igneous rock that you might usually found. The color of this rock is usually black or grey. The black color is caused by the iron content that is produced by pyroxene and magnetite.

Meanwhile, the grey color or pale grey is caused by the  plagioclase. Unlike metamorphic rocks, the minerals inside most of the igneous rock is indistinguishable by their color or by our naked eyes. Granite, is used to make gravestones, countertops, and statues because it can last for long or durable. Andesite can be used for an aggregate or fill but due to the high concentration of silica it becomes not an ideal aggregate or fill. Up to now, there are about 700 different igneous rocks that is exist in the ocean floor which has different composition to one another that make them diverse. 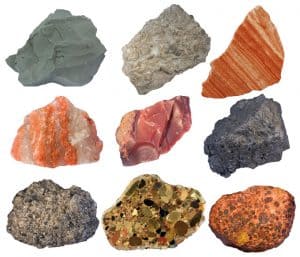 The formation of sedimentary rocks also can came from the compression of sand, dirt, and sediment. The deeper you are burying something beneath the ocean the higher pressure and temperature that will you get until it cemented or lithified together.

From the sedimentary rocks, mineral is formed from a solution (chemical homogeneous mixture), detritus or also known as organic materials is also formed and it becomes food for some marine living beings. Some examples of sedimentary rocks are sylvine, carnelian, phosphorite, conglomerate, and bauxite. Now let’s we try to get to know more about bauxite.

Bauxite is one type of rock that is rich on aluminium and basically people known bauxite as the principal ore of aluminium. And mostly, the color of bauxite is reddish due to the impurities caused by iron and hydroxides.

For the example is schist, schist it self contains one type of mineral that is composed from lamellar minerals named as micas. Shist also becomes the most widespread types of rock that you can find in the continental crust. Some types of schict contains a lot of minerals but some are not. And even sometimes their color can define what kind of minerals inside them.

Such as the green color in the schist rock can define that the rock contains chlorite. About its use it self, marbles usually is used for building materials and also artworks. And because metamorphic rocks is can be formed from both igneous and sedimentary rocks, when the metamorphic rocks experience sediments deposition, erosion, and also weathering it can be transformed back into sedimentary rocks.

Then, if the temperature is too high, the metamorphic rocks can be transformed back into magma and if it is cooled down it will be an igneous rocks.

So those are the types of rocks on ocean floor based on the way it is formed that maybe you don’t know before. Hopefully, by reading this article your knowledge about the ocean is expanding and your awareness toward our ecosystem is increasing. Thank you so much for being our loyal reader and follower. And, keep following our website deepoceanfacts.com for more interesting yet informative articles because there will be more to come.