Home » Scenery » Why are Beach Sand White and Black?

Sand is a material in the form of granules with a size of 0.0625 – 2 mm. Sand comes from various kinds of objects, usually in the form of rocks which later due to experiencing various kinds of processes turn into small grains. Rocks come from erupting volcanoes. This type of rock determines the color of sand that is on the beach.

White sand beaches, for example, are caused by rocks in the local mountains that contain a lot of lime. The color of black beach sand is caused by many rocks containing alluvial soil. The color of bluish and greenish seawater can be used as additional information.

In addition to the colors of black and white sand that we have commonly encountered, there are beaches in Indonesia where the sand is pink or reddish. Actually not all sand is pink, but it is a mixture of white and red. This red color comes from coral, shellfish, and calcium carbonate from marine animals there.

In addition, this red color also comes from microscopic creatures named foraminifera which have a reddish body shell. If you want to see it directly, this pink sandy beach is on Komodo Island, Flores, NTT or in Harbor Island, Bahamas.

Green sandy beaches also exist, namely in Papakolea, Hawaii. The sand of this beach is surreal dark green like grass because it contains olivine minerals, the main element produced by volcanic lava deposits in Hawaii.

Here are some factors that influence the color difference between beach sand. 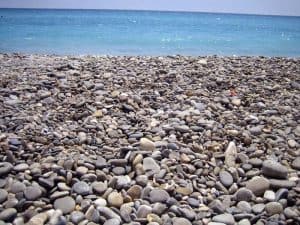 Sand is a material that comes from the natural process of stone destruction with a very long time. Not all stone material is eroded and then becomes sand. But only the hard part turns into sand. The rest dissolves with water. Maybe some of you think that sand immediately emerges from a rock hit by a wave, even though it’s not absolute like that.

Stones turn into sand more due to weathering for hundreds of millions of years. Many things are factors of weathering, such as drastic temperature changes, changing weather, strong winds, and other natural factors.

Easily, you can find out the origin of the sand on the beach from the rocks around you like the cliffs and hills that are there. Like a cliff that is constantly blown away by waves, then erosion.

The fragments carried by the waves and piled up on the shore. So, usually, if the colors of hills or cliffs around the beach are white, the color of the beach sand is also usually white.

This erosion is usually from friction between river currents and other rocks. It can also be caused by changes in weather that make rocks easily weathered and broken into small grains. After reaching the estuary, the granules have become very fine material.

This process lasted for thousands of years and continues today. Try to imagine how many tons of material carried by the river water flow to the beach. Some material that is insoluble by water will settle with other materials on the beach.

Some wonder how volcanic lava can reach the beach, though the distance to the beach is not exactly close. The answer is in the river. It is the river that carries a variety of volcanic materials that are close to the upstream to finally reach the beach.

The characteristics of volcanic material on the beach can be marked by the presence of black sand surrounding it. The material in the form of black rocks is volcanic lava that flows into the sea and then hardens.

One example is Parangtritis Beach. The beach sand there has a dominant black color. This is influenced by the existence of Mount Merapi which produces volcanic material in large quantities. Even the flow of lavender once flowed to the southern coast of Yogyakarta.

The existence of millions of types of marine biota of various types and colors can also be a factor. Marine biota such as fish and corals can apparently become a beach sand constituent material. Like a coral reef that can be eroded by waves of seawater.

Another biota is marine animals that have shells. Usually, after they die and leave their shells, in a long time the shell breaks and becomes a sand-making material on the beach, for example, Pink Beach on Lombok. The pink color of the beach comes from a mixture of eroded coral flakes, crushed shells, and microscopic shells named foraminifera which has bright red shells.

Those are the cause of white and black sand color phenomena. Hope this can improve your insight and knowledge. Happy learning!

Revealing the Secret behind the Beauty of the...

7 Types of Beach Based on the Formation...