Revealing the Secret behind the Beauty of the Rainbow River Phenomenon

The nickname Blue Planet deserves to be carried by planet Earth. How not, most parts of the Earth are waters and the rest are land. As we know, water is an inseparable part of the life of every living thing. You can imagine, what happens if the water in the world runs out? It could be that the continuity of life on the planet where we live today will be disrupted and culminate in the extinction of all living things.

Maybe some of us already know that the surface forms of the mainland and the waters of each have their own characteristics. In the shape of the land surface of the land can be found in the form of highlands, lowlands and so on. If you are not familiar with the name of the river, it is part of the waters that exist on Earth.

Talking about rivers, since ancient times, people have known about the benefits of rivers for human life. There are many activities that can be found in the river, such as washing, bathing, and alternative water sources besides wells. Did you know, if in this world there is a very beautiful river that is famous for its colors, it is not surprising if this river is known as the rainbow river. Intrigued as to what the rainbow river is, here is the discussion. 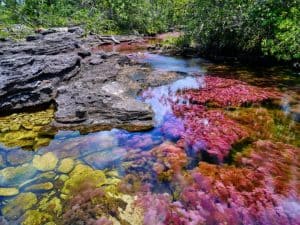 The name of the rainbow river is Caño Cristales and can only be found in Serranía da la Macarena, Meta, Colombia. It turns out that this river has other names, namely the Five Colors River and the Most Beautiful River in the World. The beauty of the rainbow river is evidenced by the yellow, red, green, blue and black colors found on the Caño Cristales river. However, the colors of the river can only be seen at certain times.

To be able to see the beautiful colors of the rainbow river, you can see it from July to November. Throughout the month, the river will emit a very interesting blend of colors. According to residents who live around the river, the best time to be able to enjoy the beauty of the river is that after heavy rains or storms because at that time, the colors produced will be increasingly sharp and very bright.

Causes of Rainbow Color that Appears on the Caño Cristales River

If you think of the colors found on the Caño Cristales River as a result of the color of the river itself like the color of the river in general, which is clear to chocolate that we can find in other places, you are wrong. After being examined, it turns out that the color comes from the reproduction of aquatic plants that are inside the river called Macarenia Clavigera. Macarenia Clavigera itself is still a group of algae. In addition, the river water flow also influences the formation of five colors becoming increasingly clear.

Why does the role of river currents also influence? Because the river flow can regulate the arrival of sunlight until it can reach the plant so that it can make photosynthesis. When the rainy season arrives, Macarenia Clavigera plants can get more sunlight because the volume of water in the river increases so that the river flow becomes very heavy. Whereas in the dry season, sunlight does indeed shine very brightly and it strongly supports the growth of Macarenia Clavigera plants but the river flow is not too heavy to be able to irrigate plants. Therefore, to be able to see the colors of the river can only be done at a certain time.

The last few years, Macarenia Clavigera continues to grow in the river. So that in a certain period, which is between the wet month and the dry season where the river water level is at the right volume, Macarenia Clavigera looks very beautiful with its red color. The red color is very beautiful combined with the blue color of water, moss green, black river rocks, and yellow sand.

The Caño Cristales River in an isolated area and is part of the Serrania National Park making it difficult to reach. To get to this river, there is no mode of transportation whatsoever, so visitors must walk or ride a horse to get to this place. Based on local government regulations, visitors are only allowed to arrive in mid-May to early December. This is an effort to protect the Caño Cristales River ecosystem from environmental damage.

In addition, if you are interested in visiting this place, things to remember are prohibited from using sunscreen or anti-insect creams and are allowed to swim in certain areas, which are areas not covered by Macarenia Clavigera. Of course, this aims to not damage Macarenia Clavigera plants and also pollute the waters. To get good photos, you need to pay attention to the weather around the river. If it is cloudy, the reflections of the resulting colors are less clear and when there is a drought which results in a reduced volume of river water, Macarenia Clavigera plants will decrease in number and turn brown.

If you have reached the Caño Cristales River, maybe you will be a little disappointed because it is not as expected. As explained above, the beauty of the colors of the river depends on the sun’s rays and the flow of the river that flows. So, the role of climate and weather greatly affects this place.

To visit the rainbow river, visitors must use the services of a certified guide because visiting a place in the National Park area needs to get permission from the National Park. There are certain amounts and limits for the number of visitors each day. Visitors may come without assistance from guide services, but license to access the area is very not that easy.

7 Types of Beach Based on the Formation...