So far, many ordinary people think that volcanoes are located only on the land, even though such assumptions are clearly wrong because actually mountains can form anywhere in the surface layer of the Earth’s surface, either on land or on the seabed or ocean. Indeed, for several thousand years since human civilization emerged, there is not much information about what is contained in the oceans and this is caused by the lack of knowledge.

When entering the 20th century, marine science and technology have increasingly developed so as to enable humans to make observations to uncover the veil of mystery that is in the ocean. For decades, scientists have tried to map the surface of the Earth located in the ocean, and the results are very surprising because there are many volcanoes that have been hiding behind the ocean.

The Process of Forming an Underwater Volcano 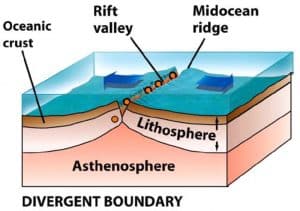 It is predicted that there are around 5,000 volcanoes located under the sea around the world of various sizes, ranging from standing singly to forming mountain ranges which consist of several volcanoes. One of the highest points will appear above the sea surface as an island, others have peaks that are not far from sea level.

The following is an explanation of the process of forming submarine volcanoes:

Just like land, the ocean also has a structure of rock layers that make up the Earth’s crust. It should be noted that the Earth macaques are divided into two categories, the first continental crust with thicknesses between 20 to 70 kilometers and second, oceanic crust which only has a thickness of 5 to 10 kilometers.

Because oceanic crust is relatively thin, the rock structure is weak so it is easily penetrated by magma originating from the bowels of the Earth. This continuous magma will form a new oceanic crust and this process is referred to as Sea Floor Spreading, also known as ocean floor expansion.

The ocean floor that blooms triggers the discharge of liquid magma which is wet in the form of lava to the surface of the ocean floor continuously so that in a long time it will accumulate its deposits and rise to form a volcano. If the magma activity continues, the sea volcano will grow higher and bigger to form an island like what happened to the mountain of Krakatau children in the Sunda Strait.

Similar to a mountain located on land, even a volcano under the sea can erupt, the scale of its awesomeness depends on how strong the magma pushes from the bowels of the Earth. But underwater volcanic eruptions have a greater negative impact because there will be further consequences and potentially many fatalities and can accelerate the cause of global warming.

Here are some dangers of the underwater volcano:

This is the reason why submarine volcanoes are potentially dangerous when compared to those located on land. Tsunamis are a secondary effect that starts from a volcanic eruption that disrupts and impacts volcanic eruptions such as sea level equilibrium so that waves will rise higher when approaching the coastline. Although Tsunami events caused by volcanic eruptions like this are rare but need to be watched out especially for people who live on the coast of the sea which is located close to the volcano.

Like the volcano (which is located in the Sunda Trench or 330 kilometers southwest of the city of Bengkulu) which is known to be 50 kilometers in diameter and has a height of 4,600 meters. The peak of the volcano is about 1,200 meters above sea level and when it erupts it will cause a Tsunami wave which is expected to sweep away the Enggano Island and the coastal province of Bengkulu. 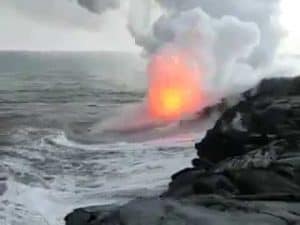 Just like volcanic eruptions in general, volcanoes located on the ocean floor can also cause various damage such as coral reefs and living things that are inside. This of course will disturb the marine ecosystem around the location of the eruption. Even though it is under the sea, the incandescent lava released by the mountain is still at high temperatures, reaching hundreds of degrees Celsius.

Such a high temperature cannot be accepted by living creatures in the sea so that it will cause mass deaths of organisms especially those that cannot move such as coral reefs and others.

More than 60 percent of the Earth’s surface is covered by the oceans, so this makes the oceanic area store many things that humans have not yet known, including volcanoes located under the sea. However, based on the results of research conducted over many years, there are around 5,000 volcanoes scattered in various oceans of the world such as the Pacific, Atlantic, Indian, and others.

Here are some of the most famous underwater volcanoes in the world:

(Also read: 13 Function Of Sea Waves You Must Know)

The process of volcano forming under the sea is rather complicated but we should always be aware of the danger it causes. Once it happened, it could threaten the life of living things.