Sea waves are the shape of the sea surface in the form of a back or peak of a wave and a trough or valley of waves by oscillatory movement due to wind blows, volcanic eruptions, seabed sliding or ship traffic (Sunarto, 2003). Sea waves have dimensions namely wave period, wavelength, wave height, and wave propagation. 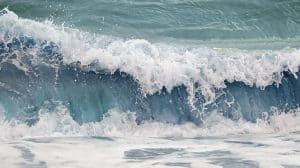 Wave period (T) is the travel time between two peaks or two waves of waves in sequence at a fixed point (units of seconds). Wavelength (L) is a horizontal distance between two consecutive peaks or two valleys (meters). Wave height (H) is the vertical distance between the peak of the wave and the valley of the wave (meters). Wave propagation (C) is the travel speed of a wave, which can be obtained by dividing the wavelength (L) by the wave period (T) or C = L/T. Holthuijsen (2007) explains that ocean waves are the rise and fall of seawater in a direction perpendicular to the sea level that forms a sinusoidal curve/graph. (Nichols et al., 2009 in Bagus, 2014) explained that ocean waves arise due to the force of the plants acting on the sea. Waves that occur in the oceans can be classified into several types based on their generating force, the force of the plant mainly comes from the wind, and from the attractive force of the Earth – the Moon – the Sun or what is called the tidal wave and earthquake.

The height and wave period depend on the length of the fetch generator. Fetch is the distance traveled by the wave from the beginning of its generation. This fetch is limited by the shape of the land that surrounds the sea. The longer the fetch distance, the greater the wave height. Wind also has an important influence on wave heights. Stronger winds will produce bigger waves.

Waves that propagate from the deep sea (deep sea) to the beach will experience a change in shape due to changes in the depth of the sea. If the wave moves closer to the coast, the wave movement at the bottom that borders the sea floor will slow down. This is a result of friction between the water and the sea floor. Meanwhile, the top of the wave on the surface of the water will continue to accelerate. The more the wave moves towards the beach, the crest of the wave will get sharper and the valley will be flatter. This phenomenon causes the wave to break.

There are two types of waves from the properties, namely constructive waves and deconstructive waves which include the beach-forming wave, characterized by having a small height and low propagation speed. When waves break on the beach, transported material will be left on the beach (deposit) that is when the return flow from the breaking wave seeps into the sand or the sediment will slowly flow back into the sea. Waves that do not form a beach usually have a large height and velocity (very high). Returning water has less time to seep into the sand. When waves come back to hit the coast there will be a lot of volume of water collected and transporting beach material to the middle of the sea or to other places.

Careful observation of ocean waves turns out to show that wave water does not move forward, but rather moves circularly, so that the water only moves up and down once the wave passes. The beach edge holds the base of the wave, so the wave crest moves faster to break down on the shore. Waves move across long distances, but mediums (liquid, solid, or gas) can only move limited. Thus, even though waves are not a matter, wave patterns can propagate on the matter.

In an effort to explain the process of growing waves at sea, many theories have been put forward by experts, but there are only two theories that complement each other and can explain the growth of waves in the ocean.

The first theory put forward by Phillips (1957), states that: Turbulence in wind causes random fluctuations in sea level that produce small waves (ripples) with wavelengths of several centimeters. These small waves then grow linearly through a resonance process with fluctuations in turbulence pressure.

The second theory put forward by Miles (1957), and known as the theory of instability or feedback mechanism, states that: When the size of growing small waves begins to disrupt the flow of air above it, the blowing wind gives pressure which gets stronger as the wave size increases, so the waves grow into large ones. The process of transferring this energy takes place unstable, the larger the wave size, the faster the wave. Instability causes waves to grow exponentially.

Along with the growth process, growing waves that vary in energy and frequency interact to produce longer waves. Interactions that occur involve the process of transferring energy non-linearly from high-frequency waves to waves of lower frequency. The theory of nonlinear interaction is brought about by Hasselmann (1961; 1963), and Hasselmann, et al., 1973. The process of transferring this energy causes long-period waves to have higher energy. If the wave period is long enough, the wave velocity can exceed the forming wind speed, so that waves can come out of the growth area.

The shape of a wave shows the movement of water particles inside the wave. Even though the wave moves forward, the particles in the wave will leave traces that form a circle. The circle of tracks made by particles will be smaller according to the greater depth below the surface of the wave.

The waves formed in the growth area are called “Sea” and the waves that have or can get out of the growth area are called “swell”. In its growth area, waves have a varying frequency, size, and direction of propagation, so that the sea surface appears irregular. Size variations and swell frequencies are limited to low-frequency waves that are close together, so that wave propagation is regular and clearly visible at sea level.

Wave classification based on size and cause (Pond and Pickard, 1983):

3 Types of Tsunami Based on Occurrence Time...

Process of the Occurrence of Waves People Should...

13 Function Of Sea Waves You Must Know

25 Characteristics of Waves in The Ocean