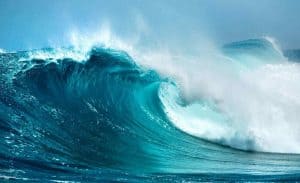 Before getting down to the difference between ocean wave caused by wind and tsunami wave, it is better for you to know in advance about sea wave (Read more: Function Of Sea Waves).

Sea wave is a wave that has a large size. The size of ocean is particularly large, so there must be wave, and large wave can also be said to be wave.

This wave can be in the middle of the open ocean but can also reach the coastal area so that it has the potential to hit something around the coastal ecosystem. (Read more: Functions Of Ocean Waves and Effects of Ocean Waves On Shorelines).

Sea wave that arise due to wind are ocean wave that appears on the surface of the sea. We all know that the high sea must be occupied by lots of wind, especially in the mornings and evenings. At that moment, sea and land winds emerge.

At certain times, the wave created by the wind can grow large in size; though this process depends on the strength of the wind that appears. Briefly, ocean wave caused by wind is wave that is formed due to wind impulses.

For example, if we blow the surface of the water, as the consequence, a wave will appear.

Tsunami wave is wave that is formed due to the presence of endogenous power from within the Earth, usually in the form of earthquakes of which the epicenters are at the shallow depths.

The wave can appear in large and sometimes moderate forces; this depends on the endogenous forces that exist.

To be clearer about the differences between wind wave and tsunami wave, we will divide them into several points, including the following:

Sea wave caused by wind have the following characteristics:

Tsunami wave is a wave that has the following characteristics:

10 Deepest Seas in the World and the Secret behind Them

3 Types of Tsunami Based on Occurrence Time...

Process of the Occurrence of Waves People Should...

13 Function Of Sea Waves You Must Know

25 Characteristics of Waves in The Ocean