Tsunami disaster is a natural disaster caused by a shift in the Earth’s plate on the sea floor which causes tremendous vibration and makes the water from the seabed overflowing to the mainland. According to the meaning of the word, Tsunami comes from Japanese, where tsu means port and nami means wave. So, literally, Tsunami means big waves in the port.

The cause of the Tsunami can be erupting mountains, earthquakes, landslides, or the fall of meteors to the surface of the Earth. However, 90% of cases of Tsunami disasters occur due to Earthquakes from under the sea. Vertical movements that occur in the Earth’s crust cause the sea floor to rise or fall suddenly. Such event disturbs the balance of the water above it. There was a sea energy flow which when it arrived at the beach became a very large wave that could cause a Tsunami. In the deep sea, Tsunami waves can travel at the speeds of 500-1000 km per hour, equivalent to the speed of an airplane.

(Also read: 25 Characteristics of Waves in The Ocean)

Types of Tsunami Based on Characteristics

To be able to realize the possibility of a Tsunami disaster, we need to know the type of Tsunami that exists by paying attention to the signs, such as Earthquakes with considerable strength, ranging from 7-9 on the Richter scale.

Also, we need to analyze the condition of the sea water, if suddenly it recedes after an Earthquake occurs, then we must be vigilant, because it can only be the energy flow of the middle sea by pulling in water before spewing it out with greater force. In addition, we need to pay attention to unusual natural signs, such as wind movements, the roar of the sea, even the behavior of wild animals.

Often Tsunamis are misinterpreted by the tidal wave phenomenon. This is because water that reaches the land appears like a high tide wave, rather than ordinary waves.

In accordance with the time of occurrence, the following types of Tsunamis. 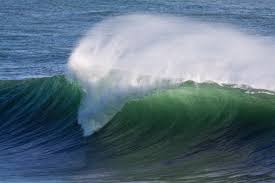 It is called close or local because the break since the Earthquake occurred causing a Tsunami occurs after 0-30 minutes. The distance from the epicenter to the Tsunami location is 200 km. The area around the Earthquake may feel extreme vibration to cause damage to the building. Usually, short distance tsunami is strong and the wave is unusual. The sign before a Tsunami is that the intense vibrations are accompanied by tides. It’s also called a killer wave and usually it happens in hours.

The Earthquake detectors often used are as follows:

In Indonesia, both devices are installed in the same place on a shelter in the beach area which is equipped with a danger marker alarm. The first warning came from the accelerograph, and then followed by a warning from the tide gauge when a sea level change occurred.

The warning was conveyed to local residents in the form of alarms, officers or local officials to start the evacuation process, and the central BMG for monitoring and emergency information to be disseminated to other potential areas. 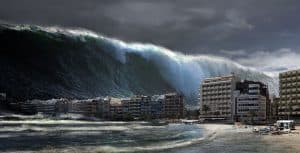 It is said to be medium distance, because the lag time from after the Earthquake to the Tsunami is 30 minutes to 2 hours. The distance from the epicenter to the location ranged from 200-1,000 km, which may still experience Earthquakes with intensity II to V MMI (Modified Mercalli Intensity). The sign before a Tsunami is a strong vibration and is often followed by tidal seas. The alarm device also has an alarm to give a warning sign, but perhaps the accelerograph is not enough because the vibration is weak.

It is called long distance, because the time lag after the Earthquake to Tsunami can be more than two hours. The distance of the location from the Earthquake point exceeds 1,000 km, which is why local residents will not feel the Earthquake. Tides are still possible before the Tsunami waves arrive. In that area, no accelerograph is needed.

Hopefully the information contained in this article can be useful for you. Make sure you learn about these 3 types of tsunami, so that, you can tell others how it could happen and precaution actions.

(Also read: 13 Function Of Sea Waves You Must Know)