Process of the Occurrence of Waves People Should Be Aware Of

The process of waves usually consists of a wind that blows and pushes the surface of the water so that it will generate a movement. Other than the wind, the cause of the waves can also be conducted by other things such as earthquakes or the gravitational force of the sun and moon.

As we all know, the ocean would have never budged. No matter where you see it from, you will always be able to the see waves on the surface. Those waves are formed through energy that moves through water, causing it to move in a circular motion. But, do not misunderstand things, water does not move in waves; if anything, it is the waves that carry energy, not water. 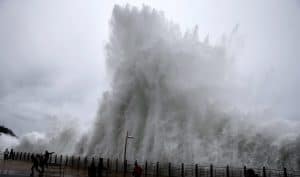 Waves that are potentially dangerous are caused by bad weather, such as storms, or winds that blow in great strength. The strength of the wind and the pressure from this storm resulted in a large series of waves. Other factors that influence the occurrence of these dangerous waves can be caused by interference from below sea level such as landslides, earthquakes or volcanic eruptions. Those factors generally result in a tsunami disaster.

Waves found on the surface of the sea are generally caused by the flow of energy that comes from the wind and then passed to the surface of the sea water. Typical large waves can move far enough. In addition, the size and shape of the waves depend on the speed and duration of the wind, and also where the area affected by the wind is located. The smallest type of wave is the ripples of water, while the biggest waves of water appear from the middle of the ocean where there is a vast stretch of ocean. Places that are often hit by waves of great waves usually attract the attention of surfers.

Big waves do not only occur near the land. When a storm happens, more often than not, large waves can occur as high as 20 – 35 meters and those waves are usually very difficult to predict. They are like walls made of water and no one knows what caused those high waves to appear. However, some scientists judge that high waves tend to form when the two types of oceans are intertwined with each other.

As mentioned above, wind is not the only the cause of large waves. Tsunamis, for example, are large waves that form high waves and contain a lot of water overflowing. Tsunamis are like landslides in the form of liquids which waves can destroy population settlements, especially those on the shore since the wave heights could exceed 20 meters at some point. Since 1850, the tsunami has led to more than 420,000 deaths of which 230,000 were victims of the giant earthquake in Aceh, Indonesia back in 2004. 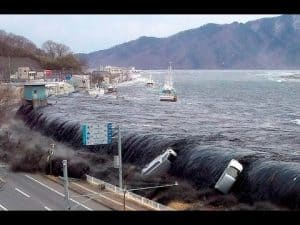 There is also the damage caused by the Fukushima nuclear reactor in Japan by the 2011 tsunami. Although tsunamis cannot be predicted with certainty every time an earthquake occurs, tsunami warnings will still be able to be disseminated and then, any waves detected will be considered as early warnings. Therefore, the community can evacuate before a disaster actually occurs. Such action is highly necessary because the speed of tsunami waves can reach 650 km/hour, a speed that is truly inevitable.

The air has mass and therefore, air has pressure so it can suppress the air in the bottom layer of the ocean. This pressure is also influenced by Earth’s gravity. That is why air pressure in lower areas is more compressed than in higher areas such as mountains, for example. The air pressure difference can also affect the temperature in the region.

Theoretically, the wind created at low air pressure plays an important role in the formation of strong waves. In this system, the wind speed is greater so that more waves are created from the gust. The friction formed from these winds helps form waves of energy that travel thousands of kilometers away to hit something (usually a coastal region).

If the wind created in this low-pressure air continues to blow above the sea surface for quite a long time, the water waves created will be even bigger because the energy accumulated in the waves has formed. Also, if this wind affects a large area in the ocean, the waves formed will become stronger, creating very large waves (Refer to 12 Causes of Ocean Tides Rise and Fall – Effects for further reading).

Ocean waves can be classified in many types. One of them is a classification that utilizes the power that creates the waves. Here are the types of waves based on the strength that gives them:

Waves in the ocean are also categorized according to their formation and behavior. Here are some types of waves in the sea:

Those are the explanation of the process of the occurrence of waves and their types. We hope it may be useful for you.

List of Countries that Do Not Have Sea (No. 3 is Unexpected)