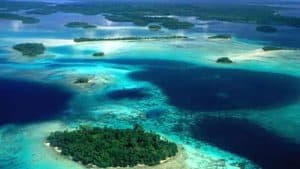 There are some archipelago states in Oceania region. Oceania region is the term for geographical region in New Zealand, Australia, and some small islands in Pacific Ocean. Some countries those are in Oceania are  Fiji, Marshall Islands, Vanuatu, Kiribati, Nauru, Mikronesia, Australia, New Zealand, Tuvalu, Tonga, Samoa, Palau, Papua New Guinea, and Solomon Islands. Oceania region itself has a lot of beaches those are well known for the beauty. No doubt if this region is visited by a lot of foreign tourists every year to spend their holidays.

One of the most visited countries by foreign tourists in Oceania is Solomon Islands. The geographical position of Solomon Islands is is not too far from Indonesia. It is exactly in the east side of Papua New Guinea. According to its name, Solomon Islands consist of some islands like Malaita, Santa Isabel, Gaudalcanal, Makira and Sikaiana. To know closer Solomon Islands, here are the explanations of this archipelago.

For the first time, Solomon Islands was visited by a Spanish Explorer, Alvaro de Mendana, in 1568 and named that island as Islas Salomon. The name given was not unreasonable. Solomon or Sulaiman is figure in a heaven religion and was a wise and righteous king who had abundant wealth. When discovering that island, Alvaro de Mendana expected to find the treasure of King Solomon.

Solomon Islands has 992 islands in total with 5 main islands. It is geographically located between 5° – 13° south latitude and 155° – 169° east longitude. Its capital city is Honiara that is located in Guadalcanal island. Solomon islands is 28.896 km² wide with population of 647.581 people in 2017. Geographically, Solomon islands is close to equator so that it has tropical climate like Indonesia. Its climate is equatorial sea which is humid enough in the whole year with average temperature up to 26.5° C. From the beginning of June till August, the weather is normally cold. But when the wind from the northwest blows between November and April, it will affect to rain or cyclone storm.

In the government system, Solomon Islands became a Constitutional Monarchy of which the head of the state is a Prime Minister that is a political party leader or the biggest political coalition who win the legislative election. Solomon Islands is divided into 9 provinces and 1 territory capital city. The 9 provinces are Central, Choiseul, Guadalcanal, Isabel, Makira – Ulawa, Malaita, Rennell and Bellona, Temotu and Western.

After being an independent country, Solomon Islands started dealing with various conflicts. One of it is civil conflict. This began from many immigrants those came from many islands of Solomon including Malaita island (an island with the most population) to the capital city, Honiara, which is located in Guadalcanal island. In 1970s the number of immigrants increased while the number did not equal to job vacancies. Then it finally became a conflict between native people of Guadalcanal island with the immigrants.

Even though the infrastructure was developing, it had not yet given positive impacts to the people in Guadalcanal itself. Since 1970s many native people of Guadalcanal island sold their land to the industry practitioners. But they got low price and unequal to its compensation. The problems occurred when the young group were not satisfied with the sale of the land because it was not profitable. As the result, conflict happened to native citizen and the industry land owner.

The conflicts in Solomon Islands kept going on till it brought up the armed groups in 1998. This group belongs to native citizen of Guadalcanal island that firstly attacked the settlement of Malaita immigrants in the southeast of Guadalcanal island. It was known that the attacks were done by Harold Keke and Joseph Sangu. Both of them were arrested but then released after paying the ransom. That punishment did not make Harold Keke to be wary. Contrariwise, he succeeded to gather the people and established Guadalcanal Revolutionary Army or GRA.

GRA kept attacking the people of Non-Guadalcanal to chase them away back to their origin island. Till finally Malaita Eagle Force or MEF was established by people of Malaita who were chased from Guadalcanal islands. In a short story, Solomon Islands almost got destructed till finally Solomon government asked some helps from other countries to send security forces from 20 countries of Oceania called Regional Assistance Mission to Solomon Islands (RAMSI). Step by step, the security level in Solomon Islands increased until Harold Keke surrendered and all arming activities stopped. RAMSI itself was still in Solomon Islands till 2013 and return their active troops gradually.

Those are some information about Solomon Islands. Hopefully, the explanations are helpful to increase our knowledge.