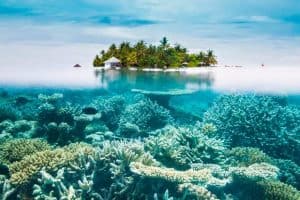 Maldives Islands is paradise for the tourists. The beautiful beaches and underwater scenery interest tourists to visit this cluster of islands in Indian Ocean. This archipelago has clusters of beautiful small islands with 26 atolls in the southwest of India.

The country of which capital is Male was free from England in 1965. The government system is Presidential Republic, governed by a President that is voted directly by the people, with 5 years of governing period. The country of which national anthem is Gaumee Salam was formerly Constitutional Monarchy. It was then changed after referendum in the third year after independence. The word of Maldives came from Sanskrit that means string of islands that interests explorers to come to this beautiful islands.

Maldives Islands is 298 km² width and consists of islands clusters. Maldives is astronomically located between 1º – 8º north latitude and east longitude. Maldives is geographically in Asia Continent.

Maldives becomes a country with the biggest Moslem population as 100% of the population are Moslem. The history of ancient explorer like Ibnu Batuta who crossed  Maldives before crossing Moslem India becomes the history of this archipelago which is populated by 392.473 people. In the other history, a Sinhalese prince, KoiMale, was stranded with his couple, a daughter of Sri Langkan King and live there as the first Sultan. For some centuries, this archipelago had been visited by Arabic and Indian sailor. In the fifteenth century, Portuguese colonized this archipelago for 15 years till finally it was taken again by M. Al-Azam.

Maldives people rely on the sector of tourism and fishery. Around 700.000 tourists per year visit Maldives to enjoy its beautiful nature and fisherman’s life. Some sandy lagoons become a special tourist destination. The tourists may stay in the water suites and villa along the beach to enjoy and relax.

To visit Maldives, tourists must use sea transportation like boat that deliver to some islands in Maldives. Enjoying the beach, exploring along the beach, or diving become the choices of activities for the tourists. In the night, tourists may enjoy dinner, entertained by music and natural lighting from the marine microbes, phytoplankton, make a beautiful blue light. This phenomenon increase the attractiveness of Maldives as exotic beach with many resorts on it.

Even though it is not a big archipelago, but in tourism sector, Maldives succeed to achieve recognition as World Leading Beach Destination 2015 and 2016 at The World Travel Award. Maldives also succeed to achieve diving record in 2006 with 958 divers in total dived into the water all together. Beside tourism, Maldives now becomes one of fish exporter to many countries in Asia and Europe. Maldive population consist of South Indian and Arabic ethnics with income per capita US $ 19.200 (2017)

Fishery sector especially tuna fish export either raw or proceeded become one of the most important income in this country which use Rufiyaa currency. Maldives has income per capita US$ 19.200 and domestic gross income US$ 6.901 millions. Beside that, the other industries of Maldives are: shipping industry, coconut processing, woven mat, rope, handy craft, coral and sand mining. Due to most of Maldives territories are sea, most of food must be imported from abroad. Only few of plants can grow in this archipelago such as coconut, banana, mango, papaya, onion, breadfruit, taro, and cassava.

Islamic Law is applied by local people. For example, shops and business centers are closed 15 minutes before praying time. Some of the islands have several mosques, the biggest one is in Male Islamic Center. In the middle of 1991 Maldives has in total 725 mosques and 266 special mosques for women.

Behind the image of Maldives, in fact it has big problem which is big debt to China. Maldives is even threatened to be taken by China. It was reported that China had taken over 16 islands. In 2017, the debt from Exim Bank China for Maldives was estimated around 726,6 millions Maldives Rufiyaa or 46,9 million US Dollars that was used for building houses, airports and bridges. As the result, Maldives is now threatened to be bankrupt by China.