There are so many natural events and phenomena that we can meet on Earth. Apart from the phenomenon that has been found in scientific explanation, it turns out that on Earth there is a secret that is still a mystery to most humans. Yes, this phenomenon is often connected as the cause of the loss of ships sailing and aircraft that suddenly disappear after crossing it.

Then the missing ships and planes were never found and left a mystery. The natural phenomenon that holds many mysteries is in the ocean and we know it like a Bermuda triangle. Well, on this occasion we will discuss the Bermuda triangle.

What is the Bermuda Triangle?

The Bermuda Triangle is a vast area in the Atlantic Ocean region which is considered to be a place of mystery because of many cases of loss of aircraft and ships without a trace after crossing the area. Until now, there has not been a definite reason that has been agreed upon on the reasons why many planes and also ships were lost. Because of these strange events, some people refer to this region as the “Demonic Triangle” or the “Deadly Bermuda Triangle”. Then, where is the exact region known as the Bermuda Triangle?

Location of the Bermuda Triangle

Bermuda Triangle is an area that is in the Atlantic Ocean. This region is called a triangle because of the points or boundaries of this region if it is connected to form a triangle. 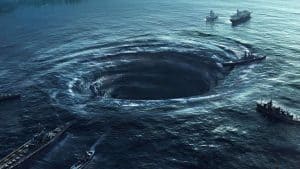 As mentioned above, there are several sources that state the history of the Bermuda Triangle region, but from some sources, it is not yet known which is correct because each scientist expresses his argument along with opinions. The early history of the Bermuda triangle began in the story of Christopher Columbus’ voyage. At that time, one of his crew members saw a strange light that resembled a meteor in the triangle area. Then Colombus also wrote that the navigation equipment did not function properly when sailing across the region.

After that, a very strange loss occurred which was about the loss of a ship sailing to an airplane passing over the triangle. The loss events were first documented by E.V.W. Jones in 1951 from the Associated Press magazine and later named it the “Satanic Triangle”. Then this news was rewritten by George X, published in Fate Magazine.

These reported loss events make the region named as the “Deadly Bermuda Triangle”. There is a source that states that under the Bermuda Triangle area, there is a very large pyramid, and even the pyramid is reported to exceed the size in Egypt. Then the distance between the top of the pyramid and the surface of the sea is around 500 meters. It was also told that at the end of the pyramid there were two holes.

Famous Events That Have Happened

Bermuda triangle is an interesting material discussed because the mystery that has not been solved until now. There have been many events that have occurred in the Bermuda Triangle region and all of them are events of loss. As for some of the world-famous events involved with the Bermuda Triangle area, among others, are as follows:

Those are some of the world famous events related to the Bermuda triangle. The events above are all events that have been a mystery.