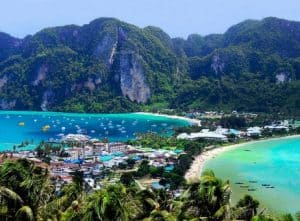 Andaman Islands in the last decade becomes the discussion between travelers because of the natural beauty and the historical heritage building of British colony. Beside that, Andaman Islands hides a mystery of primitive tribe in the islands. Supposedly, they are assumed to be dangerous and do not hesitate to kill any strangers. Until now, this primitive tribe are still secluded and isolated from the modernity. These are the history of Andaman Islands and the unique facts in it:

Etymologically, the name of Andaman came from the word “hanuman” which is one of the gods in Hindu belief. Hanuman is taken from Malayalam, the official language of South India and it is part of Dravida language. Andaman Islands is believed to have been occupied since thousands years ago. But based on the genetic evidence, culture, and language, it shows that Andaman Islands has been occupied since 30.000 – 60.000 years ago. Andaman native inhabitants are primitive tribes. The tribes were isolated and they have just opened the communication in 1850s. The tribes which are believed as the native inhabitants are main Andaman tribe, Jarawa tribe, Jangil tribe, Onge tribe, and Sentinel tribe that until now is still isolated from the other world.

Andaman Islands in pre-colonial era in the 17th century was the maritime basis for the ships from Maratha. Admiral Kanhoji Angre or Conajee fought against the colony by disturbing their cruise line through the maritime basis in this islands. In 1778 colonial occupation began. Austria established a colony in Nikobar islands. It used to be the colony of Denmark that released this colony as a lot of its people dead due to malaria.”Joseph and Maria” cruise was Austrian colony vessel that succeeded to occupy Nikobar islands. The native people of this island in 1778 signed an agreement to handover 4 islands to Austria, those are Nancowry, Kamorta, Trinket, and Katchai. In 1783 Austrian colony ended as the leader passed away.

The next colony was done by The Great Britain in 1858 after the first trial in 1789 – 1796 failed. The Great Britain established a colony in Andaman Islands to build a jail for the isolated prisoners that was called as Kalapan for the Indian independence fighters. One of Great Britain’s prison that still exists until now is Cellular Prison in Port Blair. The Great Britain occupied this territory until Japan did an invasion during the second World War.

Port Blair city became the target of Japan Military invasion and got occupied in 23 March 1942. Sikh Militia in Andaman Islands did not fight the Japan military when landing in Andaman. Japan, which is called as The Sunrise Country, destroyed all the evidence when leaving Andaman so that the episode afterward was untraceable. According to the native people of Andaman, Japan did persecutions and violence to the people in this island. In the next era, Andaman Islands territory was handed to Indian government in 2 October 1944. In 1950, Andaman Islands officially became the part of Indian territory.

A tsunami that smashed Aceh in 26 December 2004 affected Andaman Islands as well. As the effect of the tsunami, around 7.000 people of Andaman were predicted to die. Most of the native people were safe from this incident like Sentinel that could feel the big wave came from the earthquake, then they moved to the higher land before the high wave came.

In the 13th century, a very well known explorer, Marco Polo visited Andaman Islands. Marco Polo is even believed to have given a name for one of the islands in Andaman. It is Angamanain Island.

In Andaman, there is one isolated island and untouchable for everyone. This island is called Sentinel. This island is assumed as dangerous because there is a cruel primitive tribe in this island that is Sentinel tribe. This tribe isolate themselves from the outside. They do not accept the strangers and they do not hesitate to finish off whoever come to this island. That’s why the government assigned a prohibition not to come into this island whatever the reason.

6. Jarawa Tribe is Not Scary

7. Immortalized on The Banknote

The picture of Andaman Island is printed on the 20 rupee banknote. The banknote has 2 sides with picture of Port Blair, Andaman and Mahatma Gandhi.

That’s all the explanation about the history of Andaman Islands and the unique facts. Interested in visiting Andaman? Hopefully this article is useful for you.