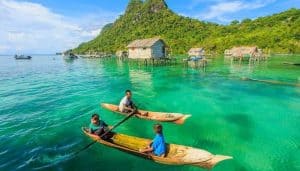 Besides the natural wealth, the natural beauty of Indonesia islands are also no doubt. Because of the value of the islands, Indonesia is frequently involved in the struggle with the other countries to claim the islands ownership. Bali, the most beautiful island in the world, even belongs to Indonesia. However, we are not going to talk about Bali and the other beautiful islands in Indonesia. We are going to discuss the biggest islands of Indonesia.

Papua island is a very valuable island. Why? Beside the cultural richness, this island is a gold mine. It is even the biggest in the world. This island contribute to the progress of Indonesian economy through Freeport Indonesia company.

Kalimantan is a very rich island because it has tropical forest as well as many kinds of mining. Diamond is one of the mining in Kalimantan.

Most of the people in Sumatera work as farmer to do farming. The products of Sumatera farming that become export commodities are coffee, palm oil, and many more. This island is divided into some provinces, those are: Aceh, North Sumatera, West Sumatera, Riau, Jambi, South Sumatera, Lampug, and Bengkulu.

The next island is Sulawesi. This island is located in the east side of Indonesia. It has a unique shape which is like the letter K or R. Sulawesi is rich of spice and herbs as well as Maluku province. Here is the information about Sulawesi:

Sulawesi has a very important role for the trading in Indonesia beside the variety of flora and fauna. This island is divided into 5 provinces: Mid Sulawesi, North Sulawesi, South Sulawesi, Southeast Sulawesi, and West Sulawesi. Sulawesi is also an island with a lot of mining wealth.

Java is a remarkable island. It is the government center and most of important people are from Java. Even though Java is populous, but it still has forest as the natural counterbalance. This island is divided into 6 provinces: Banten, Jakarta, West Java, Mid Java, East Java, and Yogyakarta.

That’s all some information about the biggest islands of Indonesia. Those islands are the part of Big Sunda islands cluster. I hope this information will be useful for us.