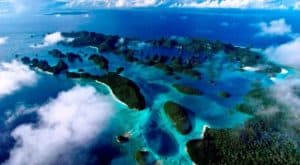 The contour of the earth is divided into land and sea. Almost 70% of the earth is sea and the rest is land that form islands and continents. Indonesia is a country in Asia, one of continents on the earth. According to Nur (2010), Indonesia is a special archipelago as it is rich of natural resources and well known as “The String of Equator Emerald”. Indonesia Archipelago is astronomically located in the position of  07º North Latitude – 12º South South Latitude and 95º – 141º East Longitude.

Beside that, Indonesia Archipelago is geologically located on the subduction of the earth plate like the subduction between Indo-Australia plate and Eurasia continent plate that lies from Sumatera west coast to Java south coast and straight till Nusa Tenggara. Because of this subduction, Indonesia has a lot of volcanoes especially in Sumatera, Java and Nusa Tenggara. The tightness of the volcanoes s affect the land around them to be fertile and productive. However, the active volcanoes nned to be aware of due to the eruption.

Beside that, the threat of cold lava flood especially in the rainy season mustn’t be forgotten. The subduction line of the earth plate in Indonesia archipelago is the factor of tectonic earthquake that happen regionally. And normally the damage is very bad.

According to geologist, the formation process of continents on the earth is divided into 2, those are:

In this chance, we will explain the history of formation process of Indonesia Archipelago from some viewpoints, those are:

The formation of Indonesia archipelago may be explained from the geological process that happened in the natural formation process, that is endogenous and exogenous. Endogenous power is the natural formation that comes from the dynamic activities of the earth. This activity made deformation of the earth crust then made the mainland formation because of the super power so that some islands in Indonesia were separated each other. This endogenous activity might happen because of the volcano eruption and earthquake.

These 2 activities caused a big vibration on the surface of the land or island that made avalanche on the parts or regions with high level of steepness. While exogenous is the process of the natural formation that comes from other factors out of the earth surface. This exogenous activity might come from the climate, rain, wind, and the stones temperature change that processed geomorphology.

Tectonic plate means that all the earth crust is the earth plate which is hard on the plastic liquid where the plates move away from the center so that it will reach the mid oceanic ridge and then infiltrate to the other plates through the subduction zone or shift to the other plates which is limited by transfault form with average speed 10 cm. So that the formation process of Indonesia archipelago can be seen from the islands along Indian Ocean and Pacific Ocean.

Indonesia archipelago is closely related with the islands tectonic movement that come from tectonic plate process. Indonesia archipelago is formed by 3 movements of the big plates, those are pacific plate in the west side, Indian ocean plate in the south side, and Asia plate in the north side. Activities of the 3 plates had happened since the Neogene era or around 50 millions years ago. And nowadays, the 3 plates are still active and make earthquakes from the small till the big one.

From the explanation above, we know that Indonesia archipelago is located on the line of ocean and continent plates. The plates do their activities like the rolling wheels and the plates are separated by border of which movement is convergent and divergent. As the effects of the activities, volcano eruption and earthquake frequently happen in Indonesia archipelago and these natural phenomenons affect to:

Some areas those are threatened by earthquake and volcano eruption are Krakatau island, Alor island, Sumatera island, Sulawesi island, Java – Bali island, West and East Nusa Tenggara because those areas are on the active plate and volcano line. So that the education of disaster mitigation in Indonesia need to be increased with formal socialization.