The formation of oceanic plates is thick on some oceanic backs. In the middle back of the ocean, magma erupts into the ocean where the crack zone lies. The addition of new rocks is then pushed the horizontal plate first created away from the cracks. The oceanic plate consists of oceanic crust. Its surface is enveloped by marine sediments derived from land which is granitic because it comes from the weathering of the continent.

The oceanic plates are divided into two crustal plates, they are large and small plates. The large plate is a plate that covers one ocean floor even covering the oceans and continents. Each of big plate is bounded by a mid-oceanic ridge, ocean trench, and ocean ridge. Therefore the small pate is formed by the convergence of the large plate. The characteristics of these small plates are to have fast and complex movements. 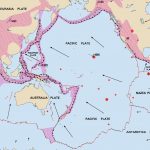 Pacific plate is the largest crustal plate on earth, it covers about 103,300,000 square kilometers of our planet. The deepest point in the ocean is in the Mariana Plate overrides the plate creating the Mariana trench.

In the Pacific ocean, it’s surround by large and small crustal plates. The plate movement in Pacific plate is caused by subduction zone that causes tsunamis, volcanoes to erupt and large earthquakes in each subduction zones.One the great example of volcanoes eruption is Mount Pinatubo in 1992. It’s an example of a composite volcano, this volcano is fueled by hot spots and spreading ridges where molten rock from the upper mantle flows out on the ocean floors creating basalt rocks. 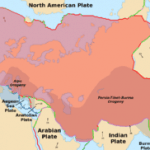 The Eurasian Plate is located in the most of the continent Eurasia. It’s a land mass consisting of the traditional continents of Europe and Asia. In this plate also includes all the islands in Europe and Asia.

Some of them include the United Kingdom, Japan, Philippines and Sri Lanka. The Eurasian plates have surrounding many of tectonic plates; on the South is Arabian Plate, on the East is Phillippine Plate, on the west and southwest are North American Plate and African Plate.

This plate moves north two centimeters every one year, it’s the third slowest-moving plate, behind the North American and South American tectonic plates. It is movement created by the flow of magma beneath the Earth’s surface. The magma will heat up and boils and then it creates convection of currents.

Its convections are magma heating, rising and then cooling when it hits the ocean water by creating new rock. Eurasian plates are moving with apart which is caused by spreading or rift valleys. Then, the new crusted is created by magma pushing up from the mantle, due to pressure and it will be colled down when contact with the ocean water.The example of the convergent boundary is like Iceland, The eruption was due to two plates converging and the magma also rising from the mantle due to pressure. 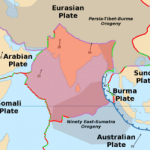 As the Indo-African boundary is divergent. The western Indo-Arabia boundary is transformed boundary which is lateral relative to each other giving rise. The boundaries of this plates are moving mostly in a circle. Though it’s trying to move Northeast, the other plates are pushing back and it’s rotating slightly.

The most common results of the Indian plate interacts with other plates are mountains, earthquakes, and occasional volcanoes. The Indian plate is still active and drifts at a velocity of about five centimeters per year, earthquakes occur in the northern part of the plate. The largest recorded earthquake occurred near New Delhi in 1950 and had a magnitude of 8.5. 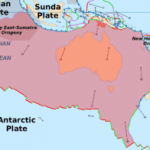 The Indo-Australian plate is one of the major tectonic plates which consists of the continental crust of the Australian continent and the Indian sub-continent. The Indo Australian plate is surrounding five major of tectonic plates, they are Arabian Plate, The North is Eurasian Plate, The southwest side is Antartic plates the western is African plates and the southwestern is Pacific Plate. 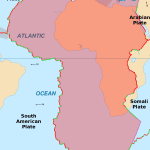 African plate lies between the continent and various surrounding of the ocean ridges. Around 60 million years ago, the Somali Plate began rafting from the African plate along the East African Rift. The movement of African plate is about 2.15 cm per year. It moves over the past 100 million years in a general northeast direction.

The African plate is bounded by the Red Sea Rift where the Arabian plate is moving away from the African Plate. There is largest volcanoes eruption in 2002 at Mount Nyiragongo in the Democratic The Republic of Congo.

The volcano erupted along fractures on the southern flanks. The lava flows reaching the nearby of the city of Goma, it left 120,000 people homeless. The African plate is known as the largest seismically active rift, it trends North until South parallel to the rift system. That’s why in here many big earthquakes happen. 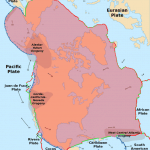 The North American plate was created approximately three billion years ago. It covers North America, Greenland, Cuba, The Bahamas and some part of Iceland and the Azores. This plate is the biggest plates because it covers 75,900,000 km squared.

The North America plate moves roughly a southwest direction away from the Mid Atlantic Ridge. There are a few hotspots found in here, the most notable hotspots are the Yellowstone (Wyoming), Raton (New Mexico), and Anaheim (British Columbia).

These are taught to be caused by a narrow stream of hot mantle convecting up from the Earth’s core-mantle boundary called a mantle plume. The Yellowstone and Anaheim hotspots are still geologically active to creating the earthquakes and volcanoes. 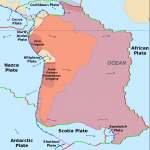 Moreover, it extends over 700 km and it’s currently home to more than 200 potentially active volcanoes as South American Plate. 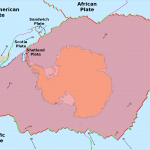 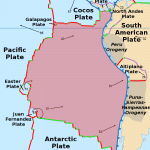 Nazca plate is the small oceanic plate off the coast of South America and it is the one of the fastest of any tectonic plate on Earth. It has five triple junctions where three different plates come together. In this plate also produced the largest earthquakes ever recorded by the seismograph.

There are two large earthquakes recent past, they are on May 22nd, 1960 that earthquake near Valdivia was 9.5 on the magnitude scale and on February 27th,2010 that in the Maule Region of Chile was an 8.8 magnitude earthquake. The other large earthquake that is happened on June 9th,1994 in the region of the Amazon forest and it recorded at the depth over 300 km. 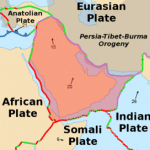 The Arabian plate is located in the middle east Region of Asia and it covers the area about 5,000,000 sq. It is formed boundaries with three major plates, the Eurasian Plate, African Plate and Indian Plate. The plate moves at about 4.65 cm per year in the northeast direction, it encompasses the continents of Africa and Southern Asia, along with its main water bodies of the Indian Ocean and the Red Sea.

The Arabian plate consists of the Arabian Peninsula that extends the northward to Turkey. The Arabian Plate is important because it incorporates most of the world’s oil receive, then in structures, the Arabian plate includes a wide range and subvariety of all the three rock types, the igneous, the metamorphic and the sedimentary rocks.

In the Arabian plate, there is divergent, it’s the three main tectonic boundaries. The boundaries which include the Red Sea and Gulf Aden, Zagros-Taurus and the Dead Sea respectively. At Arabian Plate there is a mud volcano in the Arabian Sea, it is noticed by the Pakistani fishers. It formed underwater when the layers of clay become pressurized either by a build of hydrocarbon gases or by tectonic activity.  The sediments that form Pakistan’s coastal plains and an offshore slope are been subducted by the Arabian Plate under the Eurasian landmass. 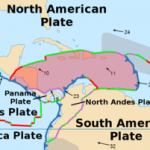 In Puerto Rico, there are trenches and it runs between the plates and it’s the deepest part of the Atlantic Ocean. The deep of trench is 8,400 meters deep. The Caribbean side of the trench is Hispaniola, Puerto Rico, and the Virgin Islands. 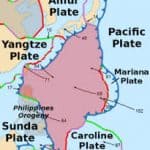 It consists of several microplates squeezed in between two convergent plate margins. There are two subduction zones in Philippines plate, they are Manila Trench, Northwestern and Philippine Trench, Southeastern.

This plate is made of oceanic crust and continental fragments and that distributed around the Scotia Sea. Before the formation of the plate began 40 million years ago, these fragments formed a continuous landmass from Patagonia to the Arctic Peninsula along an active subduction margin. The Scotia Plate is bounded by the South American Plate forming the North Scotia Ridge.

The North Scotia ridge is a left lateral transform boundary with a transform rate of thoroughly 7.1 mm per year. Besides the southern edge of the plate is bordered by Antartic Plate. It sliding at rate 7.4-9.5 mm per year that occupies the southern half of the Antartic Scotia plate boundary. One of the most prominent features in the Scotia plate itself is the median valley known as the West Scotia ridge The ridge consists of seven segments separated by right lateral transform offsets of various lengths. 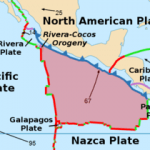 There is an island on Cocos Plate its name is the Cocos Island and it’s also the part of Costa Rica. There is no volcanoes or earthquakes. Besides, there is a hotspot located on the Galapagos Island which is the right on the boundary of the Cocos, Nazca, and Pacific Plate. 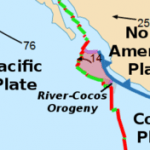 Rivera Plate is a microplate that is located off the west coast of Mexico, this plate has separated from the Cocos Plate located about five or 10 million years ago. Similarly to the Cocos plate, this plate subducts under the North American Plate along the Middle America subduction zone ate rate of approximately 30 mm per year.

This plate is composed of undisturbed oceanic crust, with only some regions that are structurally complex, it’s along with Cocos and Rivera plate. There is ever the strongest earthquakes in the history of Mexico which occurred on June 3, 1992, in the state of Jalisco. The quake had a magnitude of 8.2 with magnitude 7.8 aftershock, both of which caused widespread casualties and damaged.

Hopefully, this information about 17 characteristics of oceanic planes will help you to know what is the characteristic each plate in all over the worlds.