Home » earth » The Process of Frontal Rain and Its Description 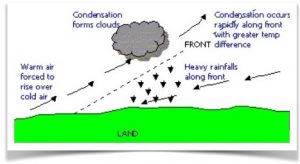 From all of nature phenomenon existed,the one we frequently know is rain. Rain is part of the water cycle. The water cycle itself is a process of water movement on Earth. And the water cycle is also the reason why water on Earth will never run out even if it’s used continuously. The rain that we often see as rain drops from the sky have various types. These types of rain can be seen in the following. One of them is frontal rain and we will learn more about the process of frontal rain and its description.

Rain has various types. The types of rain include the following:

Further Reading : 13 Effects of Acid Rain on Ocean That You Should Know

Those are several types of rain. These types of rain have their own process making that may be slightly different from one another. As for this time, we will discuss the process of frontal rain. The following is the explanation.

In addition, there is also a mass of hot air with high temperatures. Contrary to the initial condition, usually hot air masses with high temperatures are found in lower areas, such as beaches or lowlands. Because there are two different types of air, the area where the frontal rain occurs is called the front or border area.

The heavier characteristic causes water vapor carried by the mass of cold air and low temperatures to fall to the surface of the earth and conducted frontal rain.

Now those are some stages of the process of frontal rain and its description. The distinctive feature of this rain is that it occurs in the front area, where the area has two different types of air. Hopefully what we learn from this article is useful.

9 Quality Parameters of Water and Their Explanations