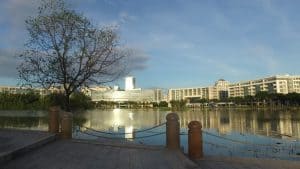 Not only Indonesia, as an ASEAN country, Vietnam also has various natural scenery starting from beach, like Ha Long Bay, and mountainous area like Marble Mountain. Vietnam also has another natural feature of lakes, both natural and artificial ones. Although there is no lake in Vietnam that belongs to the 10 largest lakes in the world.

Every lake has their own beauty, no wonder plenty of local and international tourists love to visit 6 most popular lakes in Vietnam. Besides that, Vietnam government put significant concern in tourism to improve tourist facilities, thus, the tourists rate will be increasing as well. Here are the list of lakes in Vietnam that you should visit:

This lake is quite unique since it’s located right after the Crescent Mall, the biggest mall in Ho Chi Minh City, also near the business district and elite residential area. Another uniqueness from Ho Ban Nguyet Lake is its curved dimension if you look at it from above. Due to its beauty and uniqueness, many local and international tourists loves visiting the lake.

Ho Ban Nguyet Lake is also called Crescent Lake, because it shapes like crescent moon, despite its shape is actually more like half circle. In the middle of the lake you can find a small island filled with plants. At the end of the lake, there is a beautiful garden which is popularly visited by local people for picnic.

Hanoi is one of the big cities in Vietnam, ‘Hanoi’ itself means ‘city of lake’, therefore this article would not be completed without explaining some lakes in Hanoi. Ho Tay Lake, or West Lake, is the largest lake with an area of 500 ha and perimeter of 20 km. The lake is located in the northwest side of Hanoi, and belong to one of the 6 most popular lakes in Vietnam.

Based on the history, the lake was originally created from Hong River channel, before the river stream stopped and changed direction. Once Ho Tay Lake was named Xac Cao, Kim Nguu, Lang Bac, Dam Dam and Doai Ho, the name was coming from the lake origin. If you look at the lake from above, Ho Tay Lake looks like crab claws that surrounded by Thanh Nien Road, the road itself parts Ho Tay Lake and Truc Bach Lake.

Ho Tay Lake is close to the spiritual life from Hanoi local people. The lake is so beautiful with bluish and wavy water surface, especially when purple crape myrtle flowers are blooming and flamboyant flowers are reflecting themselves on the lake. Ho Tay Lake is popular to be visited by couples and international tourists during holiday.

Hoan Kiem Lake is one of the popular lakes in Vietnam that gets famous due to its history. The lake is located in the center of Hanoi, it becomes exercise and nature education spots for people around the lake. ‘Hoan Kiem’ means ‘Returned Sword’, it’s coming from urban legend in Vietnam, Le Loi King. So it’s told that Le Loi King has magical sword from Gods. The sword was actually used to drive out Chinese conquerors. Afterwards the sword was given back to the Golden Turtle God who lived at the lake. There are some benefits of surface water for life.

Xuan Huong Lake is located in Dalat and becomes the city icon. The artificial lake is the largest lake in Dalat, Xuan Huong comes from female poet from Han Nom with family name Ho, thus, the name is similar to Ho Xuan Huong or Xuan Huong Lake. The best time to visit the lake is at night, you can find many activities during that time like walking, cycling, and having dinner since it’s close to a night market. You need at least 1-2 hours to finish walking around the lake. Visitors can also explore Xuan Huong Lake by using swan boat. You will get the beauty of Xuan Huong Lake during spring season in February. During that time, the blooming sakura flowers are escalating the lake beauty.

This Vietnam’s largest natural lake is the symbol of Ba Be National Park, the eight national park in Vietnam. There are some significant differences between sea water and mountain water. The lake length could reach 7 kilometers, the largest part could exceed 1 kilometer. No wonder that Ba Be Lake is suitable to be explored by boat. Ba Be Lake is surrounded by dense forest valley and karst mountain, make the lake as comfortable places for more than 550 plant species, 233 bird species, 106 fish species, turtles and butterflies.

This lake is relatively different than other lakes in Vietnam. The artificial lake is located in District Luc Yen and Yen Binh, being surrounded by thousand islands and hills. There are some advantages and disadvantages of groundwater. The lake has an area of 23.4000 ha, with 1.331 islands and hills, they are increasing the ecosystem diversities in the lake. There are biotic and abiotic ecosystems that you need to know. The islands and hills have their own interesting sides, since some of them has caves like Cau Cuoi, Bach Xa and Hum. Thac Ba Lake itself cannot be separated with the history of Thu Vat Battle in 1285. In the war, being led by Tran Nhat Duat, they successfully drove out Mongolian intruders.

Those are 6 most popular lakes in Vietnam. We hope this article is useful for your knowledge.

5 Lakes in Thailand You Need to Know

Examples of Volcanic Lakes in Indonesia

6 Lakes in Papua That Are Too Good...