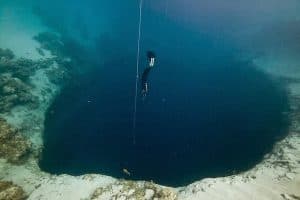 That’s the picture of the earth surface which is come off in the land ecosystem. What about the one under the sea? So far we see the ocean as a large water puddle without seeing the sea bottom directly. In fact, the sea bottom which is covered by water also have the relief which is not flat. That one is called as the sea morphology.

Under the sea, there are also high land, lowland and even the very lowland. There are sea mounts, sea troughs, sea mountains and many more. These all are not much different from the on the earth surface, just the position is under the sea. The one that we will discuss is sea trough or basin.

Definition of Sea Trough or Basin

The Factors That Form Sea Trough

Sea trough is a an earth surface that was formed because of certain process. The cause of sea trough form is the sink process of sea bottom or ingression. The sea trough was formed gradually. Therefore, so many sea troughs in Indonesia.

Advantage of Sea Trough or Basin

Sea trough is the sea bottom relief that have some function or advantage. Those are:

1. Shelter for many kinds of sea animals

One of its function is as a shelter for many sea animals. The animals which live in the sea trough are the animals that do not need sunlight and oxygen too much because sea trough is a very lowland. While sea plants are rarely found there.

2. As the research object

Sea trough is also one of area that can be used for research especially under sea research.

3. As the proof of under sea activities

Sea trough or basin and other under sea morphology is the proof that there are under sea activities such as geology and tectonism that involve some elements of the sea.

4. To decorate under sea view

Sea trough is something that contributes to beautiful under sea view, especially when it is together with other morphology.

That’s what we can explain about water trough or basin. Hopefully, it will be useful for you.