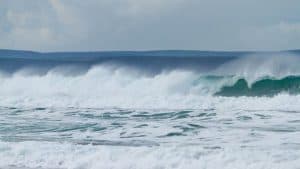 Water is one of natural resources we have on Earth, which is included as non-biological natural resource. The total amount of water we have is very large, even it’s larger than lands. The amount of water on Earth is about two third of the total.There is various form of water, such as ocean, sea, rivers, lakes, swamps and so on (also read : Be Aware! The 9 Most Dangerous Seas in The World). When we’re learning about water, of course we know that water has several characteristics. Some of the characteristic of water is stated below:

Pooled water, whether it’s small or large, also has characteristics. For the example is river. River has an elongated shape which makes the nature of water that flows to lower places is noticeable. And usually, the movement of water is called flows. River flows are visible from the surface, but flows that occur at sea are invisible on the surface. The movement of water seen at sea level is known to us as waves. Now on this occasion, we will discuss the differences between sea waves and sea currents. For more details, we will see the explanation below.

We already know about the understanding of sea waves and also sea currents. From the understanding above, we can see that the two is indeed different (also read : Differences in the Sea and Ocean based on the Segments). The difference is clearly seen from the direction of water mass movement, which tthere are vertical movement and horizontal movement. Then, is that all? Certainly not. The differences between sea waves and sea currents is as follows:

The first difference from sea waves and sea currents is the direction of movement. We know that sea waves and sea currents are mass movements of water (read more : Understanding Seawater Motion: Benefits). But both are very different. Sea waves are the movement of water masses in a vertical direction or up and down. This will make the mass of water does not move to other places, but only up and down. While sea currents are horizontal mass water transfer. This causes the mass of water can move from one place to another, so it is not surprising that objects that are dragged by sea currents can later move to far places.

The second difference between sea waves and sea currents is seen from the factors that influence it. The several factors influencing sea waves include the speed of the wind in the ocean, the length of time the wind blows in the sea area, the area affected by the wind, the depth of the sea water and the vibrations that arise at the bottom of the earth’s crust. Meanwhile several factors that influence sea currents include differences in salt content, temperature differences, wind gusts and differences in sea level.

Furthermore the difference between the two is seen from the location of the occurrence. Sea waves usually appear on the surface, causing sensations like waves. Meanwhile sea currents usually occur below sea level so that they are not visible from the surface. But keep in mind that if something is dragged into the middle of the sea, it is not because of the waves of the sea but because of the strength of the ocean currents that can move objects from one place to another.

Now that’s some information about ocean waves and ocean currents, specifically the difference between the two. Thus the information we can convey, may be useful for us all.

5 Differences in Tidal Waves and Tsunamis and the Explanations