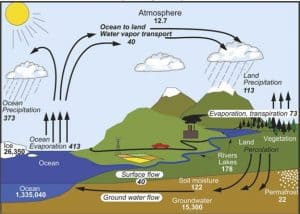 Water is a nature’s component which have vast amount. In fact, the amount of water on Earth is greater than the amount of terrestrial ecosystems existed. Therefore, water is a essential which is very important and needed by the community. And because of that, Earth has become a suitable planet for organisms, such as humans, animals, and plants. Water has a lot of functions and uses. Humans need water for various purposes, as in for drinking, bathing, washing, cooking, production, and so on. Meanwhile, animals and plants also need water to survive by fulfilling body fluids needed. Beside that, there are other plenty functions of water.

Every organisms certainly consume water on daily basis. If one person spend about 5 litres of water per day for their needs as drinking use, bathing use and other purposes, we can imagine how much water is used everyday. Then why does water on Earth never seem running out? Well, of course the answer is due to the hydrological cycle. The hydrological cycle is a cycle that describes the velocity of water on earth. Earth’s water experiences a cycle that makes the availability will never used up eventhough it’s used daily in huge amount. We will study the hydrological cycle components and the explanation below.

The water cycle is a cycle which involves continuous water circulation from its source turns into rain, and falls into ground and partly flows back to the sea. Some stages of the hydrological cycle include the following:

Evaporation is the starting stage of hydrological cycle. Evaporation occurs at water sources on Earth such as seas (also read : 17 Importance of Ocean in Hydrologic Cycle), lakes, rivers, reservoirs, swamps, and others. Like the nature of water which will evaporate when heated, this is how evaporation works. There are also various kinds of evaporation that happen to other organisms. Plants experiences evaporation which called transpiration, and humans also have it as respiration.

After the evaporation happens, the next stage is cloud formation. Water vapor resulted from evaporation will go up, carried by the wind or air. The water vapor on top will become one and form clouds that contain a lot of water vapor, or usually called as ‘cloudy clouds’. There are big formed clouds and some are small, depends on the level of evaporation.

After the process of cloud formation, then the clouds are increasingly rising to the top. The clouds will reach a saturation point eventually which causes the contained water vapor turn into raindrops. This transformation is called condensation.

When the water vapor of cloudy clouds get bigger, the precipitation stage will happen and the rain will fall down. The level of rainfall may vary: it can be heavy, very heavy, moderate or just drizzle. This depends on the previous cloud conditions.

Components of the Hydrological Cycle

The next component of the hydrological cycle is evapotranspiration, which is a combination of water evaporation and evaporation from plants.

The next component is condensation. Condensation is a process when water, dew, snow or ice are formed. This event occurs because of water vapor that rises to the higher layers of the atmosphere will experience cooling, and then the water vapor will change its shape from gas state to solid and liquid state. These dew, water, snow and ice are materials that form fog and clouds.

The next component is precipitation or rainfall. These dew, snow or ice will grow bigger and harder until we can feel it as raindrops. Raindrops has many form such as rainwater, snowfall, hail and so on in accordance with the condensation that has happened before. Precipitation or the formation of rainfall comes from clouds. The group of clouds that move around the world are arranged by air flow until it falls down.

Advection is the process of transporting water in horizontal movement, such as heat transfer or water vapor coming from one location to another, that is driven by horizontal air movement. Advection is one of the components of the hydrological cycle.

Rainwater that has fallen to the surface of Earth, especially on land will seep into the ground by flowing through infiltration through cracks or pores of the soil and rocks, and then it will reach ground water level and will become groundwater.

Read More : 7 Impacts of Acid Rain that Needs to Be Cautious About

Water can move due to the action of capillaries or water can also move both vertically and horizontally below the surface of groundwater, until the water will re-enter the surface water system. Some surface water is inundated such as lakes, reservoirs, swamps, and others and some are flowing back to the sea.

The rain that falls in the forest area sometimes does not directly reach the ground because it’s held up by leaves and by tree trunks. This is a result of interception.