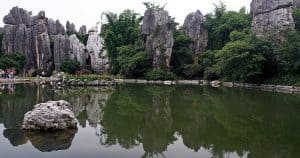 Experts stated that karst is a landscape with such specific hydrology cycle as a result of carbonate rocks (limestone and other rocks that are easily dissolved and have secondary porosity) development. In other words, karst is a region of limestone with steep contour, producing ridges, towers, non-uniform stoned hills, underground drainage systems and caves.

This Karst Lake: Definition, Characteristic, and Example article starts about karst in general. Karst development process, or karstification, is impacted by two determinant factors; controlling factor of dissolvable rocks, rainfalls, and exposed rocks on the level of water circulation; and supporting factor of temperature and closed land. Those two factors are affecting the karst landscape, rocks with high rate of CaCO3 are easily dissolved, high rainfall produces morphology of endokarst and exokarst. Exokarst landscape consists of doline, uvala, polje, and karren, meanwhile the endokarst contains caves.

According to the definition of karst from the previous section, karst lake is formed in limestone or karst region, getting dissolved, then producing a feature under the average height of its surrounding. Karst lake that has small diameter and area is called doline, on the other hand the lake is called uvala if it has such big diameter and area.

As other lakes, karst lake contains water, however you won’t find the water circulation system. The water of karst lake is always shrinking, then increasing again, or just dry, it mainly depends on the season.

Not only elaborating its meaning, this Karst Lake: Definition, Characteristic, and Example article also gives you some karst lakes example. Karst region is spread all over the world, in those area some karst lakes are formed due to the karst rocks weathering. Here are some examples of karst lake in the world:

Just like the top 10 largest lakes in the world, karst lakes in some places in the world can also become geopark or geotourism spot, since it has different characteristics than other common lakes. The lakes are also located in karst region, therefore when the water is shrinking, underground landscape is revealed and becomes attraction for tourists and researchers to observe its biological life.

For instance, Ayamuru Lake in Sorong has such biodiversity of Papua fish. One of the endemic fishes in that lake is Melanotaenia boosemani species, also known as Irian Rainbow Fish. Furthermore, karst lakes in Indonesia are commonly undeveloped, due to its extreme location, like steep and ununiform hill, that complicates the development process.

There are some water properties in the lake. Inconsistent water debit and volume also complicates the development of karst lake base. However, it’s still possible to develop the karst lake as fishpond, using fish cage, and power plant resource.

Thank you for reading this Karst Lake: Definition, Characteristic, and Example article.

The 6 Effects of Global Warming On North and South Poles

5 Lakes in Thailand You Need to Know

Examples of Volcanic Lakes in Indonesia

6 Lakes in Papua That Are Too Good...