7 Water Pollution Sources and the Examples

Household waste is the most dominant source of water pollution because of the effects of daily activities such as bathing, washing clothes or household appliances. This water from household waste can cause water pollution. This is certainly unavoidable given that most of the Indonesian people flow the water directly to the ditch that is channeled to the river.

The second dominant source of water pollution comes from industrial activities, both small and large industrial industries. This industrial activity certainly also produces waste in the form of smoke or liquid. This liquid will then be discharged into the drainage and cause water pollution. This industrial liquid certainly contains dangerous chemicals. Of course, it will be dangerous if it has been mixed with water and then used in daily life for those who live in the area around the industry. 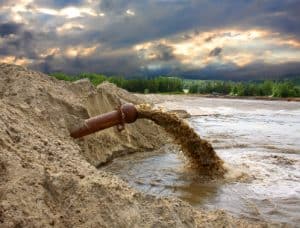 The third source after household waste and industrial activities is mining activities. Mining activities in the form of an oil emulsion production process will certainly produce liquid waste that causes pollution. This liquid waste from mining is categorized as dangerous because most mining products contain heavy metals (mercury) which of course damages the river’s ecosystem. Not only that, if the waste from the mine mixes with water then is used by humans to wash or bathe, it will cause the body to become susceptible to disease.

When used for washing, it will cause the fabric to become damaged quickly. This is due to the presence of chemicals in the waste. 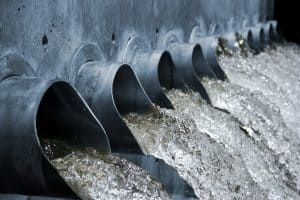 In a laboratory, of course, there are many experiments and many activities in looking for things such as looking for blood groups, looking for a certain pH, and so on. In this case, the residual liquid from the experiment results will be discharged into the water channel and certainly cause pollution.

The waste from laboratory results is certainly more dangerous than mining waste because this laboratory waste contains more dangerous and addictive chemicals so that if it is not prevented, it will have a negative impact on the water ecosystem.

Next comes from trading activities. These trade wastes are derived from oil waste which is an activity in a motorbike workshop, waste originating from street vendors, and so on. Waste from this trade has a lot of various substances, ranging from substances that have an impact that is not too bad to have a very bad impact. This trade waste is the dominant source of water pollution after household waste, industrial waste, and mining waste.

Water pollution will certainly have a detrimental effect on the environment and the community, so it is necessary to take measures to prevent water pollution. These efforts include:

That is a description of the sources of water pollution that occur in Indonesia along with prevention efforts to avoid pollution.

7 Impacts of Acid Rain that Needs to Be Cautious About