The Halodule pinifolia often grows among other species of seagrass in the Great Barrier Reef. It thrives in areas where the amount of sand is high. Also, sand that is a bit muddy can help support the growth of this species. Dugongs like to feed on this seagrass.

The Halodule pinifolia is able grow up to 20 centimetres in length. The width of its leaves often reaches between 0.25 milimetres and 1 milimetres.

As for the leaf, the tip is round. The vein of this seagrass is a dark colour. It separates into two veins at each tip of the leaf. 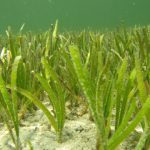 However, it’s actually quite ribbony and blunt. The width is around 5 milimetres or 9 milimetres. The edges of the leaf appears to be sharp and serrated at closer inspection.

At the base of the leaf, sometimes there are reddish bands. The seagrass is able to withstand most disturbances that occur in the water. 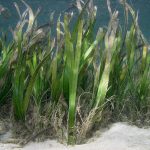 As for the width of the enhalus acoroides, it is around 1.75 centimetres. Another outstanding feature of the Enhalus acoroides is the thickness of the leaf.

Each of the leaf for the seagrass is very thick with dark veins running across. Due to the size of the seagrass, a group of it may form a wide and dense meadow.

Also read: Types of Jellyfish in the Great Barrier Reef 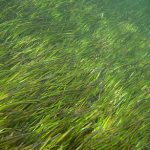 The wider leaf is preserved for the ones growing deep in underwater because they need to carry out heavy photosynthesis. Each root of the seagrass is able to grow around three seagrass. There are dark veins and scars on the leaves of the seagrass. 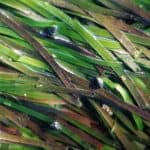 Unlike most seagrass that grow best in muddy areas, the Cymodocea rotuntada lives off better in areas that are sandy. The sand could also be a mixture of dead corals. The Cymodocea rotundata has a similar appearance to the Cymodocea serurulata. The length of this seagrass can be 15 centimeters long.

The width is between 2 millimetres and 4 millimetres. The Cymodocea rotuntada is straight with a slight curved structure. The tip of the leaf is blunt and a bit rounded. There are rings near the edge of the seagrass’ root.

Read more: Types of Stingrays in the Great Barrier Reef 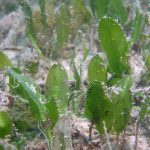 Other than that, it is also oval in shape. The seagrass can grow up to 25 millimetres with a width of 6 millimetres.

There are tiny hairs present on the front and the back of the leaf. The edges of the leaf are also jagged and sharp. There are also around 8 dark veins on each of the leaf.

Also read: Types of Dolphins in the Great Barrier Reef 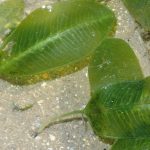 Each leaf of the seagrass has up to 12 dark veins on it. The are no hair present on both sides of the leaf. On the other hand, the roots of this seagrass are covered in hairs. The 80 centimetres long roots are vital to the sea floor. They help to maintain the stability of the sea floor. 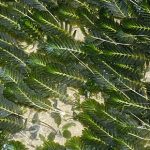 Read: Types of Seaweed in the Great Barrier Reef 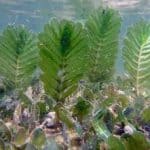 The Halophila minor is a small type of seagrass in the Great Barrier Reef. The shape of the leaf on this seagrass is oval. Usually, the grows in pairs on each seagrass. There are also around 12 darkly coloured veins going across each leaf.

Although the Halophila minor is a tiny species, it is able to endure a bad condition in the water. It grows best at sandy areas near the coral reefs. It is also able to thrive in muddy sand. The plant can also be found in deep parts of the water, often forming a wide patch of seagrass.

Read: Types of Starfish in the Great Barrier Reef 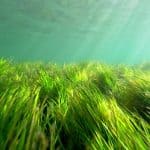 The Halophila tricostate is another type of seagrass growing in the famous reef. The plant can be quite big with the ability of growing up to 18 centimetres long. On each seagrass, there could be between 6 or 18 leaves. Each of the leaf on this seagrass varies from being 1.2 centimetres up to 2 centimetres.

The width of the leaf is an average of 4 millimetres. The edges of the leaf are serrated. The Halophila tricostata occurs mostly in the deep areas of the water. It can form a dense group of seagrass on the sea floor. 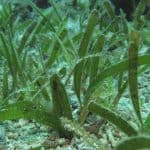 There are usually black patches on the leaves called tannin cells. Each of the leaf on this seagrass is smooth and round. There are veins going across each of the leaves. The Thalassia hemprichii prefers to grow in the deep parts of the water. 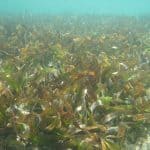 It can grow up to 15 centimetres long. The edge of the leaf is curled and the width is around 1.4 centimetres. The leaf can sometimes have a slight red strips. Moreover, the roots of the seagrass are very coiled. 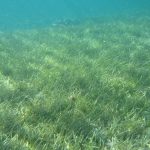 The Syringodium isoetifolium can be found in the shallow parts of the Great Barrier Reef. The depth of the water should not exceed 15 metres. The length of each leaf on this seagrass is around 30 centimetres in length. All the leaves of this seagrass are very bendy, often described like spaghetti, but the are also narrow.

The tip of each leaf is pointy and quite jagged. Around 3 leaves could grow out of one seagrass. The Syringodium isoetifolium is quite a fragile species. It cannot withstand the slightest disturbance that could occur in the water. 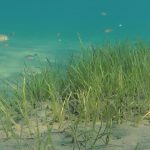 The Zostera capricorni is a common type of seagrass in the Great Barrier Reef. The leaves on the grass are usually long. The width and the narrowness depend on where the species grow since they are modified to keep the seagrass alive.

The tip of the leaf on this seagrass is usually round. This seagrass plays a role for providing a habitat to prawns that haven’t fully matured yet. 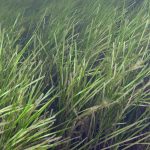 It serves as food for any marine animals and birds. It also provides a home to small fish and prawns.

These seagrass may seem similar to one another but they do have their own identities and roles. The seagrass is important to the Great Barrier Reef for providing food and habitat to the marine creatures