17 Types of Plants In The Great Barrier Reef 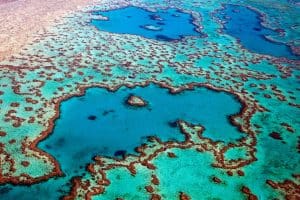 There are many types of plants in The Great Barrier Reef that many people don’t know. In a place that has such a great diversity of animals there are also exist the diversity among the plants.

The Great Barrier Reef has a lot of diversity because the place is still virgin and more over it is protected by the Australian government and the diversity will be more possible to increase rather than declining.

Even though this place is known widely because of the number of coral reef that exist there but what you need to know is that coral is not a plant. It is actually an animal that rely on smaller size of plants such as algae and phytoplankton to support their food and keep them alive.

And here, I would like to share you with about some information that I know about some plants that you can find in The Great Barrier Reef.

Mangrove is a small tree that you can find in the coastal area in the both salt and breakish water. The mangrove tree is help us to prevent the big wave into the land. The ability of mangrove also prevent the occurrence of sea abrasion and sea erosion.

This species of sea grass is also classified as a flowering plant since it has flower. Its rizome can grow and reach a number of 1 m long.

Asian surfgrass is the other types of plants in The Great Barrier Reef that you can find. This species of sea grass can be found until the depth of 8 m beneath the sea.

The physical appearance of paddle grass is slightly the same with Johnson sea grass. But the differences are it has a fine serrated leaf margin and also rounded tip of terminated paddle shape green blade. The existence of this species of sea grass is basically can be found through out the Indo – West Pacific areas.

Sea lettuce is also classified as algae specifically into green algae. The existence of sea lettuce can be found in the world’s ocean because its distribution is wide spread all around the world. This plant is eaten by some marine animals such as manatees. And you can also find sea lettuce as food since it is edible to eat.

See also: Types of Seagrass in the Great Barrier Reef

There are so many variety of seaweed as a delicacy that you might know. But then again, this species of plants is still classified into algae, a macro one. Seaweed can come from the red, green, and brown algae. It can live in the both sea water and brackish water. As a plant for sure you will find them most in the surface area or at least around the coral, but if you found them in the deeper water area that might be the seaweed coming from the red algae.

See also: Types of Seaweed in the Great Barrier Reef

Now we have kelp that usually easy to be found because it creates such a kelp forest beneath the sea. The kelp forest is important for sea urchin because it lives in there and it also feeds on kelp. It can grow up to 80 m long and also claimed as the plant that has the fastest growth rate.

Coralline algae has a beautiful color of it. It usually has a reddish color that is caused by the red algae. And the other color that can be found for the coralline algae species are blue, yellow, purple, white, green, and grey. The existence of coralline algae is really important because it has become the food for many marine animals.

Zooxanthellae can be found in the coral reefs because it has a symbiotic relationship with coral reefs. Coral reef will get its food from zooxanthellae and meanwhile the zooxanthellae will get the protection that it needs. Because zooxanthellae is classified as a plant that need a sunlight to produce its food then you will find most of its population in the depth of 100 m.

Just like its name, dinoflagelalate uses its flagella to move from one place to another places. Dinoflagellate also consider as the most primitive eukaryotes. And this is proven by a very first research done in Australia. This species of protista using sexual reproduction during autumn and  late summer.

Almost in every water or aquatic environment you can find the diatoms as the other types of plants in The Great Barrier Reef. Basically, diatoms mostly can be found until the depth of 200 m beneath the sea. Different types of diatoms also be found in a different place because they live based on the temperature and salinity of a certain environment.

So those are the types of plants in The Great Barrier Reef that I want to share with you. Hopefully by knowing the rich diversity in The Great Barrier Reef you can now trying to be aware to protect the environment surround you and also trying to protect the diversity that you met. Thank you so much for following our website and stay there be our loyal reader since we are going to have more interesting yet educated article about the deep ocean that you need to know.

Complex Knowledge about Seaweed Life Cycle Along with...

The Amazing Uses Of Sea Plants For Medicines...