Atlantic Ocean is known as the smallest ocean compare to the other oceans. And most people will know that in this ocean there are only some species of marine mammals that live there. However, actually there are more animal species that live in the Atlantic Ocean. One of them is our little size animal known as a crab. Crab it self can live in the both land and sea. You can find crabs in almost everywhere since it has so many species which diverse them from one to another based on their ability to adapt with the environment.

Till now, there are known about 850 species of crabs in the freshwater. There are some types of Atlantic Ocean crabs that I would like to share you with today.

In the first list we have atlantic rock crab or also known as Cancer irroratus for its scientific name. This species of crab can’t be underestimated because of its small size which is only about 13 mm. Aside from its size, this small crab can actually be found in the depth until 790 m beneath the sea. 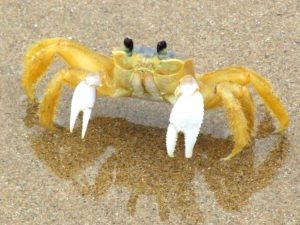 Atlantic ghost crab or also known as Ocypode quadrata for its scientific name can also be found in the Atlantic Ocean. This species of crab actually living in the stradline and not literally beneath the ocean.

Furthermore, what is unique from atlantic ghost crab is that when it digs the burrow as a house for them they will produce a bubbling sound that is caused by their claws.

See also: Types of Jellyfish in The Atlantic Ocean

The other types of atlantic ocean crabs is known as Corystes cassivelaunus. Masked crab has another name known as helmet crab, and also sand crab.

On the other hand, This masked crab is also classified into small size crab because its size is only about 4 cm. About its habitat, masked crab loves to burry them self inside the sand. You can found in sandy beaches. It from the lower shore to depths of around 100 meters.

However, some of them can also be found also in the depth of 100 m occasionally. They usually live in the shore or caves beneath the sea. Furthermore, this type of crab is known as sleepy crab.

Next, we have atlantic blue crab or also known as chesapeake blue crab or simply just blue crab. This species of crab that has a scientific name of Callinectes sapidus can reach a number of 23 cm in length for its carapace.

The size of blue crab is quite big if you want to compare this species of crab with the previous crab that I have described to you. 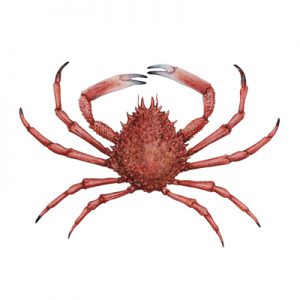 Even though this species of crab looks scary but it is edible to eat, and even it becomes an object for fishery where there is about 5000 tonnes of european spider crab that is caught every year.

Horseshoe crab is one from many animals species that is still alive till now since the jurassic era. And because of that horseshoe crab is also known as a living fossil. It has a hard shell that protect its soft abdomen. They actually live in the shallow water and prefer muddy areas.

Snow crab also has another name in another region such as spider crab and or queen crab. Little is known about this species of crab, but just like its name which is “snow”, the existence of this species of crab can be commonly found in the cold area such as Atlantic.

Snow crab is classified in the genus of Chionoecetes where the Chion means snow. Meanhwhile, Snow crabs often can be found in  cold water temperatures. It sometimes occur at a wide range of depths, from 20 to 2000 metres. As well as you can find in sandy and muddy bottoms

In the Atlantic Ocean, this species of crab nearly can be found everywhere since it can adapt with any kind of substrate.

The presumption about the existence of this that dungeness crab is being brought by fisherman from Pacific Ocean to the Atlantic Ocean.

To find this species of cute yet small crab you need to go to the western part of Atlantic Ocean. Fiddler crab is also known as a calling crab and they are closely related to ghost crab.

A unique fact about this crab is that its shell can turn into dark color at day and bright color at night. To recognize the existence of fiddler crab is actually quite easy since it has asymmetric claws where one claw is bigger than the other one.

Little is known about this species of crab. Ucides cordatus can be found along the Atlantic coast which is from Florida to Uruguay.

The existence of this species of crab is really important to the ecosystem since it helps to process the leaf litter. To find this speciesis crab is quite easy since it lives in the shallow area which only take about 1 m depth.

On the other hand, The forages of Ucides cordatus, or also known as hairy crab, is active during the day.

Even though the crab is live in the depth of 15 m but it will take place in the shallow area which has the depth about 1 m to give a birth. Usually the reproduction will begin in May or June. Furthermore, it claws are strong and their fingers are black.

Last but not least we have Callinectes danae that is classified into swimming crab. And because of it is classified as a swimming crab, this species of crab also has paddles to help them swim better in the ocean. Its carapace has a brown color but its leg has blue color.

Even though you can find this species of crab in Atlantic Ocean, but to find a huge number of this crab population you can go to Brazil or West Indies.

So those are some types of atlantic ocean crabs that I can explain to you. Now, you know that there are also crab exist in the Atlantic Ocean and not only whales. Thank you for reading this article and keep following our website. Hopefully, all article that we wrote can inspire you to know, care, and aware more about the deep ocean ecosystems.