13 Importance of Dinoflagellates in Marine Ecosystems 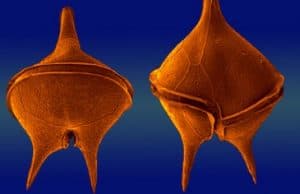 Dinoflagellate is included into phytoplanktonic organism group that reside in ocean ecosystems.  There are some importance of Dinoflagellates in marine ecosystem.

In the deep sea, this creature plays an important role in food web in order to balance the ecosystem energy fluxes.

Besides in the deep ocean ecosystems, this little organism can also be found in estuaries, mangroves, even they live in benthic environment and in sea ice.

It also exists as well in other marine organisms such as seagrass, epiphytes of seaweeds and corals.

Although it plays crucial role to balance the energy fluxes, however this creature brings threat to marine ecosystems. It has been reported in recent study that Dinoflagellate is the major cause of the existence of a type of algae in the ocean called algae blooms (HABs) which sometimes can be called as ‘Red Tide’, it can bring the result of the death of some marine mammals, even effect the human’s health because of the effect of toxins which contaminate the consumed seafood throughout the food chain.

As this organism produces sea toxic called red tide, it can be a reason to be careful before eating seafood for example; shellfish. The poisoned shellfish is mostly caused by the accumulation of dinoflagellate toxin inside shellfish which will be eaten by humans. The only reason why it produces HABs is to kill the rivals and some potential predators, however, it is still dangerous.

However it came into being bad creature as it brings Red Tide, it is good to look at how the ocean environment needs dinoflagellate. Here are 13 reasons why dinoflagellate should remain exist in the marine ecosystem:

Dinoflagellate lead the food chain in aquatic ecosystem. They naturally bloom at the surface of the ocean and bring detrimental effects to environmental health of damaged ocean ecosystem

This is a good deal to have massive dinofalgellate in the sea. The first reason is because they emit bright blue light or can be called as bioluminescene. Under the high concentration and be seen in the night, the existence of blue light’s dinofalgellate can bring breathtaking effect.

Bioluminescene is an blue light exist in the water. It is produced by phytoplankton including dinoflagellate. There are some benefits of this bioluminescene especially to help the fish to find food by using its unique way to attract prey.

The other surprising fact about this tiny is that it does not need eyes or clock to know when the daylight is. They instantly know by nature when the sun rises to start the photosynthesis process.

The unlimited wide of ocean might look challenging for tiny creature like dinoflagellate. But, in fact, they have proven to ensure their future to make them live super long. When the marine condition is just right, they will form cysts around. Their cysts will travel to the bottom of the sea until to the sea floor. Basically they are able to make their own clone. Because of their multi-staged life cycle, this creatures are able to live in a super long period of time. Pretty wild, aren’t they.

The next reason why the ocean environment needs this creature is because the recent research has revealed that the massive existence of dinoflagellate can be used to monitor climate change including some characteristics of ocean temperature. Among planktonic organism including dinoflagellate, the genus neoceratium, has already been mentioned as good climate change monitor water masses and also describe the sea circulation.

They have high sensitivity and able to display disturbance and climate change over time. The neoceratium cell in dinoflagellate can easily be recognized by analyze their tyical morphology size and their dominance.

Dinoflagellate is able to create symbiotic mutualism with other ocean organisms. It can occupy other sea creature without bringing harm, for example it occupies sea sponges, corals, jellyfish and even flatworms. The host provides save place for dinoflagellate and dinoflagellate invest carbohydrates which the host needs.

It has been explained above that dinoflagellate have a good ability to adapt any environment. There are several studies that shows the effect of temperature of dinoflagellate can form symbioses to prohibit destruction of coral reefs as the climate change can bring damage for coral.

Apparently, dinoflagellate is the producer of marine environment as it produces carbon fixed which appear due to their photosynthesis process. The process turns the sun light into energy for continuous survival in the under water. Besides, this microorganism absorb nutrients and inorganic carbon from the water and fixed the carbon through calvin cycle to produce carbon dioxide molecule.

As dinoflagellate helps to maintain coral ecosystem in the sea, it naturally helps coral to produce nitrogen which is an important nutrient for the plant and animals that live in the water. The symbiotic relationship between coral and dinoflagellate is associated with the mutualistic bacterial communities. This is known as bacteria group that is able to fix nitrogen (diazotrophs).

It has been mentioned that Red Tile which mostly produced by dinoflagellate causes many harms in the aquatic ecosystem, but recent studies of Florida red tides has shown that red tile contain a compound which is called K. brevis. This compound acts as a blocker. This compound is evaluated as a possible treatment for lung disorder.

Despite as the red tile causer, dinoflagellate plays an important role as ecosystem maker in the ocean. It produces oxygen, carbon, nitrogen and act as the foundation to save the coral reef population.

Those are some importance of Dinoflagellate for marine ecosystem. Hence, by knowing this science people will get more informed about how to maintain aquatic ecosystem.

15 Importance of Algae in Ocean Ecosystems