15 Impacts of Oil Spills in Oceans You Must Know 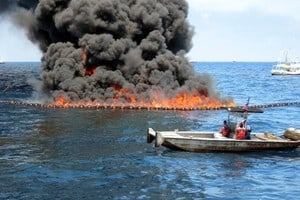 Oil spills in oceans are often considered as disasters that touch on a lot of different areas. Their impacts are wide, ranging from marine lives, atmosphere, people’s health and many more.

To fully understand their devastating consequences, here are the 15 Impacts of Oil Spills in Oceans that you need to know. The damages and the deaths that they can cause are catastrophic.

Oil spills are deadly for marine creatures in the oceans. They can cause hypothermia in mammals with fur such as the sea otters or seals. The oil can also damage the organs of the fish, resulting in instant death. The death of marine creatures is always a loss as that will affect the whole food chain. Some creatures could already be endangered ones.

Sea birds like the pelicans can also become the victim of oil spills. As they search for food in the contaminated ocean water, they are drenching themselves in oil. That will add more weight which will prevent them from flying. Instead, they drown and die.

Oil spills may affect some areas where they are crucial for the migration of birds. Those birds won’t be able to go to the places they usually do because of the disaster. This will cause a disruption in their migratory patterns. The birds will find it difficult to find resting places or to find food.

Marine plants are very susceptible with their environment. Sudden changes will cause them to die. Oil spills in the oceans will damage plants such as seaweeds, kelp or seagrass. They can become coated with the oil. Not only will that cause a decline in their health, marine creatures in the ocean water will suffer too.

Beaches are impacted by oil spills as well. The sand and the gravel in the beaches will come into contact with the toxic oil. Afterwards, they become heavily polluted and dirty. The oil damages the ecosystem around the beaches. Also, sediments that are considered too dirty might have to be replaced with cleaner ones.

The oil spills in the ocean will have the chance of destroying important marine habitats. For instance, the salt marsh and mangrove trees. Both of those habitats provide unique marine environment for various marine lives. Marine plants will decrease and marine creatures will lose their homes.

Breeding grounds for marine lives are important. They enable the marine population to go on. However, oil spills can damage those grounds. Either offshore or under the water. Sea turtle’s eggs are vulnerable to this kind of disaster. The eggs won’t be able to develop and hatch if they come into contact with the oil. Even if the eggs hatch, the newly born turtles won’t make it out of the oil polluted beach.

It won’t be safe for anyone to visit beaches if they become heavily polluted with oil. That means no more swimming in the ocean, surfing and snorkelling. Those of you who love to frequent the ocean will definitely be devastated. This is one of the most visible impacts of oil spills in the ocean for humans.

Fish stocks can significantly affect the economy and the wellbeing of the people around the world. With the oil spills in the ocean, there will be a decline in the number of the fish that can be distributed. This will mean that people will have less access to consume their seafood.

Tourism activities will be negatively impacted by oil spills. There will only be limited things that people can do. There may even be a shortage of seafood supply or concerns about their safety. Restaurants may experience some loss due to the declining tourists. Hotels will also be going through the same thing.

12. Spread Oil Spills to Other Areas

Oil contains many chemicals that will lower the air quality. The chemicals evaporate into the air and disperse. They can affect people’s health in negative ways. Direct exposure may cause eye irritation, dizziness and sore throats. Breathing the toxic air may even cause long term health problems. There have been cases where people develop cancer.

14. Reduce Amount of Oxygen in Water

Dissolved oxygen in the ocean water is critical for the survival of marine creatures. But oil spill can reduce the availability of that oxygen. As more and more oil dissolves in the water, the oxygen is replaced. This will endanger many lives within the ocean ecosystem.

See also: Importance of Oxygen in the Ocean

Oil spills in the oceans can actually ignite fire. Many lives are lost once it happens and the number could increase during the rescue process. The fire caused by the oil is a hazard for the air. The smoke will pollute the air which will in turn be inhaled by people. It can also take a while to put out the fire and clean up the oil. In fact, there may even be the chances of the fire spreading to other parts of the ocean.

It’s always a serious case when oil spills into the ocean. The road to recovery will be long and the effects might be felt years after it happened.

15 Ways the Ocean Affects the Land

17 Effects of Ocean Pollution On Tourism