History of The Dead Sea and 9 Unique Facts Behind It 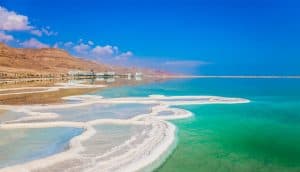 As a planet which has larger water zone than the mainland, earth is well known as blue planet. We should know that water on the earth has many types, such as ocean, lake, river, swamp, sea and many more. Each type of water has different characteristics in each area. It depends on the geography and astronomy of that territory.

The Dead Sea gets the water sources from Jordan river with 41.650 km2 width water collection space with maximum 67 km long and maximum 18 km wide. The water volume in The Dead Sea is approximately 147 km3.

History of The Dead Sea

Based on the research, The Dead Sea was geologically formed since 3 million years ago when a small crack happen in Jordan Riff Valley. On the same time, water from the sea flowed into the crack and finally formed a lake. The dry climate condition and high evaporation made the mineral in the water changed. And the salt, gypsum, and calcium around the crack formed a lake with high concentrate salt.

Name of The Dead Sea was given, not without any reasons. It contains very high salt so that no living creatures found in the water. That’s the reason why this lake is called as The Dead Sea. The salt in The Dead Sea reaches 33.7%, while average salt content in whole sea in the world is 3.5%. You can imagine the taste of The Dead Sea.

The Dead Sea can’t be separated from history of the world religion such as Christian and Islam. It is written a lot in the Old Testament but in Hibrani language only which is “Yam ha-Melah” that means Salted Sea. In a prose, The Dead Sea is called as “Yam ha-Mavet” which means The Sea of Death due to no creature can live in it. Beside that, there are still a lot of names for The Dead Sea such as Asphaltite (Greek), East Sea, Zoar Sea, and Arabian Sea.

Unique Facts of The Dead Sea

It doesn’t just present the nice view, but The Dead Sea has some unique facts as well, those are:

That’s all the explanation about The Dead Sea and some facts on it. Hopefully this information is useful.