Home » sea » Correlation Between River Flow and Salinity in The Sea 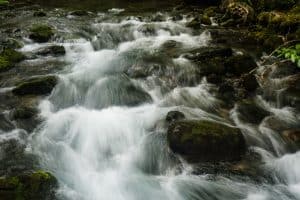 As a planet of which part of it is water, no wonder if this planet has various kinds of water. One of the water territory is the water surface. The water surface itself is the water that is gathered on the ground or water spring like river, lake, sea and other wet areas. The water on the surface is the result of precipitation and naturally getting subtraction because of evaporation process and seepage to the ground so that the seepage later on becomes ground water.

One of surface water on the land is river. River belongs to tasteless water that flows from mainland and ends in the lake, river, or sea. And the water source of river can be from rain or melted glacier and water spring that flows from high land to the lower land. In the beginning, the water conduit of a river is small and narrow. Over the time, the water flow scrape the stones along the river so that the water conduit becomes wider and longer.

If we talk about river, it is related with the flow. As explained above that the water flow will end to the sea. So, no wonder if the river flow and the sea are related each other. You might have wondered if the water flow ends to the sea, why the river is not salty? So where the salt comes from? The explanation here will answer those questions. So let’s pay attention to it.

Explanation for The Correlation of River Flow and Salinity

Before talking about the correlation between the river flow and salinity, we had better to know first the factors that affect salinity. Those are:

One of salinity factors of the sea water is the river flow to the sea. In fact, the river flow also contains mineral and salt from the stones in the bottom of the river. As the time goes on, water of the sea becomes salty because of many salt in it.

The river water is tasteless, isn’t it? How can it make the sea water salty?

Basically, all water flow in the river contains salt and mineral. The rain that falls from the sky also contains mineral and salt, however it is very low. So are the river flow from glacier and snow. The water flow also scrapes land and stones along side the river. The water flow only brings salt and mineral from stones and land. That’s why when the flow ends in the sea, there will be sediment of mineral and salt that make the sea salty.

So, the reason why the river is not salty is because it flows to the final end which is the sea. While the sea itself doesn’t have the sewer. There is only one way to reduce the water of the sea which is evaporation. However, this process leave sediment of salt and mineral on the sea bottom. It also happens to The Dead Sea which is well known as a sea with high level of salt. This is because The Dead Sea doesn’t have gutter like river. So that the water of The Dead Sea will be very salty.

So, that’s all the explanation on the correlation of the river flow and salt of the sea. Hopefully, it will be valuable for your knowledge.